Diggs, who won a Tony and a Grammy award for his Broadway debut as the Marquis de Lafayette in the musical juggernaut Hamilton, spoke to a packed house in Colton Chapel April 10 as the Senior Speaker, an event sponsored by Lafayette Activities Forum, Senior Year Experience, and the Class of 1963 Speaker Endowment Fund.

The actor/writer/rapper/producer earned notoriety in Hamilton for his charismatic, commanding stage presence—and his ability to deliver 19 words in three seconds (a Broadway record). He was lauded by many in the theater community as the breakout star of the show.

While any artist of Diggs’ stature would be welcomed and celebrated on campus, the fact that Diggs stole the spotlight while bringing the College’s namesake (a.k.a. “America’s favorite fighting Frenchman”) to life only enhanced the buzz and excitement surrounding his visit.

Hamilton fans weren’t just in the audience. Associate Professor of Theater Mary Jo Lodge was thrilled to get to share the stage with Diggs, serving as moderator of the Q&A event. Lodge has seen the performance three times; her first show was its third day on Broadway—before all the hype (and exorbitant ticket prices). The very day of Diggs’ visit to campus, Lodge received word that her book proposal about Hamilton—Dueling Grounds: Revolution and Revelation in the Musical Hamilton—had been accepted for publication by Oxford University Press.

Diggs spent just about three hours on campus (a tad longer than the runtime of Hamilton)—enough time to leave quite an impression. In addition to being whom Lodge described as “an enormously personable and compelling person,” Diggs held doors open for students, took selfies and signed autographs, and even complimented the artistic talents of our own Lafayette community (more on that below). Here are six memorable takeaways from his visit.

Because not many people had heard of him prior to Hamilton, Diggs said there’s a tendency to label him an overnight success. He pointed out that he’s currently 36 and was 34 when he took the stage in Hamilton. And, so, do the math. “I had a lot of years of challenges,” said Diggs, who graduated with a theater degree from Brown University. “The first time I tried to live in New York after college, I had no money. I surfed on couches. Luckily, I had a lot of friends, a lot of couches to surf. And a lot of my friends’ careers were taking off—they were becoming doctors and lawyers, so they said, ‘come sit, you are an artist, and we have hella couches for you.’” 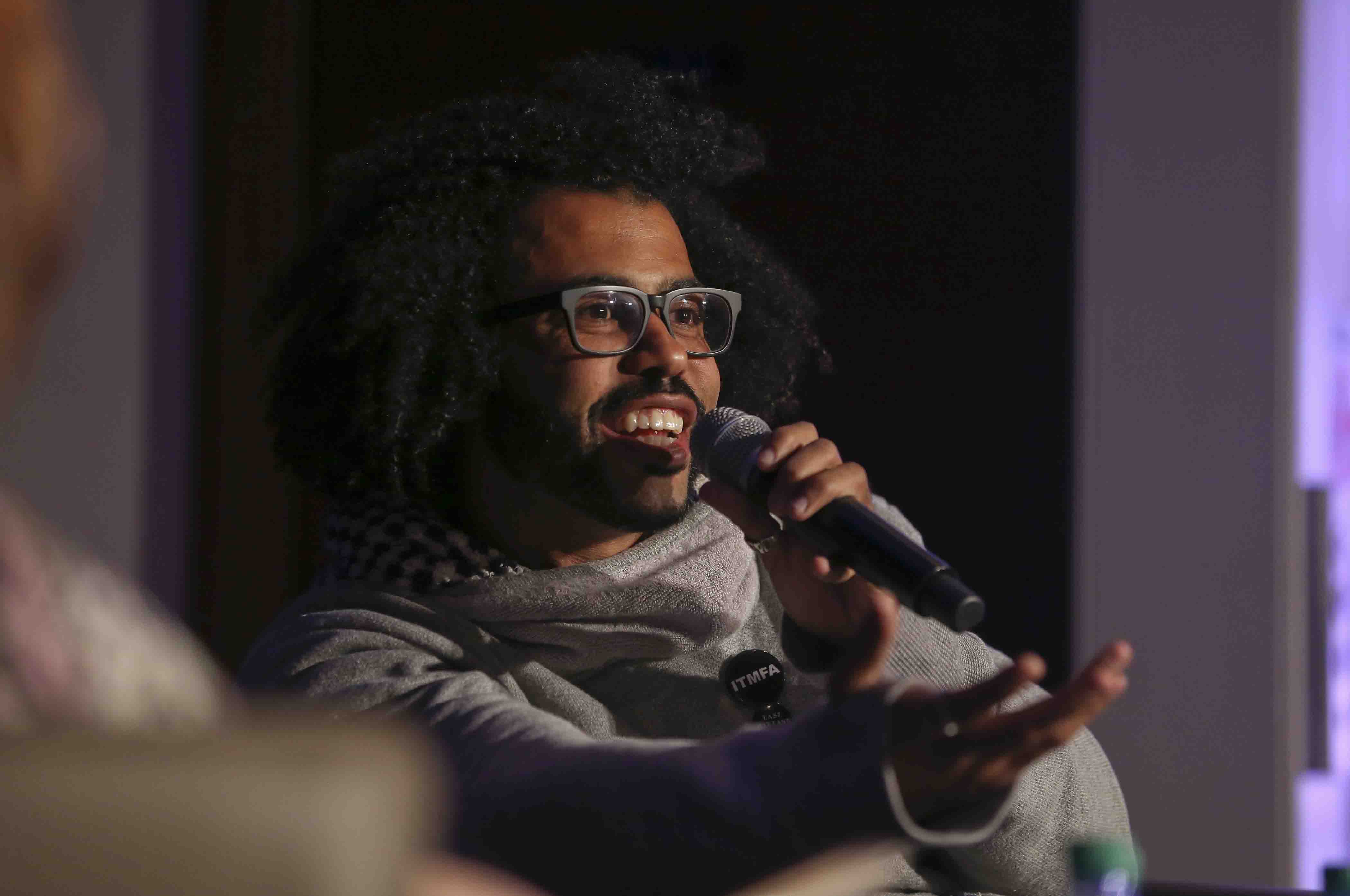 … and success can come when you least expect it.

After struggling for nine months in New York City, he moved back to California. (He grew up in Oakland.) He joined a Shakespeare company in the Bay Area, taught poetry classes, and worked as a substitute teacher. One day in 2008, he arrived to teach, and due to a scheduling error, the school double-booked two subs for one class. Diggs and the other teacher made the best of the situation and tag-teamed teaching the class for the day. Turns out, the other sub was a freestyle rapper, like Diggs, and ended up introducing him to Lin-Manuel Miranda, who would go on to create Hamilton. “That just goes to show that you never know … a terrible job could end up becoming a pretty good job,” he said. 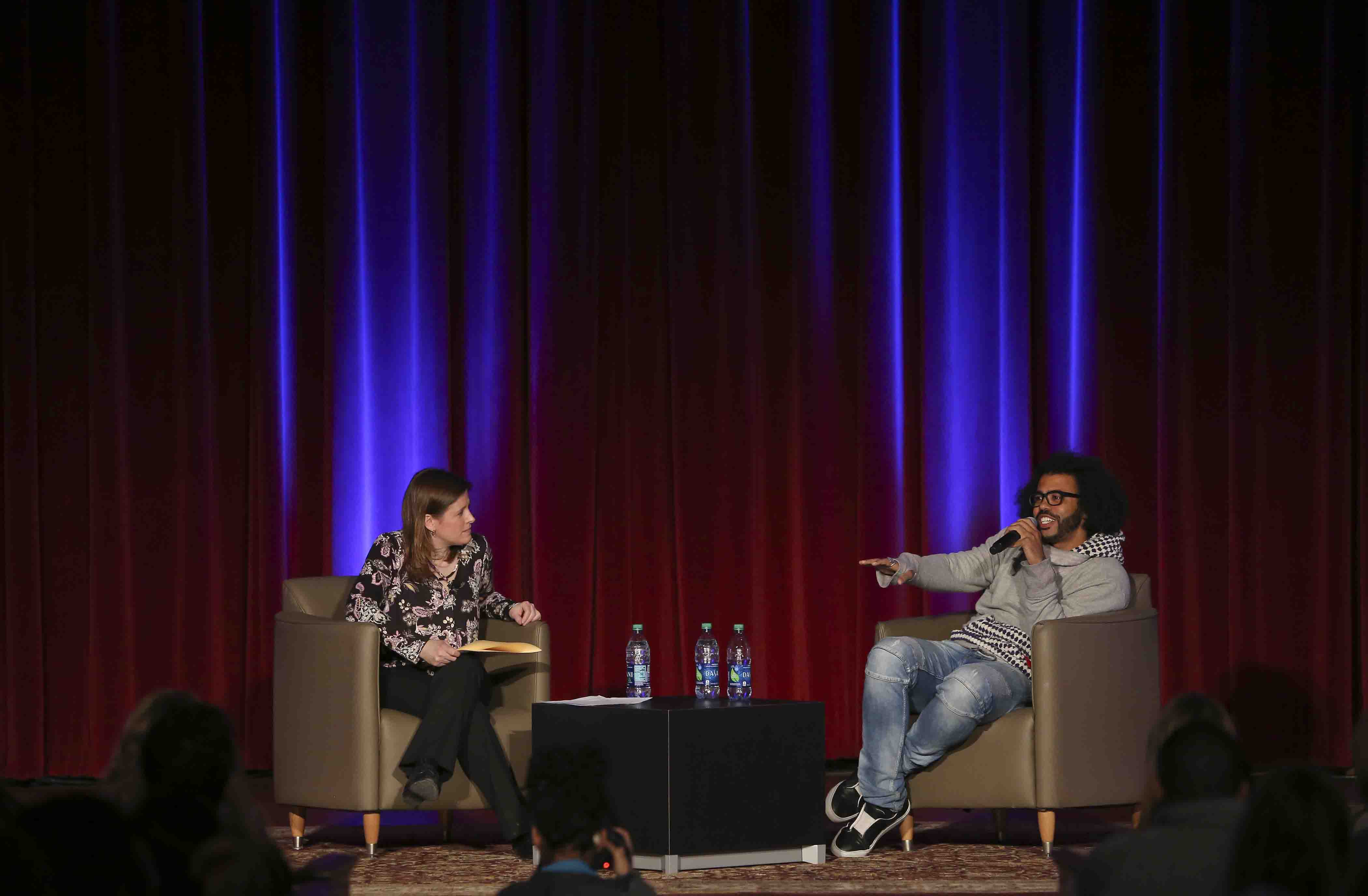 Be open-minded about projects.

When Diggs first heard the concept for Hamilton, a hip-hop adaptation about the life of Alexander Hamilton and the American Revolution, he said, “That’s a terrible idea.” But Miranda’s work convinced him otherwise. “Lin was making these demos,” he said, “and it was clear that they were going to be really good songs. I would listen to them, he would do all the parts, and I was like, man, this is good. I don’t want to like this, but this is good. I realized it was special.” 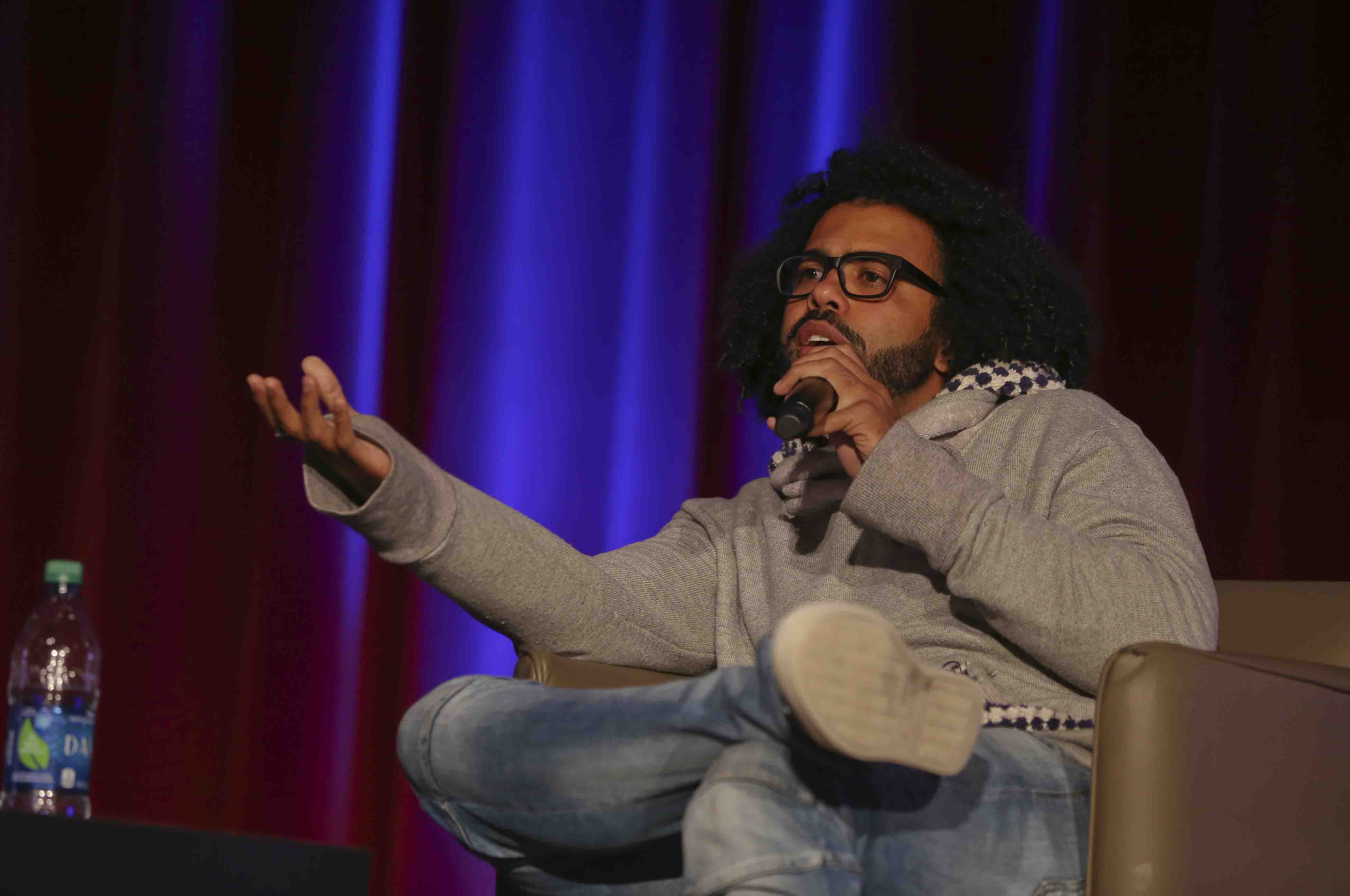 … but also to listen to your gut and keep trusted friends close.

Diggs said that in the entertainment industry there are times when you are pressured to make decisions quickly, and you might feel rushed into something. “In certain situations, you’ve got to trust your gut,” he said. “Sometimes, you have to make these instinctual decisions. It’s easy when you don’t have a lot of choices; you might need to say yes to something to pay the bills and put food on the table. But you need to watch out for things that feel wrong.”

Not only will good friends offer you a couch to sleep on, but Diggs said they will help you stay true to yourself and make good decisions. “As you start developing a team of people around you, you need to have people who you trust and who know you,” he said. “Keep friends who have been with you from day one close. You need people who know you as a human being and who respect you and love you and who help you not lose the person who you are.” 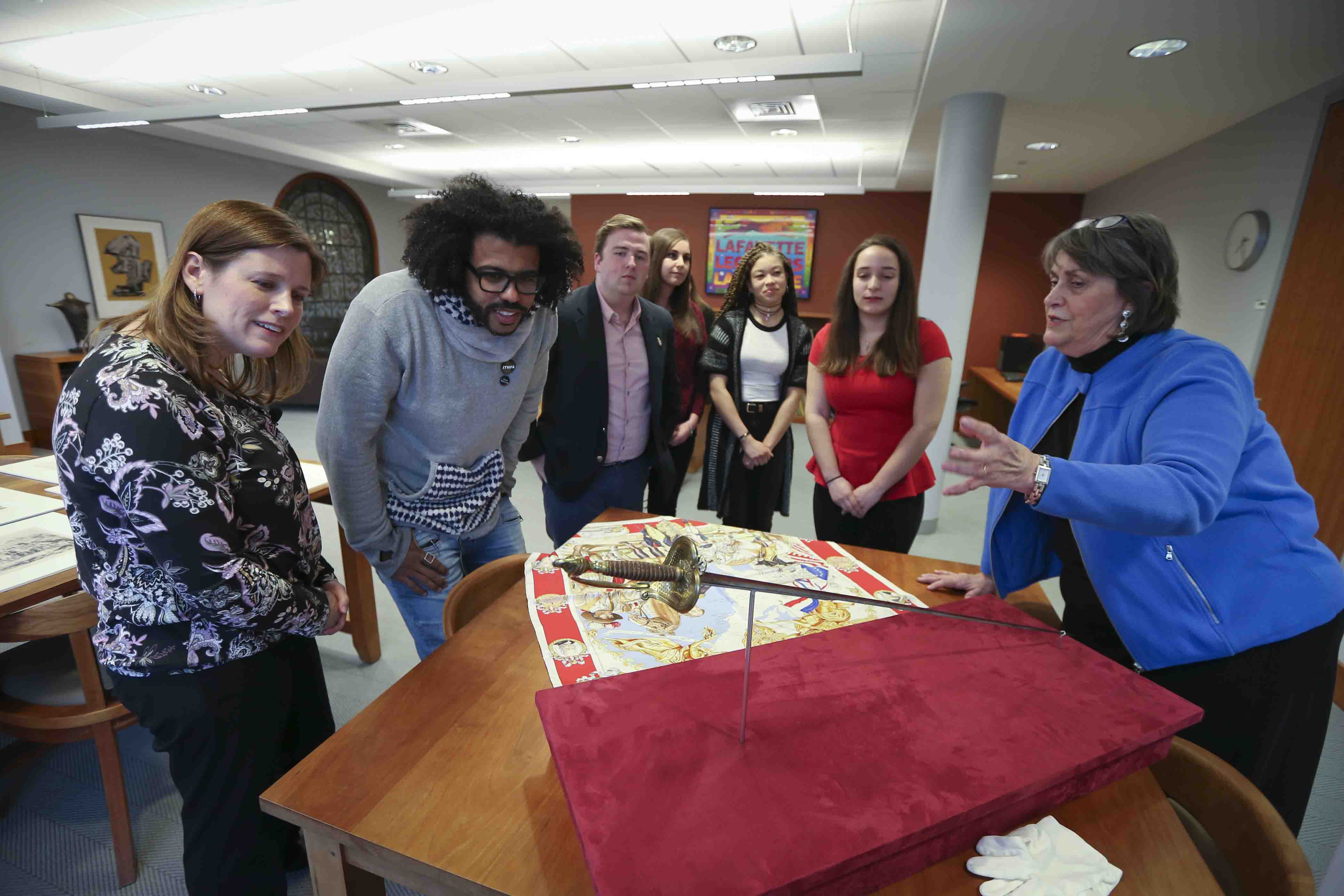 Appreciate the value of research.

Diggs played Lafayette in act one of Hamilton and Thomas Jefferson in act two. In order to give each character the right demeanor and voice, he read a lot of source material in preparation for the roles. And so, as part of his visit to campus, Diggs was excited to have the chance to tour the Special Collections and College Archives. Director of Special Collections Diane Shaw put several of the College’s treasures on display for Diggs and shared the backstory of each, including Lafayette’s sword, the vest he wore during his farewell tour, and several letters Lafayette penned to George Washington. In one of the letters, which Shaw described as her favorite, Lafayette proposed the two men join together in an experiment to free slaves, expressing “if it be a wild scheme, I had rather be mad that way, than to be thought wise on the other tack.” Diggs thanked Shaw for an “amazing, beautiful experience.”

Give props where it’s due.

Diggs complemented President Alison Byerly for her lip-sync rendition of “Guns and Ships,” the fast-paced number he famously performs as Lafayette. In the song, Diggs averages 6.3 words a second—a feat Byerly said was not lost on her. Byerly’s performance, which was part of the President’s Challenge lip-sync contest, impressed Diggs, who had watched her video at the urging of students: “I really enjoyed it,” Diggs told Byerly. “I think you did a really great job.”

Students enjoyed their interaction. Smiles and giggles spread when Byerly asked if she could get a photo with Diggs. “I guess they thought it was funny for me to be in the position of a typical fan asking for a photo,” she said.

Missed Diggs in Hamilton and on campus?

Well, lucky for you, Diggs now seems to be everywhere. Since leaving Broadway, Diggs has appeared in the film Wonder and television shows Black-ish, The Unbreakable Kimmy Schmidt, and The Get Down. In July, his film, Blindspotting, will be in theaters. As the co-writer, co-producer, and co-star of the film, Diggs said it’s the project he’s most proud of and quite a labor of love. He’s been working on it since 2008, predating his work in Hamilton. “The thing I enjoy most is creating my own work,” Diggs said. “I am in this moment now where I’m being asked to do a lot of things. That’s a luxury as an artist—to have the luxury of choice. I’m very fortunate.”