In 10 minutes, you can fold a load of laundry, do the dishes, or balance your checkbook.

And this weekend at Lafayette, you can take in a play exploring race relations, watch characters spar and transform themselves on stage, or split your sides at a brand-new comedy.

On Friday and Saturday, five Lafayette student directors and casts of Lafayette thespians will present the five winners of the Theater Department’s 10-Minute Play Contest in a fast-paced evening that changes course every 10 minutes. 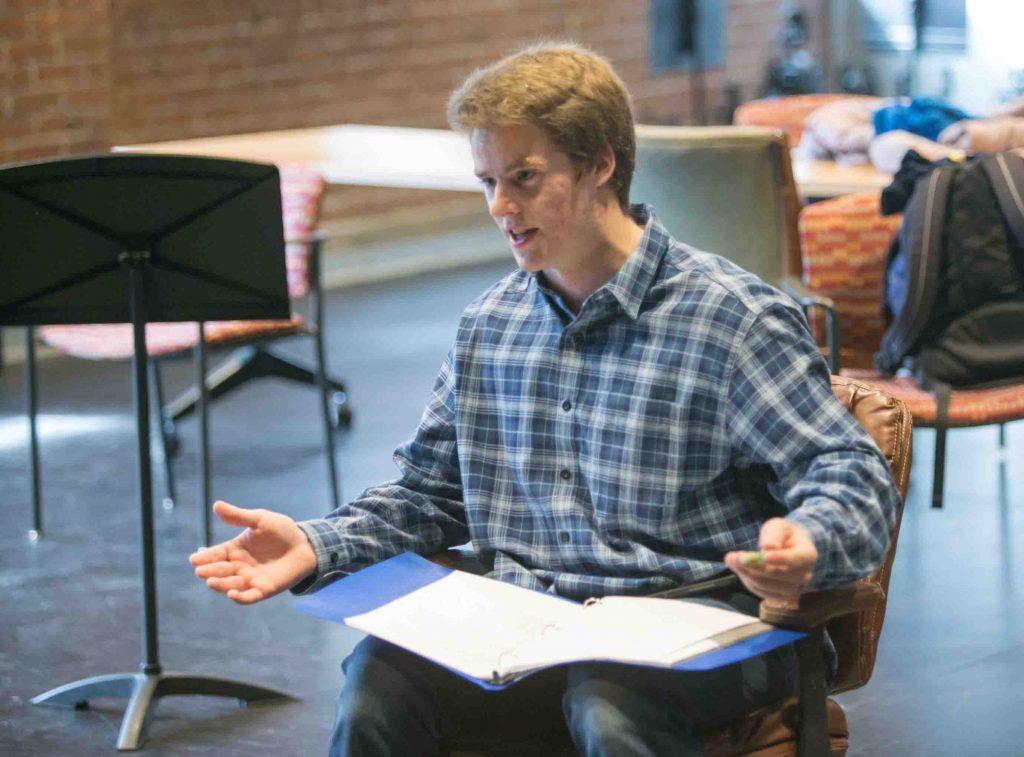 The College solicited short plays from around the country. Roughly 80 playwrights submitted entries. Readers from the faculty and professional theater selected the winners, and students picked their favorites to direct.

Each student director was given a budget of $50. Working with the writer and a cast of their own choosing, each director will present a play lasting 10 minutes.

Scenery changes take place between each play. Oftentimes, the selected actors must play multiple characters in multiple productions or switch from director to actor all over the course of about an hour and a half.

We sat down with each of the directors and asked them to tell us about their productions.

Matt Peters ’19
The play: Casting Call by Jonathan Arrington ’21 (the lone entry by a Lafayette student)
The cast: Charles Evans ’19, Brent Knox ’19, Henry Ficcadenti ’21
Why did you select this play?
“The play is about an African American actor who gets typecast as the gangster type in movies. He meets with an agent and a producer about a new film. And it’s another one of those kind of roles, and he just tells them that. He’s done doing these roles that depict African Americans in a bad light. It’s something that happens a lot. And I don’t think a large majority of students think about that, about black actors and what they have to go through.  … I just thought it was great to work with another student. We met and discussed it. He actually did some revisions for me and was really gracious with that.”

Brent Knox ’19
The play: Birdhouses by Sean Crawford
The cast: Mary Kate Arcuri ’19, Peters, Ficcadenti
Why did you pick this play?
“Three characters are in their 30s. There’s a couple who is married. The wife currently is going for her Ph.D; she’s taking online courses. Her husband is … well, he doesn’t seem to have a job at the current moment. They’re having a hard time in their relationship. He’s not very supportive of her. They’re having a yard sale. Doug, that’s the husband’s name, Jen is the wife. Doug has had this one box of VHS tapes ever since he was a little kid, and it has a lot of his memories. So she wants him to sell it, just get stuff out of the house. So this guy Aaron comes along to the yard sale, and he’s interested in buying this box. So there’s this whole big shenanigan that takes place where Doug doesn’t want to sell the box because of his memories. Jen comes out and says you need to sell this box, and Aaron, who is buying the box, in the end reveals to us … well, the concept just seemed fascinating to me, it just seemed like such an oddball thing to do.”

Ethan Simmons ’18
The play: Mamadou and Harry by Paul Kodiak of Bethlehem, Pa.
The cast: Xiaonan Chen ’19, Peters
Why did you pick this play?
“Mostly because it’s a small cast. Small-cast plays are easier; you only need so many people’s time and effort … because I know how much Lafayette students love to overwork themselves and have lots of extra things going on.  Harry is a white normal college student who is taking a foreign exchange student, Mamadou, on a drive. He’s teaching Mamadou how to drive a car before he takes his permit test. And hijinks ensue on the road. It is a comedy. It definitely has some racial commentary. Harry sounds a bit patriarchal when he’s talking to Mamadou … It seems like a play from 30 years ago. They’re two very distinct types that are very common on stage, and I think similar in a way, but it’s the exotic figure and the straight man is usually what we call them.” 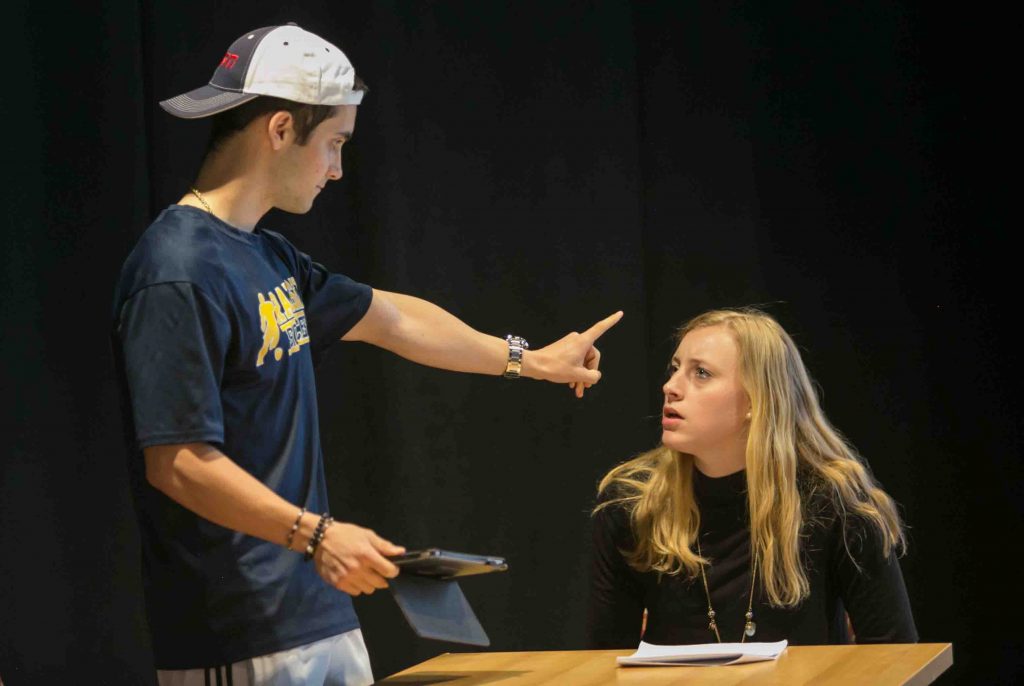 Tim Barry ’20
The play: Talking Points by Steven Hayet
The cast: Brian Long ’21, Maddy Proulx ’21, Adam Bramson ’20, Arcuri, Ian Miller ’20, Emma Krebs ’20
Why did you pick this play?
“It’s a comedy about a weird guy in his 20s who comes home to his family. He’s supposed to bring his girlfriend home, but it turns out his girlfriend dumped him. So he has this prepared speech about why his girlfriend isn’t there. The play opens up with him going through flash cards going through his speech. He’s kind of deadpan, so it’s pretty funny. He’s just a really weird dude. My play has the largest cast. I have six people in my cast. It’s the main character, the 21-year-old guy, his little sister, and his parents and his dad’s parents. So everybody has a pretty distinct character. All the characters have their funny moments. I thought it was really cleverly written, and it’s my kind of humor, I think, just the way the guy delivers the lines. When I was reading it, I was just visualizing how I would act it and now how I want to direct it.”

Jules Holzmann ’19
The play: Where The Fireworks Come From by Michael Pisaturo
The cast: Arrington, Ethan Miller ’21
Why did you pick this play?
“It’s about two friends who grew up in the same area right outside Boston, and they’re best friends. They were both drunk at a party one night, and something happened between them. It’s been a yearly tradition for them to go and watch the fireworks on the Fourth of July, but they don’t quite know where they’re coming from. But they always sit out in the same place and look forward to that every year. And then one of the friends brings it up, and the other’s very reluctant to talk about it. One says, ‘I love you,’ and they bicker about whether or not they are actually in love. They don’t want to ruin their friendship. One is going off to Stanford, and they’re going to both be very far apart, and they don’t want it to end on bad terms. It has comedic aspects, but it’s a drama. It packs a punch in a short 10 minutes that we do have, and I think there’s a lot to take away from it. I think the way the play is structured, there’s one major surprise moment right in the middle, and the rest is just watching that either resolve or seeing what happens.”

Admission: Free and open to the public, but tickets are required. Shuttle service is available from the main campus to 248 N. Third St. before and after each performance. Free parking is available on the Williams Arts Campus.