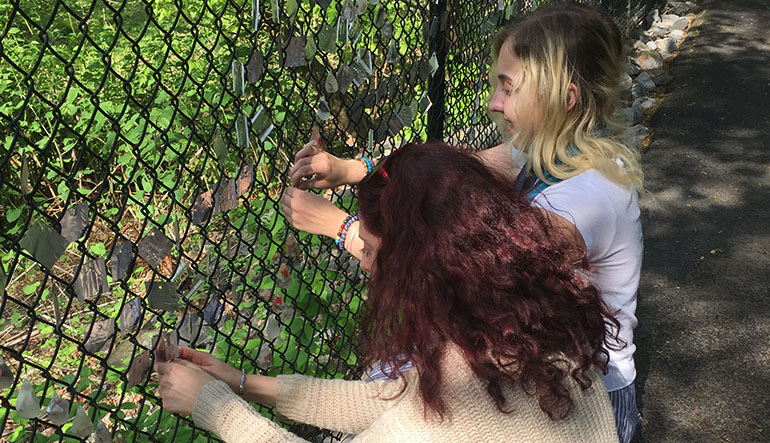 Silver tags and teardrops ripple on a chain-link fence near the center of Karl Stirner Arts Trail.

Each inch-wide drop is hiding something. Scraps of purple, red, and white swim up from their milky depths. The cracker-size tags, attached to each fence link with fishing leaders, are embossed with handwritten words like “the game plan,” “stricter gun policies,” and “peace.”

Look closely, and you might find a remedy for everything wrong with the world.

“We don’t intend to take them down,” says Jim Toia, Lafayette’s director of community-based teaching, who, along with a dozen or so students from local high schools, built the temporary art installation. They had permission and support of the trail’s organizers. “I imagine they’ll slowly disappear. They’ll be taken and dispersed.”

The students, part of a for-credit high school art program called the Lafayette Experience, come from Easton Area High School, Phillipsburg High School, and Belvidere High School. For weeks, they wandered among the English classes at their schools, to kindergarten rooms and other spots where kids assemble. They handed each student a square of foil-wrapped cardboard and asked them, “What does the world need now?”

“When we spoke to the teachers, we said, ‘Please don’t coach them,’” says Jason Horvath, an art teacher from Phillipsburg. “Whatever they think the world needs is their answer.”

“My Chemical Romance Reunion,” wrote one student. “Death Metal,” wrote another. “Grass,” “to be cleaned,” and “drag,” wrote others.

“We had some Donald Trump,” Horvath says. “We had a lot of Obama ones.”

The drops are made from resin in the Williams Visual Arts Building (WVAB) studios. Since 2002, students have been coming to the WVAB on North Third Street for the last period of their school days to work on art projects in exchange for course credit. Toia has been working with local kids long enough now that he bumps into former Lafayette Experiencers at the Easton Farmers’ Market and hears stories like, “I live in Boston. I’m a doctor. I have three kids.”

For the past couple of years, the Lafayette Experience has had the Karl Stirner Arts Trail, a Lafayette and publicly funded 2.4-mile track along Bushkill Creek, to use as a canvas and inspiration ground.

This year, the group was dismayed to find trash in their open-air studio. Visitors had junked parts of the art-lined walk.

“We found a lot of random stuff,” said Alyssa Luongo, a senior at Phillipsburg. Floating in the river and peppering the foliage were bottles, cans, a pillow, a bike seat, and a big pile of shoes, for some reason. The students gathered the trash and cut it into small pieces. They made teardrop-shape casts, then filled them with liquid resin and tiny pieces of garbage.

On May 14, they hung the final trash teardrops and tags to a short stretch of fence about 300 yards or so from the 13th Street entrance to the trail. Though somewhere between 2,500 and 3,000 tags and more than 500 drops in all have been installed, the effect is subtle. A utilitarian fence turned wishing well for the world, where garbage becomes jewelry.

“We did a test drive, and what happened?” Toia says to his gathered students.

“All the teardrops were taken,” one student replies. “Some of the tags.”

“Right,” Toia says. “So keep an eye out around Easton, and if you see someone with a big earring …”

“They literally took their own trash back,” Luongo says.