Students travel to Cuba to document the changing landscape of architecture and study the attributes of traditional, rural housing Twitter 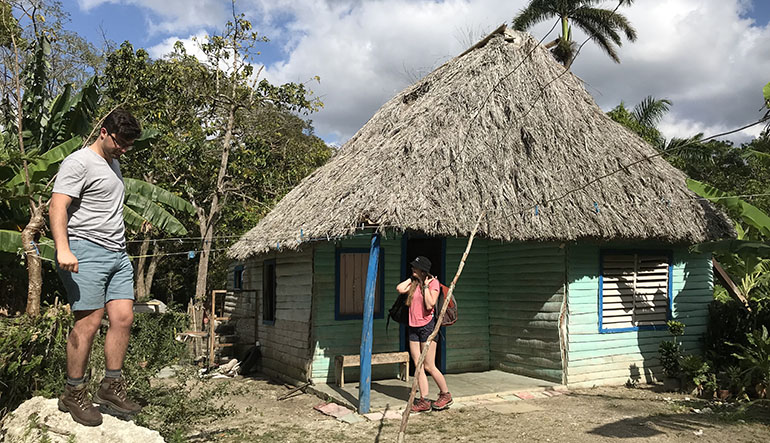 Students in Mary Wilford-Hunt’s Sustainable Solutions class traveled to Cuba this past semester to take a deep look at how traditional rural architecture has come to embody sustainable building strategies.

As nations lift trade restrictions, Cuba is experiencing a new wave of development and shifting toward a more modern style of construction of concrete and aesthetic appeal.

Concrete housing has become popular, but the trend is costing Cuba its traditional-style dwellings—affordable, charming, well-ventilated structures of thatched roofs, bamboo, and royal palm, referred to as vernacular architecture, that can withstand tropical weather better than modern construction. Many of these houses have design strategies that promote evaporative cooling and passive solar techniques.

Cuba was selected as the focus of this year’s EGRS 480.02 Sustainable Solutions, a project-based class, because of its connection to similar research conducted in Honduras a few years ago, and variables and controls surrounding the research.

“The controls are that it’s an island in the Caribbean with rising sea levels, warm and humid conditions, and tropical storms,” says Wilford-Hunt, senior associate director of corporate, foundation, and government relations. “But the variables are the embargo—materials from outside Cuba have not been available, especially since the demise of the Soviet Union.  That has changed things considerably.”

The project also was propelled by Lafayette’s growing interest in Cuba, she says, noting that faculty members traveled there a few years ago for extended reconnaissance, resulting in a number of classes that have benefited from a growing network of contacts on the island.

Over cups of strong Cuban coffee in conversations with their hospitable hosts, students got a firsthand look at evolving Cuban culture and produced a documentary (watch it here) and booklet on their experiences.

“Our function was to document their housing and style of architecture,” says Jacob Levy ’18 (mechanical engineering). “We were not trying to change anything or improve anything, just to understand the realities of residential construction in Cuba. There are lot of changes with styles of houses and people’s perception of housing with increasing severe weather conditions.”

Some Cubans now perceive that a concrete house is safer than their traditional wooden houses. But the wooden houses, which have some give in them against strong winds and ventilation gaps at the roofline between exterior walls to relieve pressure, stand up better to hurricanes than the new construction.

Justine Perrotti ’19 (geology) brought her expertise to the project and looked at how coral stone is used in traditional construction and how it performs compared to concrete in Cuban housing. “It was an interesting way to learn about different techniques and sustainable building materials,” she says.

“We’re not there to change anything or suggest anything, just to understand and to see how they do things,” says Alex Homsi ’19 (mechanical engineering). “Sometimes they’re not sure why they do things a certain way. But when you ask the homeowners, they just say ‘that’s the way we do it.’ ”

“Reporting this is important, especially now that new construction is being described as the Cancunization of Cuba,” he says.

“They are losing their traditional style of building, and it’s starting to look more like Miami,” Wilford-Hunt says. “People think concrete is better—more comfortable and storm resilient—but our study suggests otherwise. We suspect there’s a stigma associated with traditional forms of building.

“We asked how the concrete houses stood up in storms, and they reported that the roofs blew off,” she adds. “And then we would ask how the wood houses stood up, and they say ‘oh, it was fine.’ From our analytical engineering perspective, we’re not sure if that stigma or perception will be overcome.”

Over spring break, the students, Wilford-Hunt, and Luis Schettino, associate professor of psychology and neuroscience, visited rural areas in southern and western Cuba in search of traditional housing. They’d simply knock on some doors and start conversations.

“The people were so welcoming. We would show up and measure every inch and take video,” Levy says. “They made us coffee and tried to give us as much info as they could.”

“They were are unbelievably friendly and helpful,” Wilford-Hunt says. “Their first reaction was to smile and invite us in for coffee. It’s been fascinating to understand how these sustainable building techniques have evolved to such a high level generation after generation. They may seem like modest shelters, but we really grew to admire them.”

A group of 15 scholars worked with Prof. Kathleen Parrish and with local news source Lehighvalleylive.com to write and publish a series of articles that…