Traditional journalism typically goes something like this: Reporter or editor comes up with an idea for an article. Reporter selects sources to interview based on the preconceived story angle. Reporter writes the article. But students in Lafayette College’s Advanced Journalism course recently turned that age-old model on its head.

From the beginning of the spring 2022 semester through the first half of the summer, the group of 15 scholars worked hand-in-hand with their professor—Kathleen Parrish, visiting instructor of English—and with local news source Lehighvalleylive.com to write a series of articles that not only brought innovation to journalism, but also engaged the community. The series—which aimed to amplify the voice of the Lehigh Valley’s LGBTQ community and raise greater awareness of the issues affecting it—was recently published on Lehigh Valley Live’s website and in its affiliated print newspaper, The Express-Times.

“It’s exciting to be on this cutting edge of doing journalism in a new way—focusing on community and making meaning of people’s stories in a way that has impact,” Parrish says. “And it’s fulfilling for me, as their professor, that my students’ work is receiving this attention.” 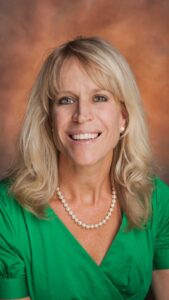 The project started last year, when Parrish became one of six educators in the country to receive a Journalism for Underheard Stories (JUST) grant from University of Wisconsin. The goal of the grant is to train journalism students to bring marginalized voices to the forefront, foster inclusive community conversations about inequities, and spark solutions to problems that disproportionately affect populations that are underrepresented by traditional media.

Parrish decided to focus her funding and project on addressing the social inequities faced by the LGBTQ community. She was inspired by the work of Mary Armstrong, Charles A. Dana Professor of Women’s, Gender, and Sexuality Studies, who led the creation of the Queer Archives Project at Lafayette—an initiative designed to tell the history of the College’s LGBTQ community through alumni oral histories and archives. “I thought this new project would be a great resource for students, and would build on the conversation and work that Mary Armstrong started,” Parrish says.

Another facet of the JUST grant was that students were to partner with a local media source, which would help them create and potentially publish their stories. So, Parrish reached out to Nick Falsone—managing producer at Lehighvalleylive.com—about the opportunity. Serendipitously, Falsone also was looking to do more reporting on Parrish’s chosen topic.

“As a local news organization, we haven’t historically done an adequate job covering the LGBTQ community,” Falsone says. “Our newsroom has been working to change that in recent years, and this project offered us an opportunity to expand on that work.”

Thus, the partnership—the first of its kind for both Lafayette and Lehigh Valley Live—was born.

In the classroom, Parrish and Falsone worked closely with the students throughout the spring to guide them through the article-writing process. They facilitated and participated in discussions, helped students develop their craft as journalists, and provided editorial guidance as students collected information for their articles through interviews and research.

“From day one, Prof. Parrish referred to us as journalists, not students,” says Sabrina Sicilia ’22, who earned a bachelor’s degree in English and Chinese in the spring. “She is quite passionate about her craft, and that manifested itself in our weekly classes. She pushed us to take risks with our journalistic investigational and writing processes, which I loved and appreciated. It worked out in our favor when pursuing the ideas for our pieces.”

During the course, students listened to audio recordings from the Queer Archives Project and heard guest lectures from prominent figures in the local LGBTQ community about challenges they faced. They also analyzed various hot-button topics—such as the recently passed “don’t say gay” law, and laws limiting the participation of transgender athletes in sports—and how they were covered by the media.

With the help of another project partner, national nonprofit Cortico and its Local Voices Network, students conducted town hall meetings with LGBTQ community members at Lafayette and in the Lehigh Valley, during which various LGBTQ-related topics and issues were discussed. “The students got people talking and allowed them to share their stories and perspectives,” Parrish says. “It was real, the stories were authentic and from the heart, and people were really vulnerable in sharing them.” Cortico created an audio recording and a transcript of the open and powerful conversations, which students then used to generate and fine-tune their article ideas for the Lehigh Valley Live project.

“It wasn’t somebody in a newsroom saying, ‘Hey, it’s Pride Month; we should write a story about it,’” Parrish continues. “They wrote about topics that evolved from the people who are directly affected by these issues, rather than writing with a preconceived idea of what the story should be. We hope that translates in their stories, builds empathy and understanding for these community members, and helps rally the community to come up with solutions.”

Once they narrowed down their focus, the students were then responsible for finding and interviewing sources in the community that could speak to their individual topics. The end result was an authentic, poignant series of student-written pieces covering a rich spectrum of LGBTQ issues in the Lehigh Valley that were published this summer on Lehighvalleylive.com and on the front page of The Express-Times.

Ariel Markowski ’23, for example, told the moving story of an Easton transgender woman’s lifelong search for acceptance and self-love, and explored solutions to the bullying of LGBTQ youth in the Lehigh Valley. Sicilia penned a piece about how the closure of the Lehigh Valley’s gay bars took away more from the queer community than just a physical space to socialize. The writing of Saide Singh ’22 illustrated the importance of local libraries as not only educational resources, but also safe, welcoming spaces for LGBTQ community members. Gabe Dewey ’22 wrote a retrospective article about the significance the Lehigh Valley’s now-shuttered Stonewall nightclub has held for LGBTQ locals throughout the years.

“The most important thing I was able to take away from participating in this project—and interviewing the wonderful sources for my piece—is that Lehigh Valley’s LGBTQ community is wonderfully creative and resilient,” Sicilia says. “Despite the mass closures of gay bars throughout the Lehigh Valley over the past decade, the gay social scene continues to prevail with events like the Easton Tea Dance, Easton Pride Party, and more. Bringing attention to these events will hopefully bring more members of the Valley’s queer community together despite there being a current lack of queer social brick-and-mortar establishments. I also hope my article calls attention to the remaining issue of the lack of gay bars throughout Lehigh Valley. One of my sources, Brian Wendt, said it best: ‘Every town should have a safe place where people don’t have to compromise themselves or conform to be accepted.’ Hopefully these establishments return to the Lehigh Valley in the future.”

Students whose stories were not published by Lehigh Valley Live were archived in Lafayette’s Queer Archives Project as resource materials for additional scholarship.

Parrish hopes the students’ work will inspire those living in the Lehigh Valley and beyond to show greater solidarity with one another and more respect for one another’s individuality. “That’s the power of journalism, to create community. These are our neighbors, and there’s commonality regardless of difference.”

Falsone adds that, based on the publication’s analytics, the stories were widely read. “We also received some positive feedback from readers,” he says.

The overall experience was transformative for her students as well, Parrish continues: “As a liberal arts college, Lafayette prides itself on helping students think critically. The students got past the anxiety of walking up to a stranger and talking to them, and they were empowered to talk about sensitive topics. They also saw the evolution of a news story—tracking down sources, doing research, writing, editing, rewriting—and how it’s not something that happens overnight. My hope is they have a greater appreciation for journalism and gained an understanding of how it works in a way that can’t be taught in the classroom.”

For many students, this was their first time seeing their journalistic writing in print. “Writing has always been a lifelong love of mine, and to have this piece as part of my story as a writer is quite meaningful to me,” Sicilia says. “Working with the Lehigh Valley Live staff was one of the most impactful learning experiences I’ve had thus far and is an opportunity I am grateful to have had as an undergraduate.”

Falsone was pleasantly surprised by the students’ high level of commitment to the project, and says working with them served as a learning opportunity for him too: “I can’t overstate how much I enjoyed working with the students. I have some experience working with college students, but nothing to this degree. I found it fulfilling to see them develop to a point where they could deliver quality, important journalism to our community. We spoke very candidly about the role of journalism and the areas where traditional media outlets like Lehighvalleylive.com have come up short. Hearing the perspectives of young, engaged people on these matters is going to help me become a better journalist.”