Chenyu Zhang’s passion for scientific research started with a bag of potato chips.

A 15-year-old high school student in Singapore at the time, Zhang ’19 began designing her own experiments as part of a scientific project to see if the “lightly salted” label on potato-chip bags was accurate.

“I was crunching up potato chips and soaking them in water, then testing them with silver nitrate,” says Zhang, who discovered the lightly salted version actually contained more sodium than regular chips. “That was the kick-start of exposing me to research and asking questions about everyday life.”

Now a biology major and economics minor, Zhang’s zeal for discovery has led her to internships at the Institute of Cellular and Molecular Biology in Singapore, National Institutes of Health in Bethesda, Md., and at Lafayette, where she is studying early immune response to primary tumors in mice with Robert Kurt, Kreider Professor and head of biology.

In May 2017, she presented her research at the American Association of Immunologists conference in Washington, D.C.

“It’s very rewarding,” she says of her work, as the results will enable a deeper understanding of the early immune response to breast cancer. 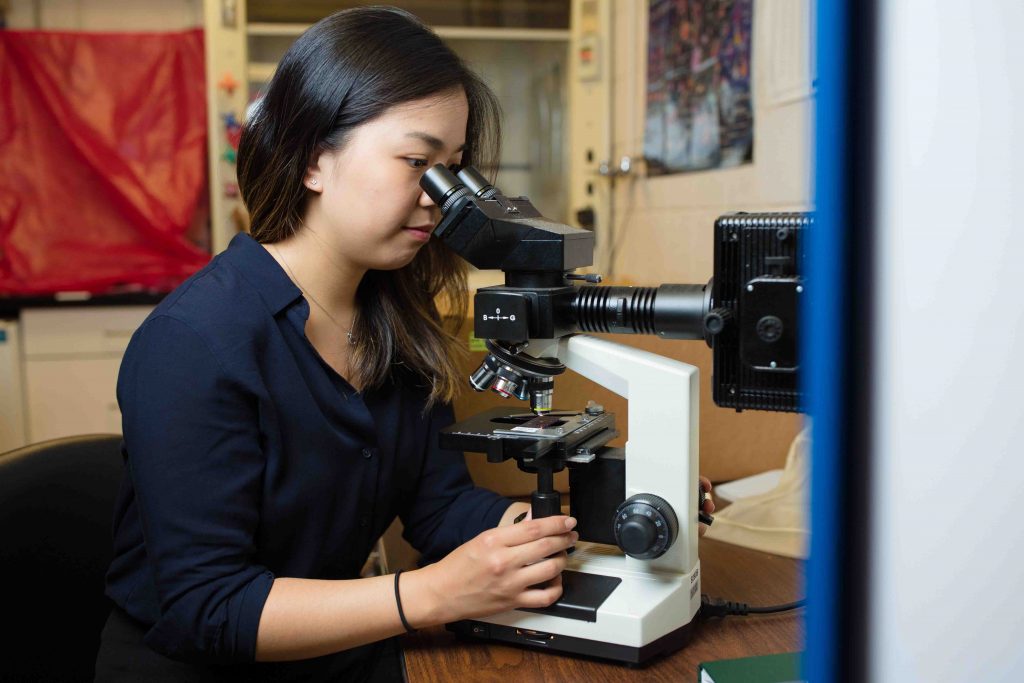 In March, she was awarded a Goldwater Scholarship, the premier undergraduate award in mathematics, natural sciences, and engineering. Named in honor of longtime Arizona Sen. Barry Goldwater, the scholarships provide up to $7,500 for college sophomores and juniors who intend to pursue careers in those fields.

The selection process is extremely competitive, and Zhang was one of 211 recipients from a national field of 1,280 applicants to receive a scholarship.  Jessica Ackendorf ’19 also was awarded a Goldwater, and Andrea Killian ’19 was named an honorable mention.

Zhang, who found out she was a winner while in Rome over Easter break, plans to apply to several Ph.D. programs that have a strong focus on stem cells, immunology, and cancer research. She was mentored in her application by Julia Goldberg, associate dean of advising and co-curricular programs.

Zhang spent spring semester and summer studying at Oxford University, where she is taking classes in biochemistry and biomedical sciences. She also worked with a lab in the Weatherall Institute of Molecular Medicine at Oxford, studying antigen-specific T cells isolated from influenza and cancer patients.

When Zhang returns in the fall to Lafayette, she plans to continue research on the early innate immune response with Kurt, whom she met her first semester through his yearlong SEA-PHAGES (Science Education Alliance–Phage Hunters Advancing Genomics and Evolutionary Science) lab. Phages are viruses that infect bacteria, and students searched for new ones in soil samples around campus.

Zhang successfully isolated and characterized a phage she called Tinybot, which was added as a novel entry in the National Centre for Biotechnology Information database. From fall 2016 to spring 2017, she served as teaching assistant for the SEA-PHAGES lab.

“These experiences have allowed me to share my experiences and inspire other students in many ways,” she says.

Research may be Zhang’s focus, but she’s also involved in the community, volunteering at the STEM program at Third Street Alliance and Kids in the Community, an after-school program for Paxinosa Elementary School students.  She also serves as a writing associate and career services ambassador, in addition to being an EXCEL Scholar.

The Goldwater Scholarship is one of many programs administered through the Office of Fellowships by Dean Goldberg.