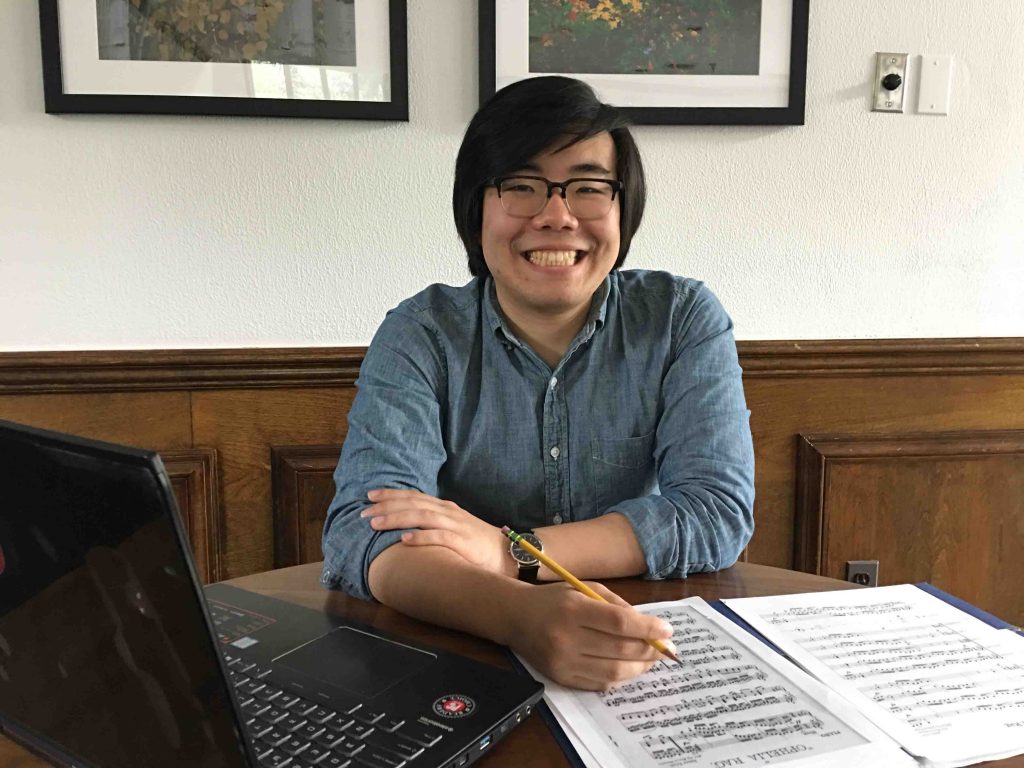 There’s a certain nostalgic purity about ragtime, musical qualities that inspired Josh Kwak ’18 to complete some posthumous business on behalf of one of America’s greatest ragtime composers.

While taking a class on early jazz with Anthony Cummings, professor of music, Kwak discovered ragtime’s influence on jazz and decided to focus on the connection for his final paper.

“At the end of that, I was in more discussions with Professor Cummings, and he suggested to me that I could continue with the project even deeper and look specifically at the Red Back Book, which is this collection of traditional ragtime music that’s been orchestrated and highly regarded among jazz scholars,” Kwak says.

Published in 1912-15 by John Stark, a champion of ragtime, and one of its most well-known composers, Scott Joplin, the Red Back Book went out of print and did not surface again until Gunther Schuller’s ragtime revival of the 1970s and the popularity of the soundtrack to the motion picture The Sting.

Rags by Joplin and other composers were originally composed for piano, but audiences during the heyday of the genre in the early 20th century would more likely hear them played by small ensembles of flute, clarinet, cornet, trombone, string quintet, and percussion. Stark’s Red Back Book provided a published resource of the stock arrangements, with a full score.

Kwak turned to the music of James Scott, a contemporary of Joplin and son of former slaves, and completed the orchestration of his “Ophelia Rag” and “Frog Legs Rag.” “My project looked at a few of the back ones he didn’t get to and give full treatment to them,” he says.

“I did some minor edits, pitch corrections, and added dynamic suggestions,” he says, adding that while Joplin’s music is more emotionally driven, Scott’s is more virtuosic. “Scott was much more of an active pianist and did accompaniments for theaters and silent movies. His daily life was in the piano, and his work reflects more of a focus of being musically refined.”

During the course of his discovery, Kwak, a violinist who graduated with a major in music, became fascinated with how ragtime, popular for only about 30 years, gave rise to jazz by the end of World War I.

“They are both in this continuum of music that was developed as a result of African influences, mixed with European traditions, and you have a bunch of other sub genres that came along too,” he says. “Ragtime has a controlled syncopation and a hidden depth—you associate it with happiness and an era of nationalistic fervor, a happier optimistic time. It’s easy to see how it nurtured jazz.”

“Josh did some exceptional work on ragtime, one of the greatest and most important American musical traditions,” Cummings says, adding that the orchestrated versions of rags became fixtures of popular band music performed in the United States around 1900 and were vital antecedents to jazz.

“It’s original, scholarly work, which may be publishable,” he says. “He went back to the original sources and interpreted them successfully—not an easy matter— and encoded them in expert musical notation.”

Cummings encourages listeners to experience ragtime. “If you even listen for a few seconds, you’ll hear just how delightful and enjoyable this music is,” he says.