On Wednesday, Lafayette will join the wide range of colleges, universities, and museums to screen a landmark film about the worldwide destruction of cultural memories. 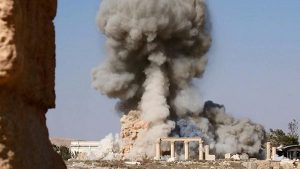 Destruction of Memory, a film by Australian-born director Tim Slade, will be screened 7 p.m. at Landis Cinema in Buck Hall. Based upon a book by Robert Bevan, it has been shown worldwide to critical acclaim and won numerous accolades.

Slade will be on hand to present the film.

“This award-winning documentary investigates why the destruction of historic monuments across the globe matters to us all,” says Diane Ahl, Rothkopf Professor of Art History. “From the bombing of ancient temples, mosques, and statues in some of the oldest civilizations in the world to the attack on the World Trade Center in New York, the obliteration of these structures are brutal acts of political, religious, and moral genocide annihilating our shared human culture. They deprive us of centuries of history and eradicate local, ethnic, and human identity. Destruction of Memory investigates this devastation and proposes what we can do going forward to prevent its recurrence.” 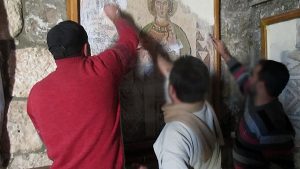 Slade answered a few questions about Destruction of Memory.

What drew you to this project? Why personally did you make this film?

When I read Robert Bevan’s book, I was immediately struck by the fact that, despite my relatively decent knowledge of history, this was an issue that I had never really thought about. Partly that is to do with these acts often seeming like collateral damage, but primarily, I think, the focus on the impact of war, conflict, and genocidal acts on human beings and their physical bodies, rather than on their identity. Taking both those things together, Bevan’s book demonstrated, is vital.

What’s been the most egregious example of this cultural destruction that you encountered while making this film?

It’s difficult to say what the most egregious example is, as they are all terrible acts, but I would say that attacks on libraries, such as the National and University Library in Sarajevo, strike me as particularly insidious, because knowledge, evidence of human creativity and community, and identity on collective and individual levels are being marked for eradication. This is why duplicates and digital copies are so important.

What do you hope people at institutions like Lafayette can take from this film? What do you think it will accomplish?

What has struck me as I’ve screened the film and spoken to audiences is that academics and students at universities are really key to the future of more effective approaches to the issue and its visibility. Governments, international organizations and law courts must monitor and remedy, but change really comes from educating new generations, whether they be students of law, art history, political science, architecture, religion, history. I hope it will inspire students at individual and at class levels to think more about the issues within the context of the USA and globally.