Play on Lafayette stage examines what happens when we forget Twitter 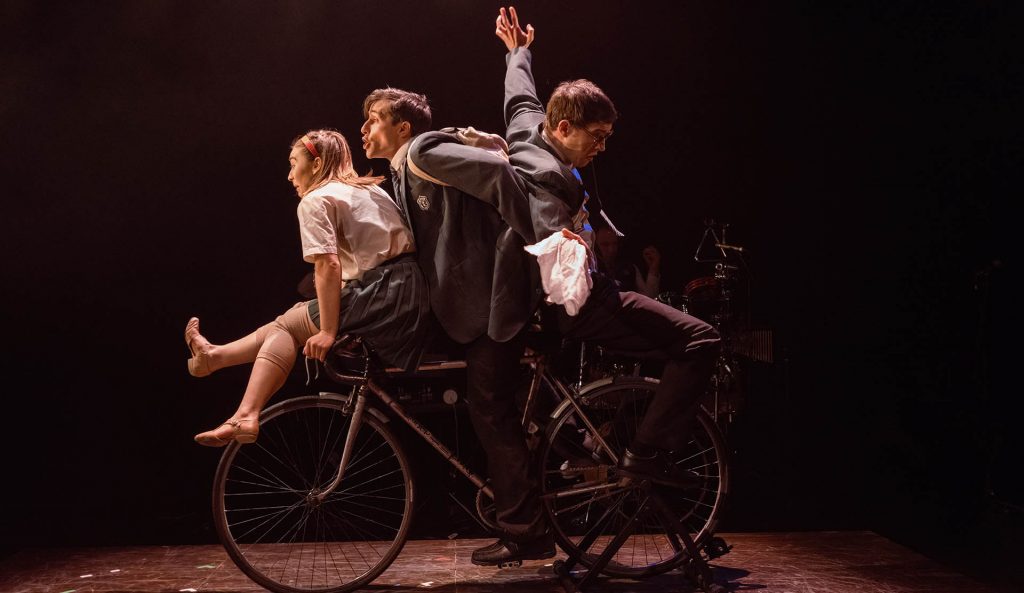 What about the time you noticed no one was helping, and you were thrilled to feel your legs pumping and your body balancing on two wheels on your first solo bicycle ride?

Or the time you hurt so badly you felt you’d never stop crying?

Chances are, you can access these moments anytime. Scientists can track how memories present themselves from their various mental jars and how your mind uses them. But have you ever stopped to consider—are these experiences your identity?

Are you your memories?

When Guillaume Pigé, the artistic director of London-based Theatre Re, and his team first set out with their production The Nature of Forgetting, they wanted to answer the question, What is eternal? The result was a unique performance that seeks to discover what’s left when memories disappear.

The play was featured at the Edinburgh Festival Fringe. Performed by a small cast almost entirely without dialogue, the story focuses on a middle-age character named Tom, who is in the early stages of dementia. As the audience watches, objects, gestures, and sounds unlock his memories.

Pigé and his team conducted dozens of interviews and collaborated with a neuroscientist to answer the philosophical question with the show that was presented Oct. 26 at Lafayette by Williams Center for the Arts Performance Series.

“I didn’t want to fall into the patronizing side of things or be sentimental about it,” Pigé says. “So we approached it from what actually happens in the brain when we forget.”

How does The Nature of Forgetting show audiences what happens when you forget?

In the play, the audience sees on the stage a second stage. That, Pigé says, represents hippocampus, the portion of the brain where memories are constructed.

Reynolds likens the hippocampus to a card catalog in a library—it fields requests for memories and guides the brain to the place where memories are stored.

On The Nature of Forgetting’s second stage are a number of objects, which lead the central character to recall portions of his life. As the audience watches, memories are constructed.

When the hippocampus is damaged, such as in a traumatic brain injury or early stages of Alzheimer’s disease, a person’s ability to access memories dissolves.

As memories fade, pieces go missing. The same phenomenon happens on the stage.

Is the reverse possible? Can you have too much access to memory?

Yes. There actually are people who remember too much, who can’t forget. “It’s very debilitating,” Talarico says.

So thankfully, Talarico says, “We forget a lot.” We’ll forget details like exact portions of conversations, or even much of what we might learn to pass an exam after we put our pencils down. We have a tendency to remember places relatively well, long after details that happened within them are faded.

However, once you learn something, it’s still engrained on some level. So if you once were a whiz at long division and suddenly you find yourself stumped, don’t worry. It’ll be easier to pick up again.

What does age have to do with it?

Pigé says part of his research involved examining the BBC radio show Desert Island Discs, where listeners are asked: If you were stranded on a desert island, what music would you bring with you?

“Strangely enough, all the songs picked by people who were from 60 to 90 years old were more often than not [music that was produced when the person picking was] between 7 years old and 30, 33 years old.”

Those early memories are more deeply protected, Reynolds says. For dementia patients, the more current the event, the more likely it will be forgotten.

In the play, not many remembered events happen to the central character after age 32.

What was the most surprising thing Pigé found in his research?

“For me, it was the fact that sometimes to forget can mean to remember better,” he says.

As someone begins to lose memories, suddenly events that happened decades ago come into vivid focus. For example, a World War II veteran might suddenly recall the events of the war with deeper clarity. That first kiss might suddenly pop with hues long forgotten, as the memory becomes less clouded by more recent thoughts.

So are we our memories?

“Yes, we are this cumulative totality of our prior experience,” Reynolds says. There’s evidence that our memories condition us even on a subconscious level to deal with most events in the present.

That said, Talarico says, there’s plenty of evidence to the contrary. Family and friends of people suffering from memory loss often say the person they love is still there when the memories aren’t.

“You listen to stories where people say Henry is still Henry, Peter is still Peter, Suzie is still Suzie,” she says. “There’s still the same kind of personality.”

“Memory is an odd thing,” she adds.

Categorized in: Aging Studies, Featured News, Neuroscience, News and Features
Tagged with: The Arts, Williams Center for the Arts