Joe Biondo is now teaching architecture in Williams Visual Arts Building, surrounded every day by walls studded with angular patterns of repurposed clinker bricks, reminiscent of ancient Persian brickwork. It is all part of his vision of a space that would inspire creative exploration among students.

True to his vision, the building itself has become a focal point at the base of College Hill. Since it opened in 2001, the number of art majors has more than doubled.

The building received a Silver Medal from the Pennsylvania chapter of American Institute of Architects, the chapter’s highest honor for a project. Kerns describes all of Biondo’s design concepts as “pioneering visions.” 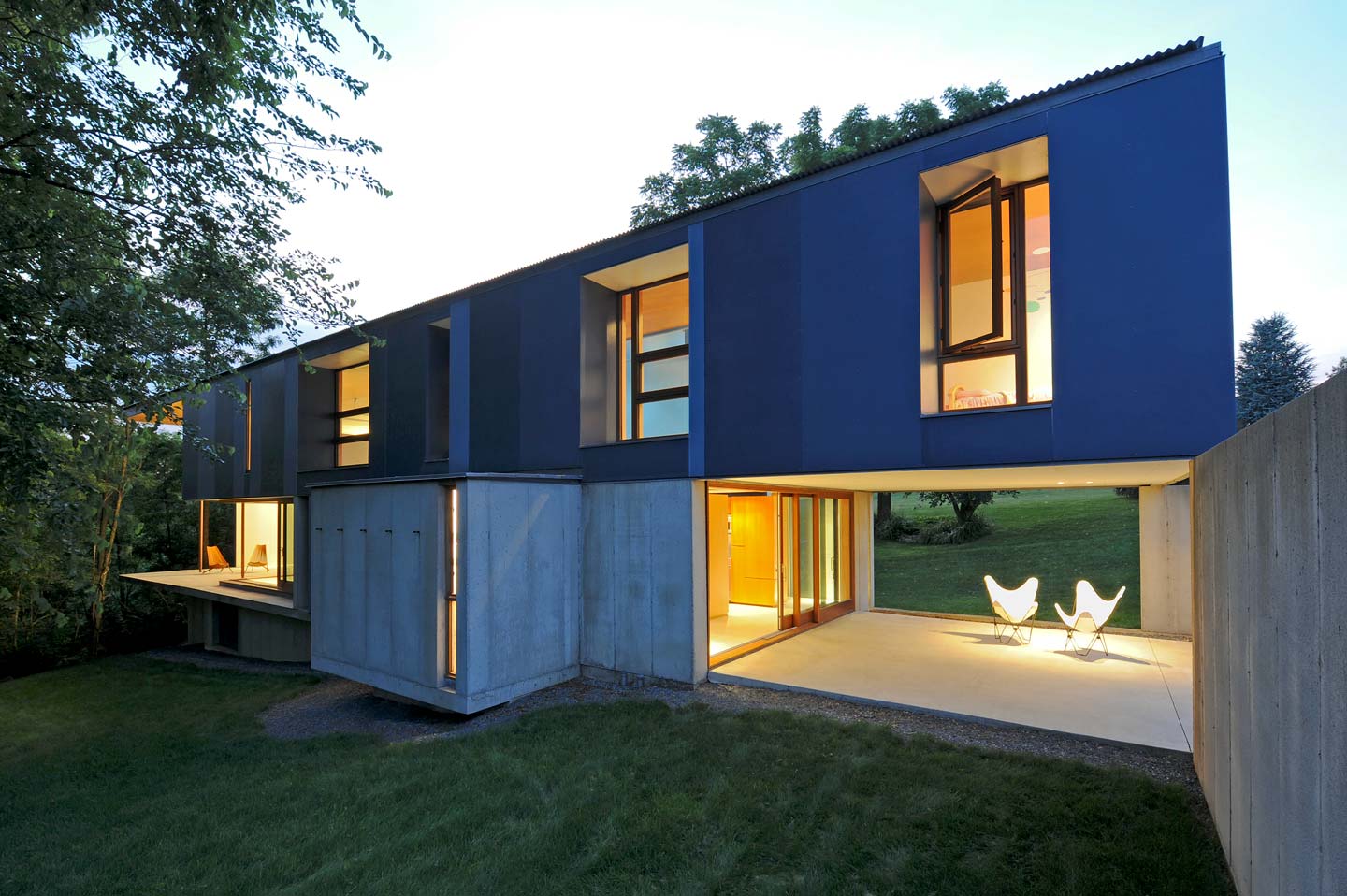 “What I admire about Joe is his empathetic approach to space, his respect of materials,” Kerns says.

Biondo says it’s an unbelievable feeling, “the notion of teaching in a building you designed, a building that’s a model for teaching architecture and art. It’s living the dream to do that.”

The architect, a principal at Spillman Farmer Architects in Bethlehem, whose work is influenced by his family’s background in the garment and construction industries, recently published a book about another material-based project that remains close to his heart.

House Equanimity chronicles the foresight, design, and construction of Biondo’s own home in Allen Township. Made of concrete, a homage to the birthplace of American Portland Cement in western Northampton County, the home stands in stark contrast among more traditional single-family homes in the surrounding subdivision.

Started in 2003, the home took three years to build, a schedule almost unheard of in a fast-paced consumer society where homes are framed and erected with particle board seemingly overnight.

“I purposely made this a slow process so I could ruminate over every phase of the design and treat it as a work in progress,” Biondo says. “A lot of my work takes ordinary materials and takes them to extraordinary new levels.”

Not far from the Saylor kilns that produced Portland Cement, Biondo’s home sits on an acre lot, nestled into rugged terrain with minimal disturbance to the environment.

“We found a low-road lot on which to build,” he says. “I’m interested in castaway lots that a builder would not touch. I’m attracted to challenging sites to make something special of them.”

He is also fascinated by how materials age and respond to the environment. When the concrete was poured, rain washed onto the forms, creating unintentional patterns on the surface. “Natural elements create their own artwork,” says Biondo, whose project inspired curiosity from his neighbors.

“To us, it’s just a normal house,” he says. “Growing up, the question from my kids wasn’t, ‘Why is this house different?’ It was, ‘Why is everybody’s house the same?’ ” 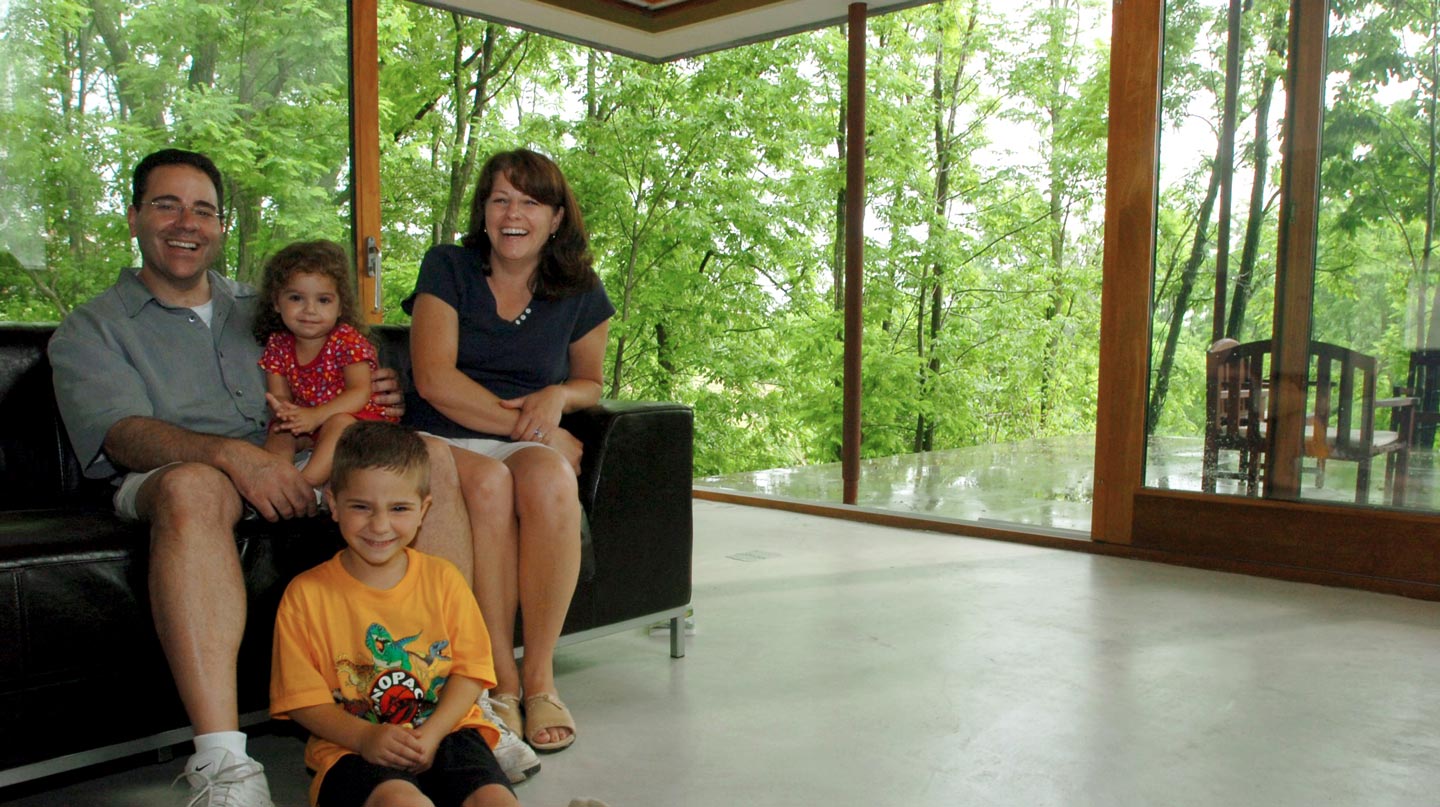 The warmth of the wood accents blends with the concrete panels. Biondo kept the space purposefully unarticulated and unadorned, with ties kept visible as a reminder of how the home was formed.

Even the driveway creates a sensory surprise.

Blue stone aggregate, which is used for drainage, sends off a gravelly crunch as rubber tires move over it. “It’s all part of the experience to heighten your sensibilities on your journey and arriving at a special place,” he says.

“It’s the design sensibility that we associate with Joe’s career,” Kerns says. “It’s a masterpiece because of the use of open space.”

Biondo imparts the importance of good design to his students.

“In my teaching, I’m not necessarily trying to raise architects but to teach and be aware of what good design is all about,” he says. “My mission is to make active shapers. Many of these students will be on school boards and planning commissions in our communities. I want them to engage in that dialogue of design. They will have the tools to be confident and have the vocabulary to talk about the importance of good design.”

“We’re all affected by bad design; we’re not always aware of what good design is,” Biondo says.