Students sit at workstations in the Pardee basement computer lab, using lassos and stamps in Photoshop to remove people and objects from historical images.

Gordon Parks’ famous 1942 photo of an African American cleaning women who stands in front of an American flag, flanked by a broom and mop, now is without the cleaning tools. Or in other instances, her. 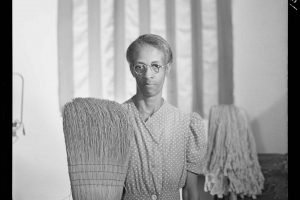 The workshop was supported by the Laros Foundation, organized by Ida Sinkevic, Rothkopf Chair and professor of art, and led by a master of image manipulation, Serbian artist Cedomir Vasic.

The workshop corresponded with a Vasic exhibition at the Williams Center Gallery called Mutable Images, Shifting Vision. The show features famous historical paintings like Coronation of Napoleon by Jacques-Louis David, Declaration of Independence by John Trumbull, and Washington Crossing the Delaware by Emanuel Leutze.

Vasic intervenes in those images, stripping out layers and removing people, then filling in with reconstructed furniture, windows, and rugs. He next combines the original with his reconstructed image by making a lenticular print.

Lenticular images allow a viewer to see both images at the same time; from the left is one image while from the right is another.

The image comes to life as people in the image are seen and then fade into nothingness. The lenticular process feels appropriate to the idea of shifting vision.

“The images have an eerie quality,” says Sinkevic. “We expect what we know to be in the image, but it is gone, raising questions of beauty, loss, technology, and history … all changed in the click of a button.”

For Sinkevic, the work blends multiple styles. “There are modern elements with the reconstruction technology, the 1960s theory of vision—how the viewer completes the art—and 1970s installation art,” says Sinkevic.

Students in the workshop make decisions on what to remove and what to recreate, a commentary on history and politics.

“What we see in the world can change based on the conditions—how we are feeling, the season, and the cultural circumstances,” says Vasic. “With this artistic approach, we can transfer one work of art to another time, another state, and another meaning.”

Vasic understands this work on a personal level. “In 1991, the country I loved disappeared when the war started,” he says. “Today computer cleansing can be more dangerous, wiping out memory. If you lose memory, you become something else or what someone else wants you to be. If you destroy history, you can destroy a people completely.”

In the workshop, Vasic shows images of Roman sculptures where the heads of emperors change while the bodies remain the same. He shows Buddha statues in Bamiyan, Afghanistan, and then empty niches after the carvings were destroyed. Finally, there is a series of images of Joseph Stalin where his comrades slowly are removed as they fell out of favor until the dictator stands alone.

He then shows students this process of stripping the famous paintings. Photography instructor Greta Bergstresser steps in, showing students how to replicate Vasic’s approach in Photoshop.

Cleansing is what Vasic calls it.

Students create new works and new meaning by removing elements they deem undesirable. What once was there is gone.

Sinkevic then leads a discussion about the student-created works. They discuss how to interpret the art, process of removal, time to create, and how cleansing changes meaning. Deeply.