As a first-year student, Henry arrived at Lafayette with plans to pursue engineering. An opening in her spring semester schedule enabled her to add another class. She decided to take an entry-level geology course with Dru Germanoski, Van Artsdalen Professor of Geology and Geosciences, who also co-chairs the environmental science and studies programs.

The class—actually, a very particular lecture delivered in that class—changed Henry’s course in life.

“I remember sitting in class when Dr. Germanoski started talking about climate change—the science of it,” Henry says. “I had heard about climate change before, of course. But I had never learned about it in a formal way—about the evidence and how scientists can make predictions about the future climate from studying the past. It was really impactful.”

So much so that it influenced Henry to major in geology and environmental geosciences.

“I love it,” she says. “It’s the best decision I ever made. The community in this program is amazing. The profs are so close to the students. I feel welcome here. It’s home.” 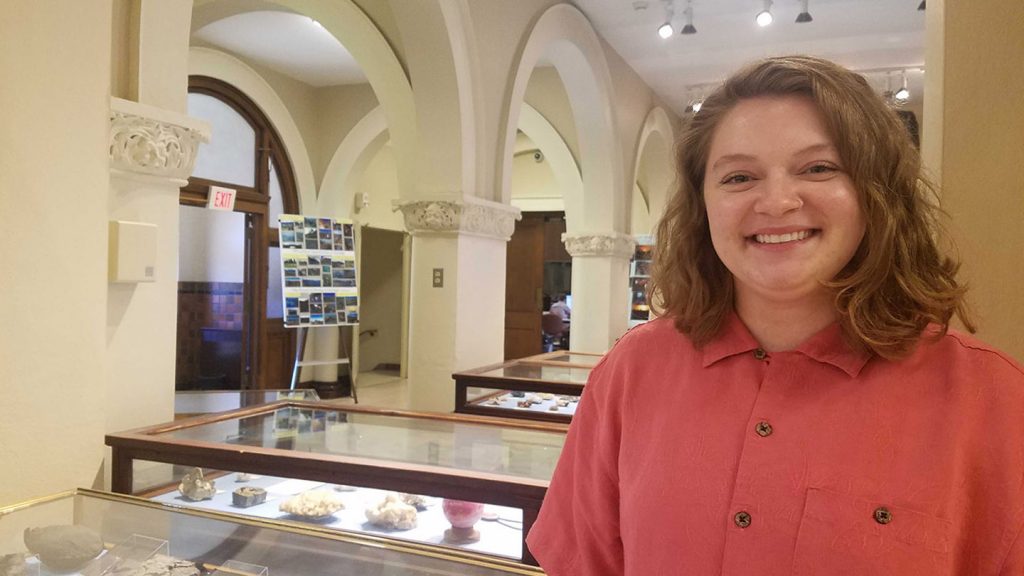 Henry has accumulated many hours in her home-away-from home, Van Wickle Hall—especially over the past years, during which time she has been working on a thesis project with Kira Lawrence, professor and chair of geology and environmental geosciences.

Henry has been collaborating with Lawrence, a climate scientist who studies mud that has been deposited on the ocean floor over the course of a million years. Using ocean sediment cores and the remnants of ocean organisms preserved in them, Lawrence produces records of  past changes in ocean surface temperatures. She uses lessons learned from studying the past to contextualize modern and future climate change.

Henry had the opportunity to present her findings this spring at Northeast Section Meeting of the Geologic Society of America (GSA) in Portland, Maine. (Read about all the geology students who presented at GSA meetings this spring.) 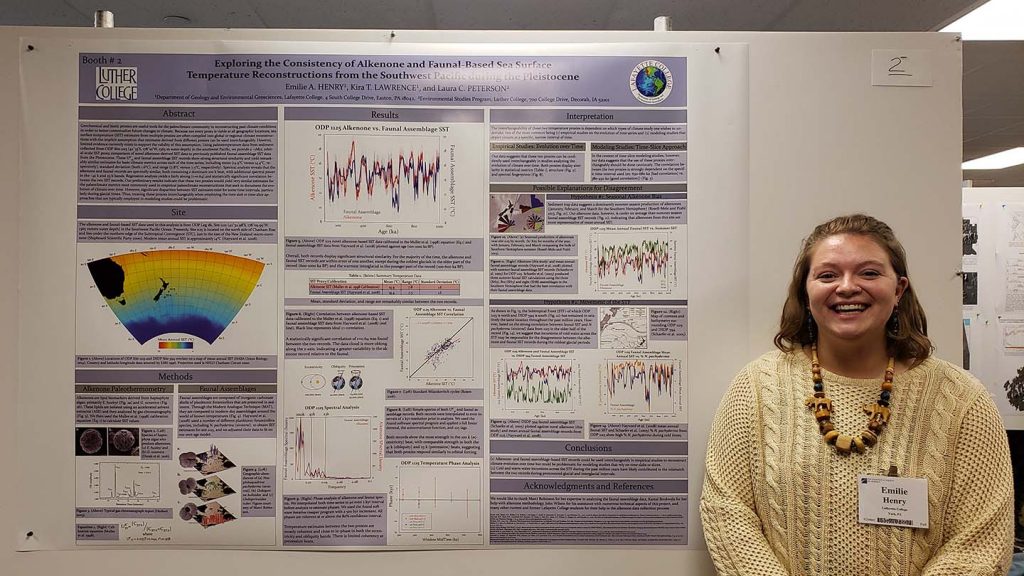 “The biggest lesson I learned from the research experience is that science is not always straightforward,” Henry says. “We spent a lot of time talking through things and brainstorming different approaches. It was very cool to see that between Professor Lawrence and her colleague, Marci Robison at the U.S. Geological Survey in Reston, Virginia. We could talk and think and bounce ideas off each other. I really valued being part of that.”

Henry juggled her course and research work with three campus jobs. She worked as a teaching assistant and an assistant student supervisor at the campus climbing wall, a position that entails managing seven employees. Henry also made time to work as a peer tutor, helping students, often outside her major, better understand geology. The week of her thesis defense, Henry still maintained her five tutoring sessions.

“Being able to share the subject I love with others has been a great experience,” says Henry, who minored in government and law. “I remember working with one guy on a concept he didn’t understand. I tried presenting it in different ways, and then all of a sudden, I could see the moment when he got it.”

Henry, whose family currently lives in York, Pennsylvania, grew up in Stratford, Virginia, where her love for the outdoors sprouted.

“We had a small forested area to play in, and I was always running around outside and climbing trees,” she says. “I have always been drawn to nature. I don’t think I would thrive working in a library or lab full time. I’m OK with a little lab time, but I think I’m best suited to field- work. That’s where I’m happiest.”

That means she will be very happy this summer.

On June 8, Henry is leaving for Namibia, where she will be working as a research assistant for Dustin Morris ’17, a geology program graduate who is now pursuing his Ph.D. at California Institute of Technology (Caltech). Henry will spend two months working and living out of a tent within a zebra reserve in order to study “snowball Earth deposition.”

“There is a theory that 650 million years ago, the entire Earth was glaciated—even at the equator,” she says. “We are going to be mapping cap carbonate rocks to figure out how the rocks there fit into the scheme of things.”

After a brief return trip to Pennsylvania, Henry will then set out for her next destination: She has accepted a two-year position with the Peace Corps in Western Africa, where she will be working in agriculture to support farmers, help to manage their resources, and promote gender equality.

“I am interested in so many things, but what I really want to do is use science to help people and improve their way of life,” she says.

“As a member of the developed world, I feel I have a high standard of living and that I have a debt to pay,” she says. “I personally feel that I owe something to everyone who is going to be hurt by climate change. Those with the fewest resources are often the most vulnerable. I feel a really strong sense of purpose and want to try and fix or improve their lives any way I can.”

Because as Henry knows, one person’s actions can make a big impact.