Laundry at college isn’t easy. For many students, the process begins with finding quarters and then searching for soap. Locating a free washer is next and maybe the troubling decision to move someone else’s finished load. Do you sit with your machine in order to stake your claim for your next load? Do you walk away in hopes that no one rummages through your clothes to pilfer your favorite T? Never mind finding the right time of day to accomplish it all.

Michael Anekwe ’22 understands the plight. He does his own laundry between the demands of his classes and his commitment to the basketball team. But he saw an opportunity as well. 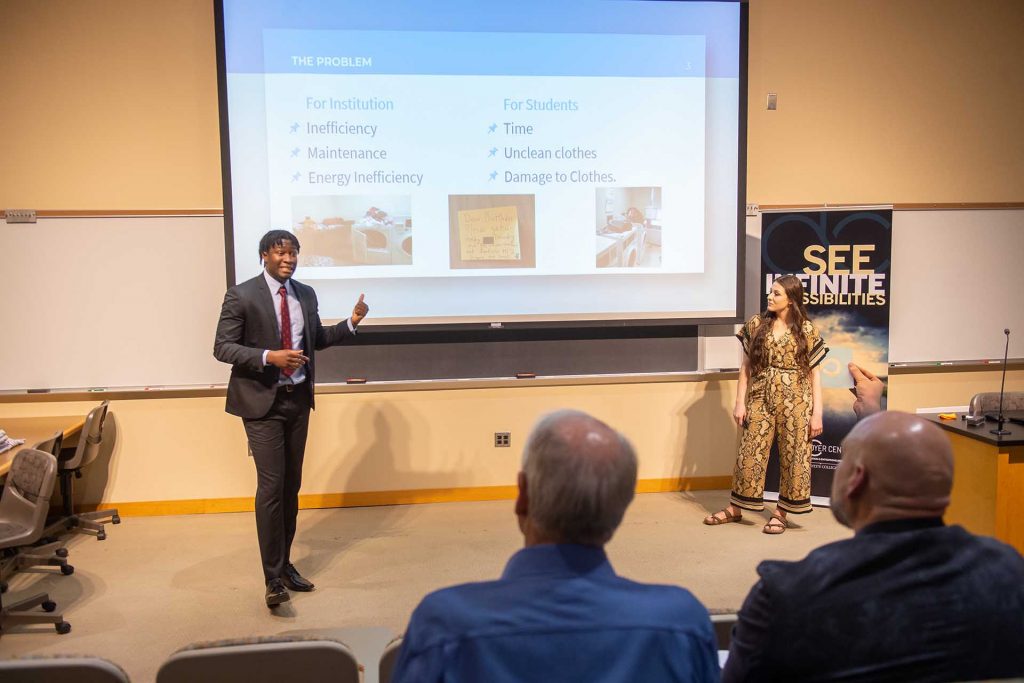 He and Serena Fenaroli ’22 decided to pitch the idea of Quick Loop laundry services at a recent Dyer Center for Innovation and Entrepreneurship competition. Their subscription-based service would start at Lafayette but could quickly expand across the rich college marketplace in the Lehigh Valley.

“I’ve been thinking of operating a business after college,” says Anekwe. “When I saw the chance to bring an idea to the Dyer Center Business Pitch, I thought ‘Cur Non’ and entered.”

That Why Not moment led him to Yusuf Dahl, director of the Dyer Center, who provided a sounding board. Dahl listened to the students’ idea, pushing it and them to consider all angles if it was going to be a finalist for the big competition.

Several teams signed up to enter, but only a few would stand before some powerhouse judges: 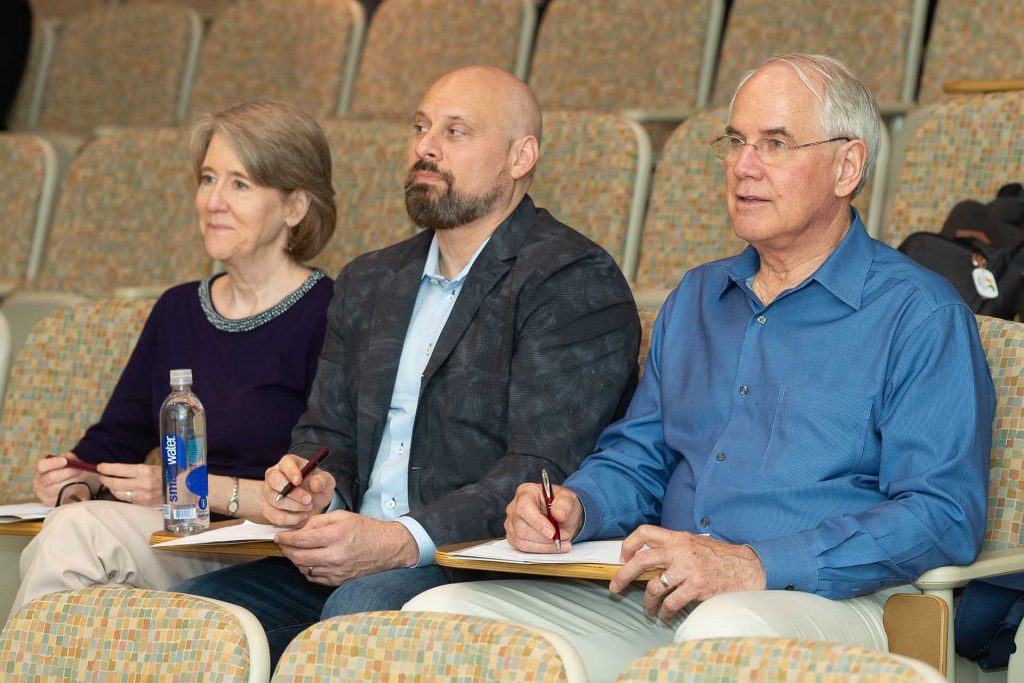 “With such a prominent group of alumni and parent judges, I wanted to ensure that the students were ready with presentations that could withstand the questions they’d be asked,” Dahl says.

That meant some teams wouldn’t make it in.

Keon Modeste ’21 and Basit Balogun ’21 were in such company. Together in January they had attended Lafayette’s New York City Technology/Innovation Career Track, an immersive program that provides students with exposure to potential careers, opportunities to develop their professional networks, and experience in an urban environment where they may eventually work and live.

They were inspired by the startup companies they visited and began hatching ideas.

Their idea about updating office spaces to appeal to millennial employees is one that Dahl liked.

“We had several first-year and sophomore teams, which indicates how engaged students are with cultivating an entrepreneurial mindset,” says Dahl. “I am hoping that some teams will further research, refine, and develop their ideas for future competitions.”

Five teams made the cut, and each one had 10 minutes to present its ideas to judges on the day of the competition. 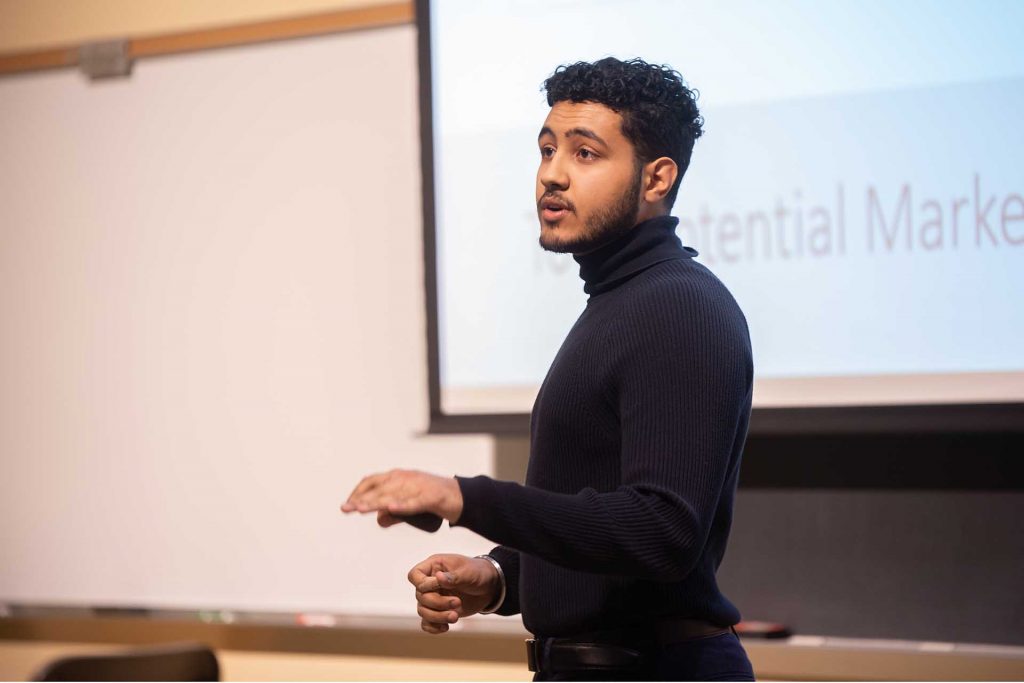 Ideas varied from laundry subscriptions to a restaurant supply business to food search app to a heavy hitter … Go Peer.

Ethan Binder ’19, Erik Laucks ’20, and Zura Mestiashvili ’20, co-founders of GoPeer, have been operating the company from their dorm rooms for two years. This past year, Binder was on the road to Boston several times a week to participate in Mass Challenge, a global, competitive business-accelerator program for early-stage entrepreneurs. 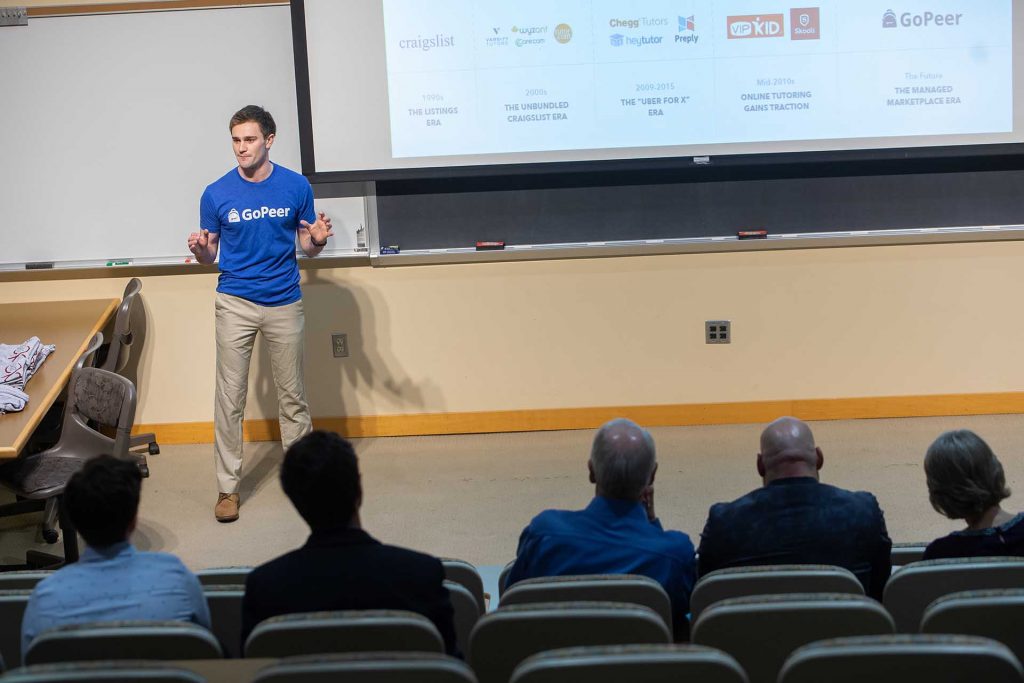 Having already been named a Top 50 on Fire in Rhode Island, GoPeer is an educational technology company that is reimagining the tutoring industry in hopes to make it more accessible, affordable, convenient, and effective through a unique near-peer learning model.

The final contestants were Alexander Homsi ’19 and Rebecca Adelman ’19 with their idea called Coded Cup, an augmented reality app that helps turn any container into a measuring device.

The idea came to Adelman while studying in Indonesia. She wanted to make her host family a plain vanilla cake but lacked the measuring tools to ensure her cake wouldn’t go flat.

While she never was able to make that cake, she and Homsi believed in the idea and worked with patent lawyers to earn a provisional patent.

“We have been in enough college student kitchens to see that this generation would benefit from this tool,” says Homsi. 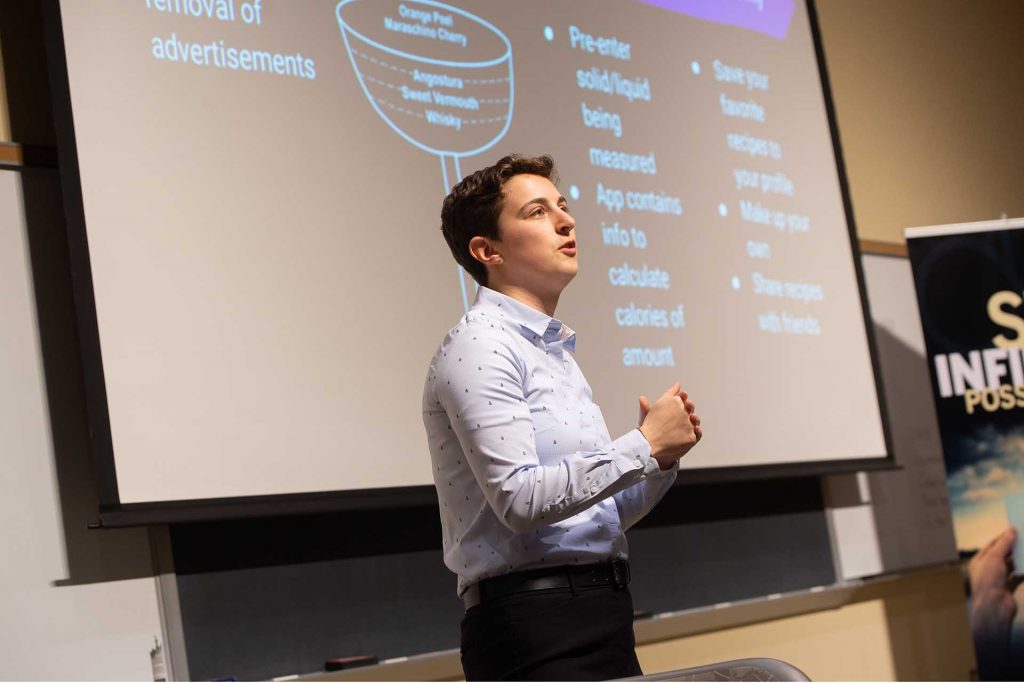 “And it could be a great help for travelers, tech-friendly parents who are working on projects with kids, mixologists who are making cocktails, diabetics who are measuring out precise amounts, and dieters who are counting calories,” says Adelman.

Like the other teams, Homsi and Adelman worked with Dahl to help with financials.

All the presentations were followed by pointed and specific questions from judges who wanted to ensure that ideas would succeed, scale, and be solvent. Then deliberations began. 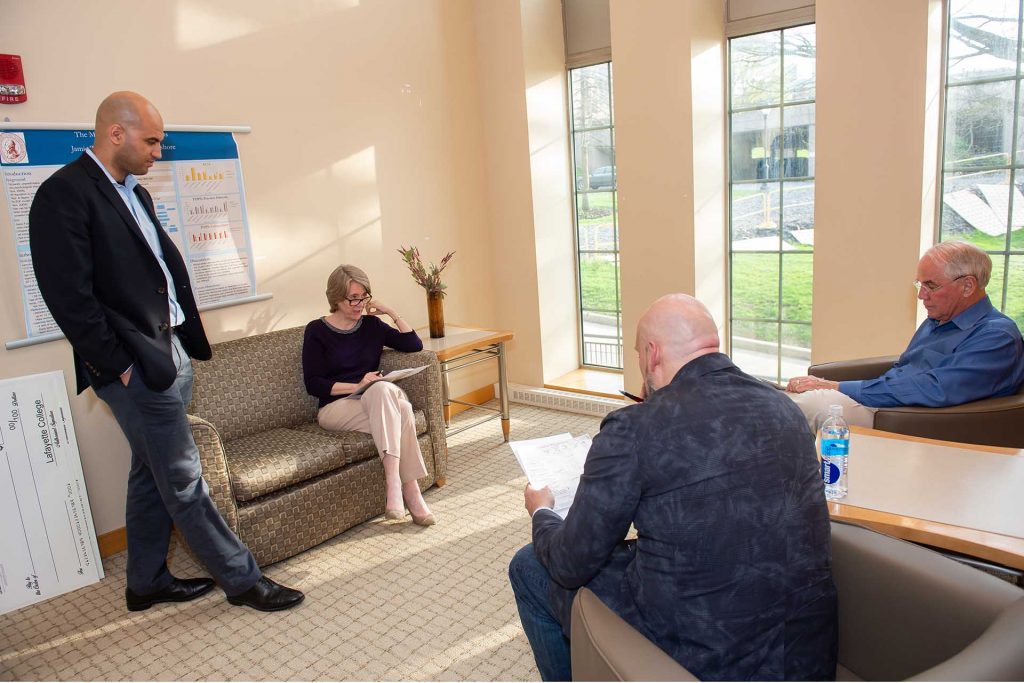 “The judges were really split,” says Dahl. “It speaks to the quality of the teams—their ideas, presentations, and ability to answer hard questions.”

Coded Cup then represented Lafayette in a regional pitch competition, pitting the College against seven other colleges and universities. Coded Cup again bested the others, earning another $2,000 prize and some serious bragging rights that remain hard to measure … until their app is in beta testing.