“I thought we were quitting the game?”

“I thought you were gonna stop asking to quit!”

“Does that mean I win?” my dad interjected, giving my arguing younger sisters a new target to direct their anger at.

It was family game night, and all six of us were splayed around a coffee table, staring at a Trivial Pursuit board with varying degrees of intensity. My sister Lily bore down on the game board nervously, shooting pointed glares across the table at my sister Molly. My dad looked on, laughing softly while my mom smiled. Meanwhile, my 11-year old brother, Cody, who had been roped into the game only after much guilt-tripping from me, gazed up at the table despondently from the rug he was sprawled upon.

While normally I’d be hard-pressed to subject Cody to a trivia game for more than a few minutes, his prolonged attendance was warranted by the approach of a special occasion: In the morning, I would be leaving our home in England to start my first year at Lafayette College.

Though I am originally from New York, my family has lived in Europe for the entirety of my adolescence, which makes the logistical challenge of getting to campus, moving into a dorm, and coordinating with roommates a little … interesting. It necessitated the swapping of my British SIM card for an American one, for example, a feat I courageously attempted at a gate at Heathrow Airport. With my knees clamped around my water bottle, I squirmed as I tried to wrench open my phone’s SIM slot, accidentally sending a high-pressure jet of water spurting from the bottle all over me (much to the amusement of a middle-aged woman sitting nearby).

One thing that certainly made the transition easier, however, was participating in Lafayette’s student-led Pre-Orientation Service Program (POSP). As a volunteer with POSP, I was able to move in a couple days early, a process facilitated by my grandparents, who live in New York and were able to stuff the car with my several suitcases and haul me to Easton at six in the morning on our early move-in day. Once on campus, despite my insistence that I could move everything to the dorm myself, a group of four veteran POSPers set to work with my bags and completed in about 20 minutes what definitely would’ve been a three-hour-long ordeal for me alone. Over the next few days, around 40 other first-years and I were guided by older students in a variety of service activities, trips downtown, and dinners with upstanding community members. We were even treated to a game night featuring a round of Leopardy that was at an almost Nylund-level of competitiveness. Every day, several hours of service in a designated program was followed by one such activity. For me, this service entailed working with a few other students to bring activities like karaoke, bocce ball, and painting to the residents of a senior center in neighboring Nazareth. At the end of an incredibly wholesome, inspiring, and thoroughly jam-packed couple of days, we were left to integrate with the rest of our class for orientation, and then finally to fend for ourselves in the wild, unfamiliar territory of the actual college experience.

It was a relief to discover that despite the various horror stories I had read online and heard from older friends, going random landed me two roommates who are insanely smart, infallibly kind, shower very regularly, and do not seem to take issue with my near-constant use of the oil diffuser I snagged as a small pre-college indulgence. However, some of the inventions and experiences unique to this new territory have proved less easy to navigate. (There are add/drop forms! Night classes!) The first days of college came to feel like a blur of new faces, visits to the registrar’s office, and rushed power walks up and down College Hill. 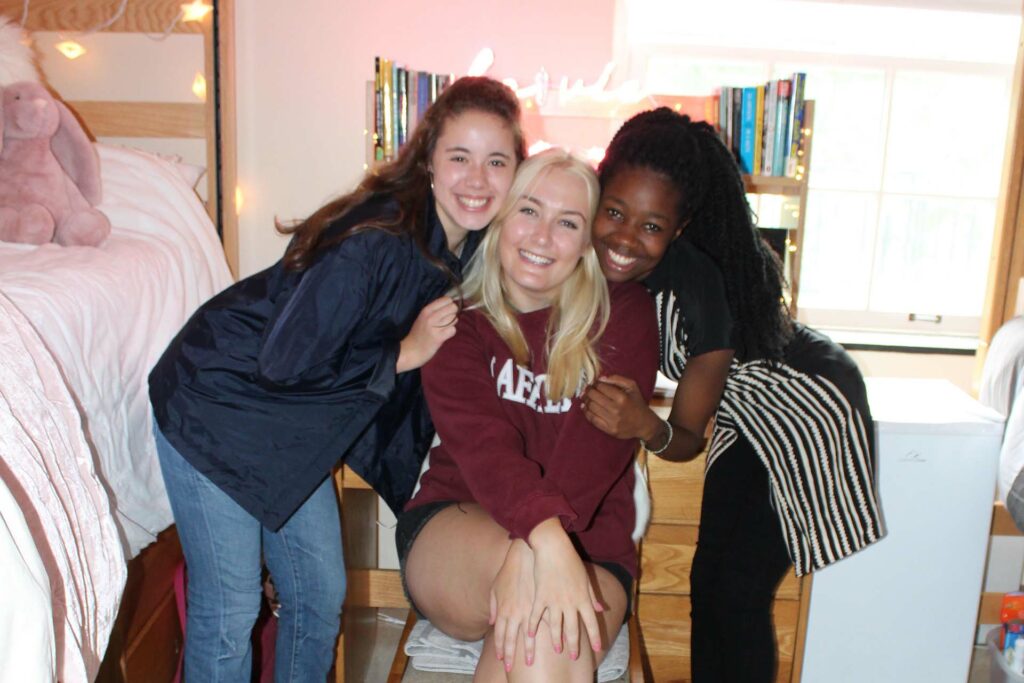 Midway through our first week, I decide to start my reading a little too late. When I take off my headphones and gather my books to finally crawl to bed, the early hours of the next morning have arrived. As I walk down the darkened hallway from the common room to my room, I am struck by a sudden, startling quiet. The hall is half-lit, fluorescent lights on either side emitting a vague, whiny hum. There is a sense of strange, abandoned stillness. I feel like I am standing in the middle of a beehive that has just been vacated, leaving only a vague echo of its buzzing inhabitants to bounce against the walls. In the hush of the night, it seems implausible that behind each of the tens of doors along these walls are three (presumably non-procrastinating, already sleeping) individuals. For the first time in a while, I am alone.

It is a disorienting realization, almost as disorienting as the thought that my time is now all my own. I don’t need to wait for anyone to tell me to do something or to be back home at a certain time. It is even more disorienting to think that these past few days, which already feel like a lifetime, are just the tiniest blip in the four-year story each of us first-years have begun writing for ourselves.

Earlier today, a group of new friends and I headed to a local café to do homework for a few hours. We talk briefly about how surreal it is to be at college, and how unbelievably lucky we are to be here. The backroom where we sit is hushed, and though we each work individually, we are not alone. There is something profoundly significant about silence between friends: a milestone of comfortability in which there is no longer any need to assert interest or affection in words. As I look out the window and think about the beauty of this kind of stillness, one of these new friends stops typing and looks around the table.

“I think I like college, guys,” she announces, smiling contentedly.

We turn back to our work, all nodding in quiet agreement.