By week three of classes, if someone asked Diane Allie ’23 where she was from, she answered South College. Puzzled looks then prompted her to say Queens, N.Y.

When Sara Vaca ’23 spoke Spanish while walking across the Quad, she never got judgmental glances and kept speaking fluently and freely.

Recognizing a moment of acceptance, whether feeling at home, safe, or like you belong, matters when living in a place that might seem like a world away.

Both first-year students made smooth transitions to the Hill, based in part on a journey of exploration that started well before their senior years in high school. 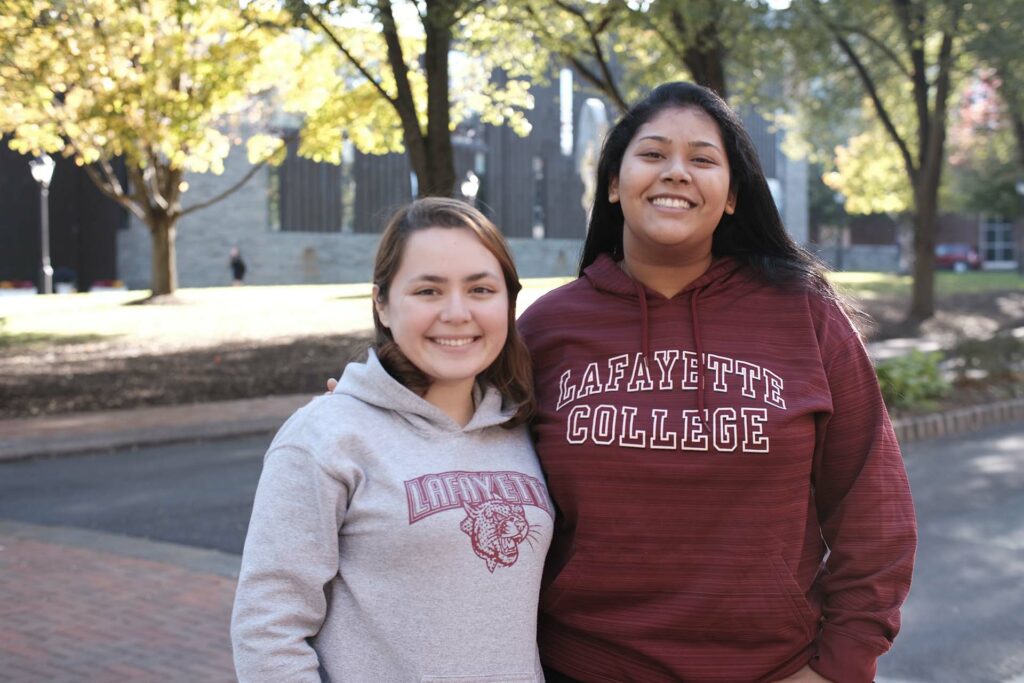 Allie visited the College during her sophomore year as part of the Opportunity Network Fellowship. It was one of several college trips. She was struck by the admissions officers she met. “Their honesty felt legit,” she says, “when compared to other campus tours I took where people don’t want to reveal what students of color might see as obvious.”

Vaca was a junior when she began to look at colleges. Her counselor mentioned Lafayette. Doing her own research, Vaca was intimidated by what she calls Lafayette’s “tier one status.” When a College admissions officer visited her school, she was so nervous to interview that she broke down into tears. “It was the first interview I ever had, either job or school, and such an important interview, and I was scared,” she says. She impressed in that moment with her authenticity.

Both were invited to attend Our Beloved Community (OBC), an admissions event named for Martin Luther King Jr.’s vision of a society that embraces each of its members and celebrates their differences. Students nationwide converge on the Lafayette campus to engage the community and discuss a variety of social justice topics.

“I arrived on campus and felt so stressed and pulled apart,” says Allie. It was only when a server in the dining hall sat down out of the blue and talked to her that Allie settled down. When the program began the next morning, everyone was there. Again, the day was hinged on honesty. Then guest speaker Taaha Mohamedali ’11 presented a workshop on creating a ripple effect that made Allie think of women in STEM. “Everything really came full circle for me,” she says. “It felt like I found a new family. I felt safe, not scared.”

Traveling from Texas, Vaca flew into Newark late at night. Unfortunately, her bags weren’t on her flight. She came to campus with the clothes on her back. Her host lent her items for the next day of programming until an admissions counselor asked what Vaca needed and went on a Target run. “She brought me a bag of stuff, everything I might need,” says Vaca. It was just the validation she needed. “All day long people were hugging me and being supportive,” she says. “And not cultural hugs, but real emotional hugs. So at the end of the day when I saw the bag of personal items, I had such reassurance that people at Lafayette are really there for you.” She went back to her host’s room and submitted her application for early decision. When she told people, she got what she had grown to expect: more hugs.

Allie is smiling again. “When you grow up in New York City, you rarely see people smiling, but it is so welcoming here,” she says. She notes that people say “hi” and hold doors, and classmates work to get to know each other. “What I experienced at OBC and during campus visits, Lafayette has lived up to it and more,” she says.

“I don’t feel like a number here,” says Vaca. “People know me, and I don’t have to pretend to be something I’m not. There is a real sense of community.”