With gentle voice and clear detail Xiaoze Xie, artist and Stanford professor, unfolded his life and work, like a book, layered, chaptered, and rich with story.

He spoke before guests at Skillman Library while on walls and display cases surrounding him were his work, both paintings, photographs, and books.

Growing up in Guangdong Province, China, Xie began his artistry, like any child, with chalk on cement. It soon moved to paint on paper. He loved it all and had no training and no teacher. 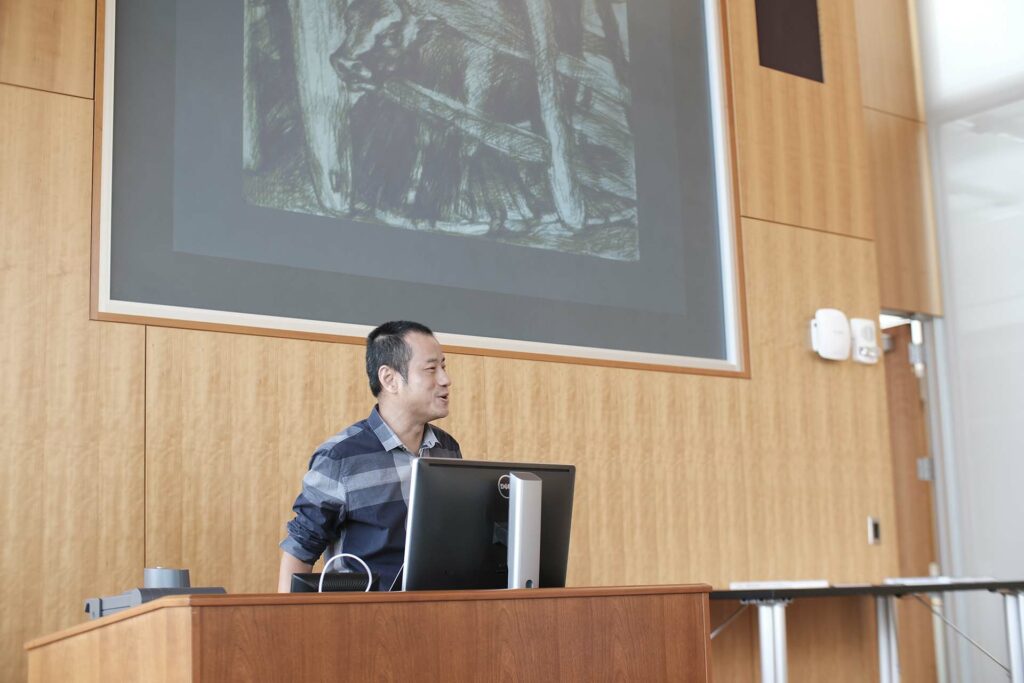 As he grew, he went to architectural school but wasn’t happy. “I wanted something more free,” he says. All the while he continued his sketches. While he had a variety of subjects, libraries became his first focus–U.S. libraries, Chinese libraries, and museum libraries.

He painted in photorealistic detail books on shelves. “It combined my love of geometric shapes, architectural patterns, and color,” he says. “It was a space for light and dark and form and void.”

He captured the “atmospheric decay, passage of time, and layers of memory.”

Soon he was painting newspaper stacks, where old papers accumulate. “It was a mundane object with encompassing information, a modern relic,” he says. “Today, with the decline of print media, these feel nostalgic, a eulogy of sorts.”

The work evolved into painting what he called “fragmentary narratives” where he would focus on a section in a paper with its references to historical events and temporal matters.

As his career became more rooted in academic research, he took an interest in destruction and censorship. This is where his exhibits in Skillman Library take life.

On the walls are his photographs of ancient Chinese books, banned for their philosophical, historical, and/or political content. The images are those of a documentarian: Banned books with pages splayed on a black background with a metal ruler beneath. 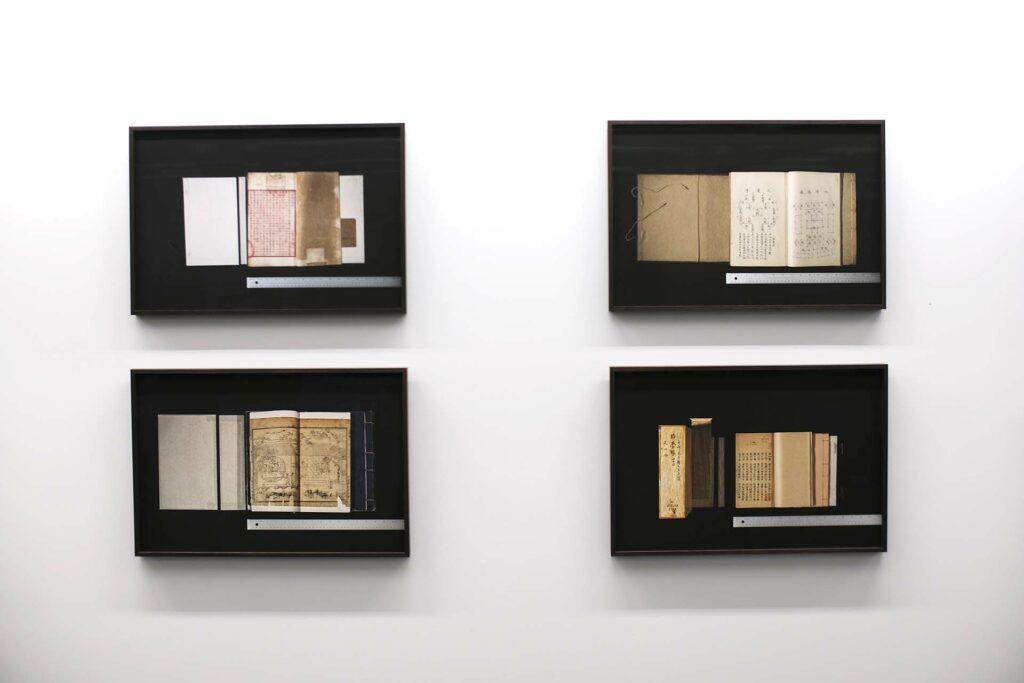 The pieces either challenged traditional thinking or predicted the fall of dynasties, stories that ran counter to the teachings of religious or political leaders.

Alongside these images are a collection of banned books, removed from shelves between 1911 and 1949. Xie started to collect them and create work in different formats including painting, photo, and video. 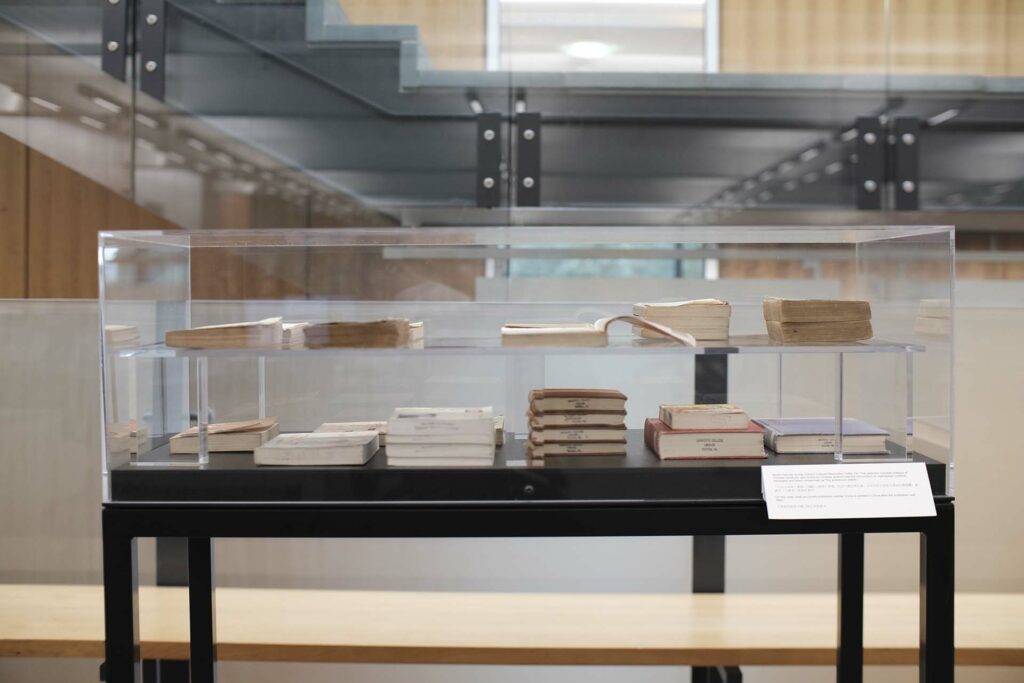 At Skillman, the books are layered in cases. The top layer is the first edition banned book. Beneath those volumes are the “supplements,” including later editions and editions printed in other countries and smuggled in. The Skillman exhibit also includes Western books from the College’s Special Collections that have been banned or challenged in the U.S.

The exhibit in Skillman runs concurrently with a companion exhibit of Xie’s work at the Asia Society in New York City.

“Art and politics overlap,” he says. “It makes what has been said visible, bringing it back into the light.”

This exhibit and lecture is made possible by the Friends of Skillman Library and by Stephen Parahus ’84. Some first editions on display include gifts from Joe Nechasek ’62. 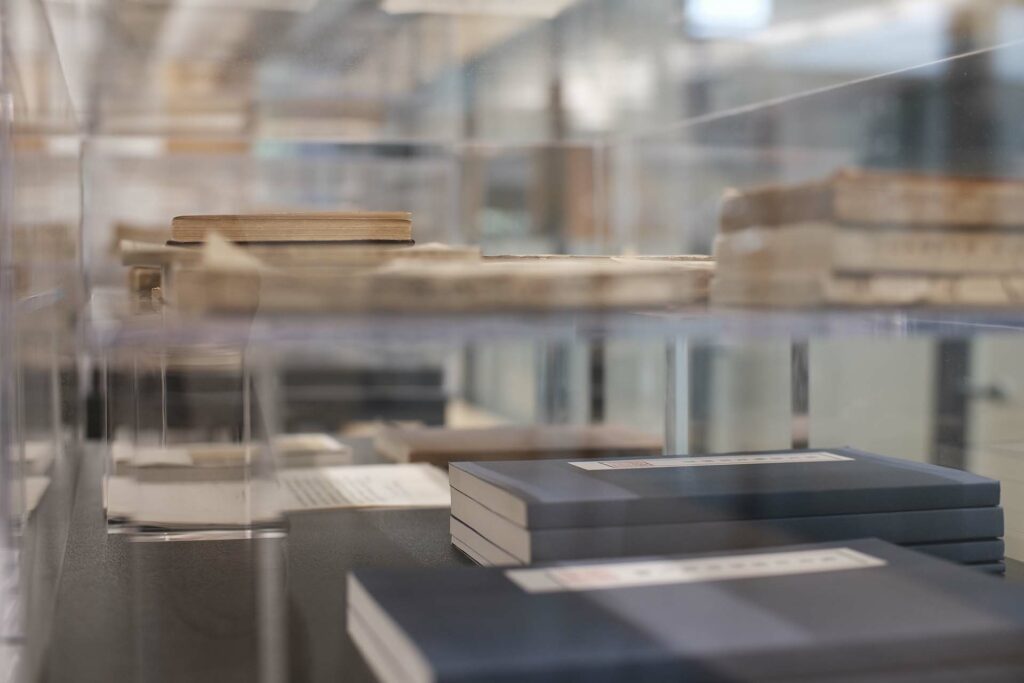