It’s a dreary February afternoon, and Jeff Helm is hard at work in his office, refining the stage presence of Hans, a strapping, well-chiseled cast member in the College’s upcoming production of Heddatron.

Hans is one of five robots in the play by Elizabeth Meriwether, a reimagining of Henrik Ibsen’s classic drama Hedda Gabler. Surreal and comic, the play, which opens Feb. 28, brings together a 20-member cast of robots and humans and a collaboration between Lafayette’s mechanical engineering and theater departments.

Heddatron tells the story of a 10-year-old girl who’s trying to deal with her suicidal mother, Jane Gordon. The girl makes up a story, set in Michigan in 2006, about her mother’s abduction by robots who take her to their rainforest and force her to perform the title role from Hedda Gabler. While the family, back in Michigan, tries to locate Jane, the play takes another surreal twist as Ibsen himself appears. As he writes Hedda Gabler, rival playwright August Strindberg taunts him. 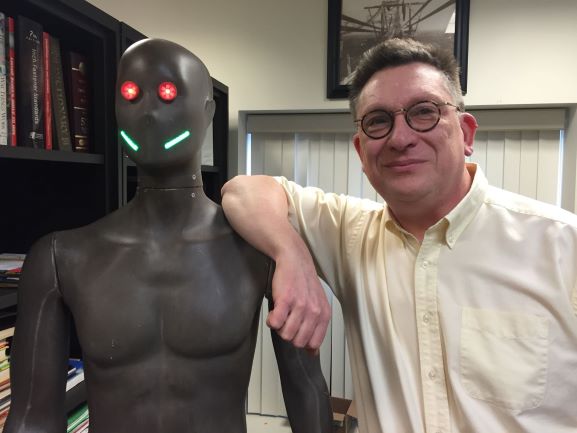 “I’ve worked on these bots virtually every day since the end of classes last semester,” says Helm, chair of the mechanical engineering department, and who, along with his degrees in engineering, has an undergraduate degree in theater. He regularly assists the College’s theater department with set designs.

“Building five of these bots was a significant task,” Helm says. “I’m going to say there are thousands of electrical connections that you make to build just one bot, and everything has to be correct. It’s a lot easier to get a human actor on the stage.”

Sinewy Hans, for example, sits atop a remote-controlled wooden platform, his glowing eyes changeable and a voice that’s eerily robotic.

Students who have been involved in staging Heddatron enjoy the collaboration of the arts and sciences.

“It’s a common union, but most people don’t always recognize it,” she adds.

Nick Moosic ’21 (mechanical engineering) has an interest in robotics and finds the play liberating.

“Usually you get a diagram or a set of restrictions,” he says. “Here you get a story and you have to figure it all out. And it encourages mutual respect between theater and engineering.”

“I call it a surreal STEM journey,” says Michael O’Neill, associate professor of theater, who’s directing Heddatron. “It’s the first play like this that I’ve directed. It’s incredibly challenging. Usually we start tech rehearsals 4-5 days before a show begins; this is two weeks before. It’s all about the tech.”

The student response has been very positive, O’Neill says.

“It’s really a lot of grappling with things I haven’t experienced before and learning in the moment,” says Emma Krebs ’20 (theater), who worked with her mechanical engineering colleagues on the robots. “You really become dependent on others.” 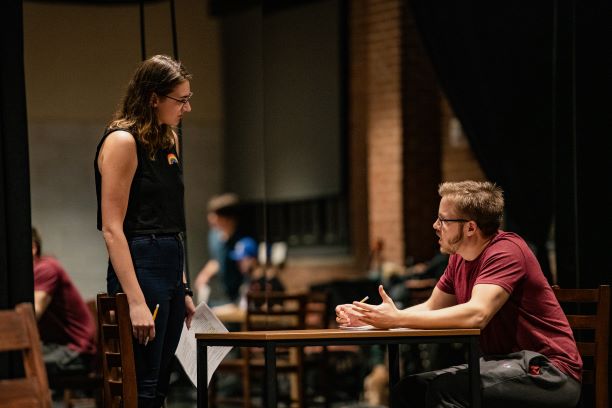 Krebs is playing the role of Mrs. Ibsen, a shrewish, bitter wife who feels that her husband no longer harbors any affection toward her.

“She has an affair with her husband’s rival, August Strindberg, my least favorite playwright, which I think is hysterical,” Krebs says. “It’s definitely out there, and it’s fun to be in a nontraditional play that takes place in three different worlds.”

Alex Owens, technical director and adjunct professor of theater, says five teams of engineering students have been working since last spring on the production, and building robots with drive trains and movable limbs and head and eye motion.

“Robots can’t improvise—that’s the exciting and scary aspect of this production,” Owens says. “It adds another layer of complexity. The show must go on, and we’ll find ways to make it work in melding together pieces of Hedda Gabler and pieces of this other world.”

At one point, bulbous-styled robots of the 1950s and 1960s were discussed.

“But the problem is, this young girl, the main character, is from 2006, and there’s no reason why she would recognize a robot from more than a half-century ago,” Helm says. “The idea is that she conceived robots out of stuff that was familiar to her.”

In addition to Hans, whose anatomical shell was found on Craigslist, there is the father robot, Billy, an amalgamation of a five-gallon Lowe’s bucket for a head, a beer cooler torso, and barbeque tongs for hands. The judge robot is stark in a black and white wastepaper can, the maid a broom with a pair of eyes. The robots interact with the human actors and at one point even perform Bonnie Tyler’s “Total Eclipse of the Heart.”

“The audience will enjoy it and be baffled by it,” O’Neill says. “I wouldn’t recommend that people bring children because of the language in some situations.”