Senior Riley Alvaro ’20, a psychology major from Ridgewood, N.J., stole the hearts of 180 attendees at Friday’s Scholarship Recognition Dinner as she spoke about her path to Lafayette. A recipient of three endowed scholarships, Alvaro hopes one day to focus on psychological diseases as a pediatric psychiatrist. Her tenacity to never give up, even in the face of extreme adversity after losing both her mother and sister before Alvaro turned 12, motivates her to push herself continually in all facets of her life.

“After experiencing the loss of so many people whom I loved, I decided to prioritize choosing an institution in which I could be a member of a compassionate community that respects each student’s individual story,” explained Alvaro during her speech. “Unlike the tours I had taken at other schools, my first visit at Lafayette was not just exciting, it was inspiring. Within minutes of arriving, I was greeted by more than one student before I had even reached the doors of Markle. Lafayette felt like home. While I had some doubts about whether I would be able to afford attending the College, I applied Early Decision. Upon opening my acceptance, I was ecstatic at the prospect of attending my favorite school. But this excitement quickly faded as I recalled the reality of my current financial situation and how difficult this would be for my family. However, after reviewing the letter again, this time more carefully, I read a sentence that would change my life. I knew that I would be able to attend because I was selected to receive financial support from the College’s generous donors.”

Alvaro is involved in many clubs and activities including serving as a student associate on the Board of Trustees’ Development, Alumni, and Community Relations Committee, director of Student Organizations for Student Government, member of the Student Conduct Committee, and much more. All of which, Alvaro notes, would not have been possible without financial aid. 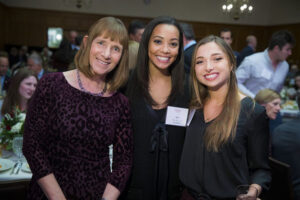 Last week’s dinner marks the 14th celebration held at the College to honor the importance of scholarship support and close connection between benefactors who create scholarships and students who benefit from their generosity. Forrest Stuart, assistant vice president for financial aid, told the story of another student whose life was transformed through scholarship support.

“I want to share an example of a student who exemplifies ‘bringing the best’ to Lafayette. I am thinking of a current senior who transferred to Lafayette College in the fall of 2017. In fact, the student was denied admission as a freshman but was able to do well enough at a community college to be later accepted at Lafayette,” explained Stuart. “The student comes from a single-parent family with a family income of $15,085. The parent could not contribute anything to this student’s education, and we met the student’s demonstrated need of $68,640 with no student loans. Since joining the Lafayette community, this student has studied abroad in Greece, attended a Harvard pre-law summer program, participated in an internship at the U.S. Embassy in the United Kingdom, held work-study jobs on campus, and has given of himself by tutoring in the America Reads Program, and is a finalist for a Fulbright Scholarship. This student took full advantage of a Lafayette experience, but could not have done so without the institutional grant funding that your generosity provided.”

During the 2019-20 academic year, approximately half of Lafayette’s students received assistance through the College’s financial aid program. College-funded scholarships, grants, work opportunities, and loans total more than $55 million. Of this amount, more than $9.9 million is generated by more than 600 named scholarships that are part of Lafayette’s endowment or are funded through restricted annual gifts.

Lafayette made a bold decision in 2016 to adopt a strategic direction to enhance its affordability and distinctiveness through growth. To support this effort, President Alison Byerly created the President’s Challenge for Financial Aid, which will, for the fourth year in a row, aim to garner much-needed resources for financial aid through the 24-hour Bring the Best fundraising challenge March 9.

“When we launched the strategic direction, our goal was to increase our financial aid resources and move in the direction of becoming need-blind, meaning becoming a college that doesn’t have to consider whether a student can pay when deciding whether we want them to be a member of our community,” explained President Byerly during her remarks. “While we are always grateful for any kind of support to the College, I am particularly moved and grateful to those who have supported scholarships and financial aid because nothing is more critical to the future of Lafayette.”