The Lafayette women’s soccer team spoke up against systemic racism and police brutality by holding the NO JUSTICE. NO PEACE. #BLACKLIVESMATTER fundraiser via GoFundMe. All proceeds from the effort, which supports and stands in solidarity with the Black Lives Matter movement and protesters across the country, went to NAACP—the largest, most recognized civil rights organization in the U.S. The fundraiser collected more than $2,400 in a single week. Below, women’s soccer team member and biology major Mason Worthington ’20 explains how she and her teammates banded together to make a difference.

WHY WE’RE TAKING ACTION:
“My teammates and I were all frustrated with the systemic racism and police brutality that’s been going on in our country, and we all wanted to help. While there was so much we could do individually, we thought using our efforts as a collective unit to make a change was the most productive way to make something happen.”

HOW WE’RE MAKING AN IMPACT:
“All donations made to our fundraiser went to the NAACP. We chose this organization because we wanted our message to reach a national level. The NAACP has been around for a very long time, and we felt that our donations would be more sustainable in the long run.”

CHANGES WE WANT TO SEE:
“What we want to see is justice, equality, and just inclusion of the Black community. This conversation of racial injustice has just been a very, very long one, and people are just tired. I think that any form of justice, whether that’s police reform, better policies within the social justice system, or even just sparking a conversation within your family can make a difference.” 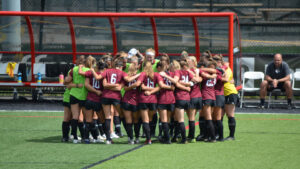 OUR MESSAGE TO THE WORLD:
“The team and I want to express our solidarity with the Black community. We want to amplify the voices of those who continue to remain unheard, and ultimately, we want to spark a conversation that many people choose to ignore or remain neutral about. We agree that racial injustice should not be a debate or a political matter. For us, we are seeing people who are, and have been, continuously failed by the justice system. We are seeing innocent lives and Black bodies exploited and abused. We believe that enough is enough, and there’s no better time than now to be the change we are so desperately seeking.”

THE NEXT STEP:
“We are going to continue using our social media platforms to raise awareness about systemic racism and police brutality.”