When death greets you at the door and says it is time, if your first thought is, “Let’s stop at the Wawa on the way,” you may be in trouble.

Trouble in this case would be loosely translated into the fiery pits of eternity.

But if finding a friend to share a journey to the afterlife is what you seek, then Wawa is as good a place as any.

That’s what Everyman does as he searches for a friend. With stops at Wawa, a fraternity party, Mojo, and Skillman Library, he scours College Hill for all kinds of help. Not only is no one interested in the trip, but Everyman also discovers his virtues over his short lifetime are more than a few points shy of a heavenly total.

His disappointment certainly affirms that damnation is imminent. 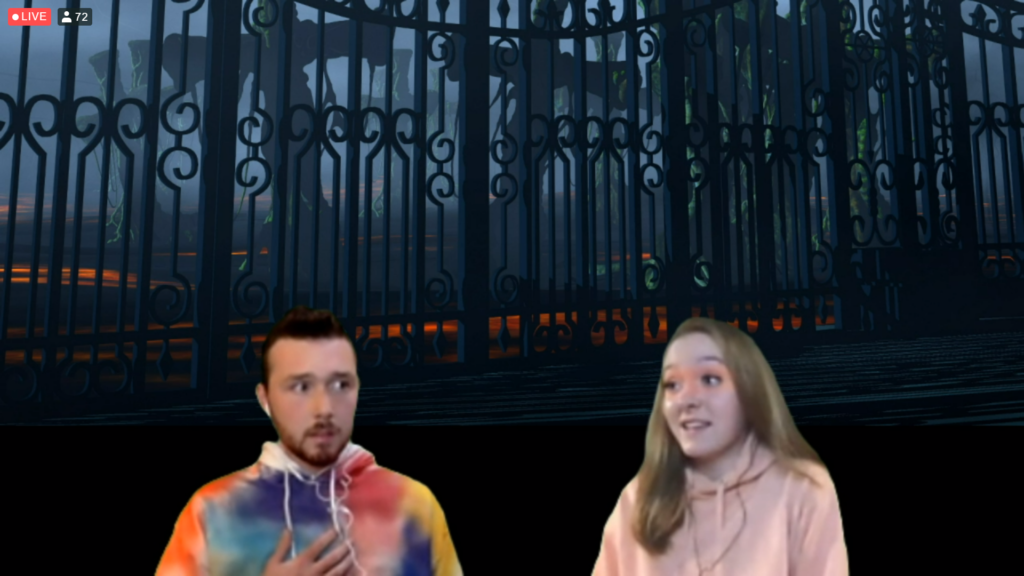 The morality play The Summoning of Everyman is filled with saving graces.

The show, produced by the Lafayette College theater department, was the first main stage production directed by a student in eight years. Doing more than directing, Sarah Frankel ’21 took the original text from 1510 and gave it a contemporary update and added a Lafayette twist.

The English and theater major is familiar with the adage that she should write what she knows. With such a universal play, her best opportunity to make it relevant to her viewers was to make it familiar.

With characters named Strength, Beauty, Knowledge, Good Deeds, and Fellowship, it is easy to see how Frankel could imbue these virtues with specific Leopard types.

“I was inspired by the students and what I’ve experienced here, so it was easy to make the characters feel real,” she says.

The script is written in rhyming couplets, a form that she retained. “I wanted to pay homage to the original,” she says. “The form also helps add to the timing and comedy.”

Her work over the summer as part of her senior thesis to update the text was then met with another twist—the announcement of virtual classes for the fall semester.

Frankel wasn’t new to this. As a member of the Marquis Players, she was seven weeks into rehearsal last spring as director for Footloose when students were told to remain home after spring break as a response to COVID.

Rather than viewing it as a setback, Frankel worked with the department and her crew to figure out how to make the show still come alive in a virtual space.

“Zoom is such a two-dimensional space where it feels you are speaking into the void,” she says, “so we were excited to reinvent the rehearsal and production process.”

After casting the roles, the actors and she helped the script evolve as they workshopped the play.

“Without Alex Owens, Everyman would not have been possible,” says Frankel. “He spent countless hours collaborating with me and building out the show. He was patient, encouraging, and went above and beyond to make the show a success.”

Actors had customized boxes shipped to their homes that included green screens, headsets, microphones, and some requisite red Solo cups for the party scenes.

It was the only way to pull off what Frankel was responsible for: the salvation of Everyman, a premiere of her contemporary text, holding the looking glass up to students, and a virtual main stage show during a global pandemic.

Wawa stop or not, this should give her some points when death comes knocking.