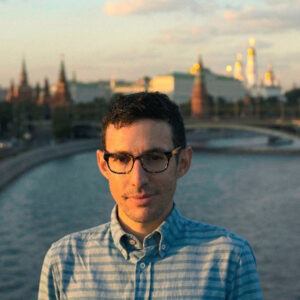 In his recent article, “Is Russian Meddling as Dangerous as We Think?”, Yaffa wrote about how, since the 2016 election, the spectre of Russia’s meddling has been amplified by our own anxiety. He also cites sources who argue that Russia “deployed the power of social media to transform the politics of the United States.”

Had the Internet Research Agency (I.R.A.), the Russian company engaged in online influence operations on behalf of Russian business and political interests, really managed to influence or change American politics?

Or, as Sanborn asked Yaffa, was the “influence of the evil Russians being overstated?” 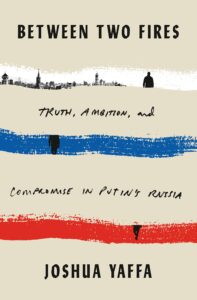 In this exploration of contemporary Russia, Joshua Yaffa introduces readers to some of the country’s most remarkable figures who have built careers and constructed identities in the shadow of the Putin system. (Image courtesy of Penguin Random House)

“I’m firmly in the camp that it is an established geopolitical fact that, especially in 2016 and long before, various kinds of entities, individuals, and organizations claim to be working in the name of the Russian state and won in the American information space with all kinds of disinformation. That’s a fact. What’s less of a fact is that it really comes down to a judgment call,” Yaffa told the class before quoting Thomas Rid, a political scientist at Johns Hopkins University.

“When judging the impact of something like an active measure by which we can say this information was successful or not, as a community we decided that it was more impactful than it was. Therefore, the Russian operation to interfere in 2016 was a success simply by looking at the response in American political and media circles to that operation. We decided that operation was a success.”

Yaffa then went on to point out that, based on his own observations as the Trump era has unfolded, it has “become clear that the ability for domestic politicians and domestic actors to muddle the waters with misinformation is beyond what any foreign state—Russia included—could ever dream of doing. There’s nothing that Russia can do to us that we can’t do to ourselves 1,000 times worse and with 1,000 times more impact.”

During the Q&A session, one student asked Yaffa if a lack of trust toward Putin and the Russian government had any effect on Russia’s response to the COVID-19 pandemic.

“In a time of pandemic, you actually do need society to kind of understand and have faith and buy into lockdown, quarantine, or other measures. And I saw the very beginning that Russians didn’t have that kind of wide-scale, collective sort of faith and buy-in on the lockdown rules,” Yaffa responded. “You also didn’t see the state thinking that it really needed to take care of the citizenry on an economic level. You didn’t see aid for individuals or small businesses. Putin was not a man in charge. He didn’t seize the day. He was really absent.”

Though physical distancing and remote learning has not been the easiest for students to adjust to, one benefit of holding classes virtually is that Yaffa, who has lived in Moscow for the better part of the last eight years, was able to take part in a way he wouldn’t have been able to if classes were being held on campus.

“Having classes held virtually allowed someone with his level of expertise to still connect and share his insight with students despite the physical distance,” says Sanborn. “The New Yorker has traditionally been a place where a lot of great journalism about Russia happens. Its current editor, David Remnick, was one of the great correspondents on the fall of the Soviet Union in 1991. I feel really lucky to have been able to invite Yaffa to come speak.”