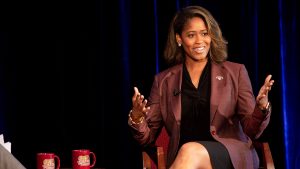 Sherryta Freeman, director of athletics, is quoted in a story published in Diversity Issues in Higher Education about the lack of diverse leadership at Football Bowl Subdivision (FBS) schools.

The latest report card from The Institute for Diversity and Ethics in Sport (TIDES) gives FBS schools a B- for racial hiring practices and an F for gender hiring practices. This resulted in an overall grade of D+.

Lafayette College is part of the other subdivision of NCAA’s Division I, the Football Championship Subdivision (FCS).

“I don’t think we see a lack of women because there are not qualified women,” said Freeman. “It’s more so in the eyes of the hiring managers a lack of confidence…that women can oversee football or that women can be able to oversee the head football coach. That’s definitely not true.

“We’ve done the work; we’ve prepared ourselves,” she added. “It’s just a matter of being hired by someone who believes in you. … Leadership is not based on gender.”

Categorized in: Athletics, Diversity, Faculty and Staff, In the Media, News and Features