The stamps Victoria Puglia ’21 has collected on the pages of her passport aren’t simply proof of the many countries to which she’s traveled over the course of her young life. Rather, they are carefully plotted points on the map of her journey to self-discovery—one that has been fueled by Puglia’s steadfast commitment to following her passion, and that has earned her one of the world’s most prestigious honors a student can receive: the Rhodes Scholarship.

The starting point of Puglia’s journey is Catalonia, Spain, where she was born into a multicultural household, and where she lived for 13 years until her family relocated to Wassenaar, Netherlands. Her mother being from Spain and her father Italian-American, Puglia learned from a young age the finer points of interacting with people from around the globe.

Victoria Puglia ’21 with her family

“I grew up in an environment of building bridges between people—dinner conversations and holidays with extended family members who don’t always have cultural or language affinities,” she says. “I attended international schools my entire life, so I’ve also grown up with many other individuals from different parts of the world. It’s cultivated my interest in travel, but it’s also ingrained in me the values of respect, tolerance, open-mindedness, and curiosity.”

Her multicultural upbringing also gave Puglia the unique opportunity to flex her language muscle: Not only did she grow up speaking three languages—English, Catalan, and Spanish—but she also learned how to speak French fluently and dabbled in basic German in high school. And having lived in the Netherlands for several years, Puglia can also understand some Dutch.

These are the experiences Puglia brought along with her when she underwent another major cultural shift and crossed the Atlantic to enroll as an undergraduate student at Lafayette College in 2017—a move that defined both her academic career and future. Puglia applied to Lafayette at the recommendation of her high school counselor, and immediately felt a magnetic pull to the College after touring the campus and meeting several professors and students. Her transition to a different continent and way of life, however, was not entirely without difficulty.

“I moved to the Netherlands with a lot of expectations that weren’t met,” she says. “Rather than going with the flow, I changed myself to meet those expectations, which made me incredibly unhappy. When I came to Lafayette, I found myself falling into that trap at first; but I reached a point where I told myself I have to let go and do what fulfills me.”

Although Puglia originally thought she wanted to pursue a major in psychology, she instead decided to embrace the College’s robust liberal arts program and signed up for courses in various disciplines to find what she was passionate about. One of those classes was IA 240: Pursuing Global Sustainability with Caleb Gallemore, assistant professor of international affairs.

“That class solidified an academic interest in food security I never knew I had,” Puglia says. “I became intrigued with international affairs, especially because I’d always seen myself as being a worldly person. And so, I ended up with a major in international affairs.”

“Victoria is driven by what she cares about,” adds Gallemore. “She’s not afraid to stretch herself intellectually and learn new skills in the service of trying to answer questions she thinks are important. One of the characteristics I think impressed the Rhodes folks was her openness to trying new things.”

Victoria Puglia ’21 at the Taj Mahal

And nothing demonstrates that more than Puglia’s most enduring pursuit during her college years: her time studying abroad. As part of her effort to remain true to herself and find her own fulfillment, Puglia embarked on a string of expeditions across the globe starting her first year at the College. Traveling and complementing her in-class lessons with real-world experiences allowed her to not only gain a new perspective on her studies, but also create deeper connections with herself and others around the world.

“Being by yourself in a situation that’s different from what you’re used to really forces you to grow,” Puglia says. “It’s humbling. Travel is one of the best things you can do to cultivate your worldliness, and challenge yourself to understand yourself and your values.”

As a dual American and Spanish citizen, Puglia took on extra work on campus to save money to study abroad, and she earned her first stamp in her U.S. passport with a trip to Senegal in January 2018. There, she took a course on modernity in Africa. “That’s where I made my first real, long-lasting college friends,” Puglia says. “I also realized the value of learning by immersion. It was an amazing experience, socially and academically, and I took it upon myself to do all I could to keep doing trips like that.”

Puglia kept her promise to herself and traveled to Sri Lanka and India in the summer of her first year and in the winter of her sophomore year, respectively. In Sri Lanka, Puglia spent three weeks as a volunteer renovating a temple for Buddhist nuns, which she says led her to think more critically about the value of volunteering, Western aid, and development. In India, she spent three weeks at University of Hyderabad learning about India’s history, politics, and economy.

But Puglia’s most influential trip came in the spring of her sophomore year, when she spent four months in Uganda at the School for International Training (SIT). Her decision to study there was born out of her interest in refugee resettlement. (In high school, she created a program to help refugee students assimilate into their new culture, and she immediately joined Refugee Action when she arrived at Lafayette.) Uganda, she says, “is one of the top five countries with the most refugees, and has the most innovative and welcoming refugee policies in the world.”

Victoria Puglia ’21 with her host family in Uganda

There, Puglia took courses on development, environmental issues, and informal economies, in which she learned about Ugandan and sub-Saharan development through the locals’ perspectives and various field excursions. She spent her last month in Uganda conducting field research in Adjumani, a district that comprises 18 refugee settlements—an experience that greatly inspired Puglia’s future research and career plans. She worked for a nongovernmental organization (NGO) called Alliance Forum for Development Uganda, which is the main implementing partner for the World Food Programme in the district, and is responsible for food distribution in most of the settlements. For four weeks, she helped with food distribution, shadowed external evaluators, and attended refugee focus groups.

“Not much has been written about that part of the world, so I read almost every single piece ever written and was able to clearly identify gaps in the literature,” Puglia says. “I also became friends with my translators, who shared with me their needs and concerns. So, I decided my final research project would examine the role of unstable food aid on socioeconomic structures in refugee settlements.”

Because the only form of income refugees receive is food aid, Puglia explains, many refugees are forced to use their food rations to pay for things like education or health services. Although NGOs provide those services for free, oftentimes refugees cannot access them. Through her research, Puglia identified that this issue perpetuated a cycle of food insecurity and poverty in the settlements. What she argued in her research paper was that by abiding by the theoretical underpinnings of food aid, we fail to see the reality: These settlements are missing circular economies, which would give refugees more autonomy, and enable them to become more resilient and provide for themselves in the long term.

“My translators also explained that the majority of Westerners who go to refugee settlements are high-level officials carrying out monitoring and evaluation for a couple of days,” Puglia says. “Despite these evaluations, settlement conditions don’t improve. I realized I had been naïve in my original intent and asked myself, ‘What am I doing differently?’ Because of the friendships I formed, I promised myself and them that I didn’t want to be just another foreigner who came, exploited them for my own gains, and never delivered anything in return. I made it my goal to learn as much as possible and do everything I could to improve the situation for them.”

Upon her return to the U.S., Puglia delved into an independent study project during her junior year, in which she analyzed the factors that contribute to refugee well-being in settlements. She studied broad trends in 80 refugee settlements across sub-Saharan Africa, such as stunted growth, infant mortality, land quality, vegetation index, malaria prevalence, access to education, and more to identify which variables most greatly contributed to malnutrition in the refugees that lived there.

Her findings highlighted the potential importance of vegetation in a settlement; access to potable water; government effectiveness; settlement placement near a city; and rapid malaria prevention, detection, and cure in curbing food insecurity. “To my knowledge, there are few studies of this kind,” Puglia says. “It was the first time I felt like I created new knowledge about a topic that could potentially help fuel policy decisions in the future that would create innovative solutions.”

Puglia took one final trip before the COVID-19 crisis struck the globe—she studied climate change in the Andes Mountains in Peru in January 2020—and before tackling her senior honors thesis research project on the relationship between acute food insecurity/famine and survival migration across sub-Saharan Africa, which she is currently working on.

Now that she will be pursuing her master’s degree at University of Oxford in the fall as a Rhodes Scholar, Puglia is looking forward to tapping into the abundant resources of the school’s Refugee Studies Centre—the world’s leading research institute dedicated to understanding forced migration and improving the lives of refugees—and continuing to dive even deeper into her own research, which she foresees becoming a lifelong project.

As Lafayette’s first-ever female Rhodes Scholar and second Lafayette student to receive the scholarship—the first being Charles Benjamin Schwartz 1911—Puglia explains she didn’t come to the College with the intent of winning the Rhodes. Rather, her scholarly pursuits happened to fall in line with what the program was seeking in its candidates.

“It demonstrates that the work I’m doing is important, and that gives me more motivation to keep doing it,” she says. “Whether I won or not, I was going to keep doing the same things, but now I’m in a better place to accomplish everything I want to accomplish. I feel incredibly lucky to have this opportunity.” 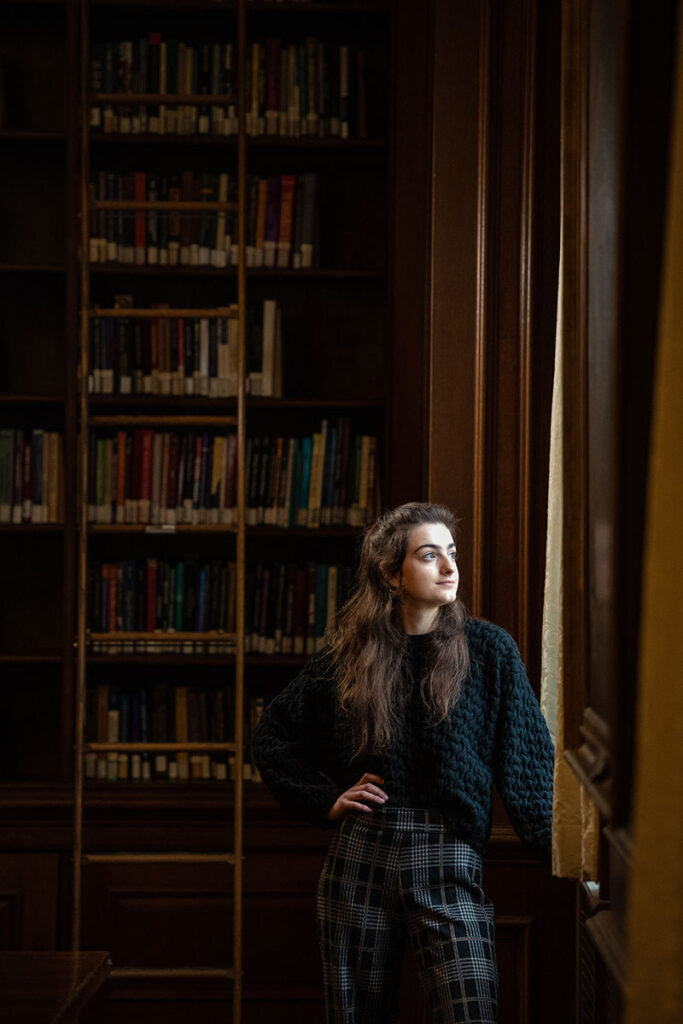 Because she enjoys being out in the field and working under high-stress conditions, Puglia says she hopes to one day work for a United Nations agency, like the United Nations High Commissioner for Refugees (UNHCR) or the World Food Programme. She also hopes to continue adding to her collection of passport stamps, as she plans to travel back to Uganda and other countries in the future. For now, she is focused on wrapping up her senior thesis, continuing her extracurricular work with the International Students Association and Refugee Action, and serving as president of the McKelvy House prior to graduating this spring.

“I’m driven by the conviction that if a human has the ability to think of something, they have the ability to do it. I look at the world through a critical lens, trying to see ways to make it better. We may not be able to address every problem in the world, but we all have skill sets that can be applied to something, especially if you find something that motivates you. What motivates me is wanting to help others. To see the abysmal conditions of the refugee settlements, as someone who comes from a history of immigration, and not do anything feels like a huge injustice. Now I’m committed to doing my part.”