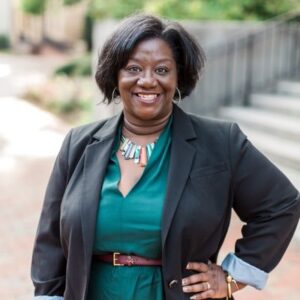 It used to be that if you wanted to get ahead in the United States of America, you went to college, got a degree, and got a good job.

But with student loan debt at a historic high, and because of persistent historical racial inequalities and gender inequalities that continue to make college unaffordable for millions of families—not to mention the way our culture denigrates women’s labor—we find students trapped between their aspirations and options, with some deciding that a college degree is not the key to a more stable future.

This was part of the wisdom imparted by Tressie McMillan Cottom, award-winning author, professor, and sociologist, during the John L. Hatfield ’67 lecture, which took place virtually March 23. The lecture was sponsored by the Lafayette libraries, co-sponsored by the Department of Women’s Gender and Sexuality Studies, the Diversity, Equity and Inclusion Council, and the Africana Studies Department, and was part of a yearlong celebration of programming and events commemorating 50 years of coeducation at Lafayette.

“To read Professor Cottom’s work is to watch the evaporation of the gap between rigorous data- driven research and powerful public facing arguments. She says her writing is intended to ‘persuade, to change, and to affect.’ And that is what it does,” said Mary Armstrong, Charles A. Dana Professor of Women’s Gender & Sexuality Studies and English in introducing McMillan Cottom. “It is work that makes us think, and it should make us act. And it makes the connections around thought and action as complex as they are compelling.”

Acknowledging the ways in which economic insecurity has propelled millions of Americans into direct democratic action—and how this could reshape higher education as we know it—McMillan Cottom prefaced her remarks by reminding her audience, “Easy conversations are the luxury of stability. Now is the time for more challenging conversation.”

Having extensively researched and written about higher education, McMillan Cottom spoke about how the idea of higher education, supported in the late 20th century across all communities, has deteriorated as today’s students—particularly women and women of color—have suffered under decreased state investment in public education and for-profit institutions promising quick paths to secure jobs.

“The good guys did everything we told them to do. They did all of that only to find themselves saddled with debt and with credentials that did not translate into improved economic and job opportunities,” said McMillan Cottom. “The same labor market outcomes that had pushed them into college to begin with—low wages, unstable work schedules, few promotions, or underwhelming promotions—left them with only two solutions. They could go back for more college and more debt.”

Better understanding the history that created and co-creates our present allows us a better shot of co-creating a future together, McMillan Cottom believes. Across the nation, as we debate the reality of the American dream, we must ask for whom it is true and to whom it has been denied.

“I am known for saying I do not deal in hope. I deal, instead, in the black feminist tradition of pragmatic hope. This is knowing that things could not go well, hoping that they will, and most importantly, working like hell to make a better future happen,” McMillan Cottom told her audience. “We have to invest in the institutions that disproportionately serve the students who have the fewest good choices for higher education.”

Tressie McMillan Cottom is the author of several books, including Lower Ed: The Troubling Rise of For-Profit Colleges in the New Economy and THICK: And Other Essays, a critically acclaimed Amazon bestseller that situates Black women’s intellectual tradition at its center. She has testified before the U.S. Senate subcommittees on student loan debt. She is also an influential voice on Twitter and co-host of Hear to Slay, a Black feminist podcast with writer Roxane Gay.