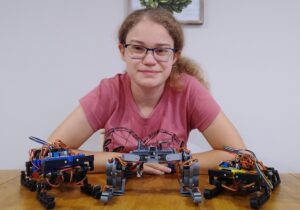 Mechanical engineering major Gabrielle Conard ’21 didn’t catch the robotics bug until the end of her sophomore year. When she began working with Alex Brown, assistant professor of mechanical engineering, on a low-cost quadruped robot design, she had no idea that less than two years later, the knowledge she’d acquired would go on to fund her academic future.

“One of my friends encouraged me to apply because I came into the process late, only about a month before the deadline,” recalled Conard. “The process involved several letters of recommendation, as well as a personal statement on how I became interested in STEM, how I was hoping to further the field of STEM, and how that will have a broader impact. The third component involved writing a proposal for a research project.”

Conard, who is currently working on a thesis developing a low-cost quadruped robotics platform that could be used by researchers who may have a limited budget (with Brown as her adviser), plans to utilize her fellowship to further her concentration in the field of robotics.

“I’m particularly interested in space robotics. I’ve always been a fan of astronomy, so either in grad school or beyond graduate school, I would love the opportunity to delve more into that area,” says Conard. “Building robots that could potentially help humans explore other planets would be really fascinating.”

Could You Be a Future NSF Fellowship Recipient?