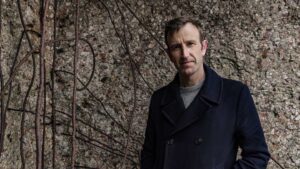 There’s no denying the impact humans have on the planet. It can be easy to focus our attention on things that are visible (landfills, glacial melt) or that we experience directly (pollution, weather extremes).

Changes occurring underground—in caves, catacombs, sinkholes, and mines—may be out of sight, but they shouldn’t be out of mind. That’s the message acclaimed British nature writer Robert Macfarlane shares in his latest book, Underland: A Deep Time Journey, which he will discuss with the Lafayette College community during his Hatfield Lecture on Wednesday at 4:30 p.m.

In Underland, Macfarlane explores the hidden world beneath the earth’s surface to reveal the far reaches of human activity. Underland was featured on several “best of 2019” lists, including The New York Times 100 Notable Books of the Year, NPR’s Favorite Books of 2019, and the Guardian‘s 100 Best Books of the 21st Century.

Co-sponsored by the Lafayette College Libraries and Office of Sustainability, MacFarlane’s talk is virtual, free, and open to the public (register to attend).

Here are five reasons to add this event to your calendar:

This topic is incredibly timely as the U.S. commits to cutting its emissions in half by 2030.

“Understanding the significant contribution of human activity to rising greenhouse gases also requires us to acknowledge our ingenuity can lead us to a just transition toward a low-carbon future,” says Delicia Nahman, director of sustainability.

It’s a rare opportunity to hear from the renowned writer.

“Robert is very well known in Britain and has quite a following,” says Anne Houston, dean of libraries. “He doesn’t do speaking events very often. He is thought of as an institution in environmental activism in Britain. His style of writing is also very distinctive and admired. At times, it’s a descriptive narrative, and at other times it’s deeply personal and impressionistic.”

He’s been places you haven’t.

Macfarlane is known to experience things himself. So in writing Underland, he ventured into hidden worlds: underground passages in Paris catacombs, a nuclear-waste deep geological repository site in Finland, Bronze Age burial chambers, and remote Arctic sea caves. “He explores all of these places personally and writes about them in such a descriptive manner that gives you a vivid sense of place,” Houston says. “This is an opportunity to learn something about places that most of us probably never would go. He has a lot of courage to go to these places, and you are able to live vicariously through his experiences.”

There’s something for everyone.

Macfarlane takes an interdisciplinary approach to his work. He writes about nature, but he weaves in lessons about history, culture, and ethics against a backdrop of travel and exploration. “Drawing together these different threads is what a liberal arts college does, and it’s what Lafayette does well,” Houston says. “Our interdisciplinary approach to problem solving is what is needed to solve the prescient challenge of climate change,” Nahman adds.

It continues the College’s celebration of Earth Month.

At Lafayette, students, faculty, and staff don’t celebrate just Earth Day. Events to honor the College’s commitment to sustainability occur throughout April. “Getting to hear one of the most widely read and prize-winning nature writers of our time speak about the environment is a really thoughtful way to conclude the College’s Earth Month. MacFarlane is really the perfect person to inspire us to think intently about the environment.”

About the Hatfield Lecture

The Hatfield Lecture series is sponsored by the Lafayette College libraries and endowed by a generous gift from John L. Hatfield ’67.

Macfarlane is the award-winning author of Underland, Mountains of the Mind, The Wild Places, The Old Ways, Landmarks, and The Lost Words. He is a fellow of Emmanuel College, Cambridge, and writes on environmentalism, literature, and travel for publications including the Guardian, the Sunday Times, and The New York Times.

Lafayette Recognized for Excellence in Sustainability