Prof. Mary Jo Lodge's new book combines the work of theater scholars and practitioners and musicologists who look at challenging issues within the production Twitter 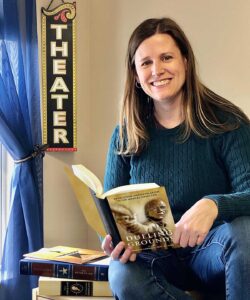 When the pitch for Hamilton was first released—a rap musical about America’s Founding Fathers—few could have predicted the phenomena it would become.

The musical was lauded for its casting diversity, radio-ready hip-hop, reinvention of the rules of theater, and creating a collective narrative of a nation. Its creator, Lin Manuel Miranda, did, however, utilize some dramatic licensing in rearranging historical fact and also failed to fully explore the roles of women and people of color in Hamilton’s time.

Mary Jo Lodge, associate professor of theater, explores the show’s varied uses of liminality in Dueling Grounds: Revolution and Revelation in the Musical Hamilton— a volume she contributed to and edited (with Paul R. Laird) that combines the work of theater scholars and practitioners and musicologists who look at challenging issues within the production. The book is being released May 4, 2021.

“I went to an international conference called ‘Song, Stage, and Screen,’ held in 2016 at CUNY in a room that overlooked the historic Hamilton Grange, and there were so many Hamilton papers. I spoke with a musicologist colleague who has published quite prolifically on Wicked, Paul Laird, about those papers, and that was the genesis of this book,” recalls Lodge. “We then put out a formal call for submissions after our proposal was accepted by Oxford University Press and were completely inundated with additional great papers. Once we picked 13 we thought worked the best together, we decided to unite them all with a focus on the liminality in Hamilton, where we examined how the show stood on the border of so many disparate elements. Hamilton is successful, in part, because it brings so many things together that didn’t seem like they should go together. How those things meet and interact is where the genius of Hamilton comes in.”

Lodge, who teaches musical theater history and enjoys working with her students to develop a chronological timeline of Broadway’s most important shows from each decade, notes that Hamilton’s central theme—rapping the story of America’s birth through the eyes of men who lived two centuries ago and had complicated relationships with slavery—sounds on paper like a terrible idea for a new musical. But the concept also had a lot going for it culturally, as Miranda wanted to show how previously marginalized people shouldered the responsibility and burden of American history.

“It is simultaneously very progressive in how it utilizes people of color almost exclusively in the cast, but there are actually no black characters in the show. It also manages to silence the voices of slaves, and it whitewashes Hamilton’s participation in slavery. Hamilton did own slaves, even though the play suggests that he did not,” Lodge points out. “The women in the show are also broken down into stereotypes and exist only in relationship with the men, even though the Schuyler sisters actually lived really interesting lives, independent of the men around them. There’s a lot to love about Hamilton, but there are also a lot of things to critique in it. We just wanted to make sure that while we celebrated those accomplishments and innovations the show was making, that we were also looking at what it is also not doing and what it is sweeping under the rug.”

Lodge notes that “one of the strengths of this collection is that it includes contributors from different disciplines.” Lodge, for instance, was able to co-write an essay for Dueling Grounds with Lafayette associate professor of economics Chris Ruebeck, where they examined how accurately and effectively the show depicts the economic innovations that Alexander Hamilton championed.

Other contributors to Dueling Grounds: Revolution and Revelation in the Musical Hamilton include:

Students took on the challenge of staging Emma! A Pop Musical