They met on College Hill but have traveled to Oregon, Wyoming, and South Dakota. Next stop: Washington, D.C. Twitter

Olivia Barney ’21 remembers the first time she met Ellie Aaberg ’21. At the start of their first year on campus, the two were due to meet in a faculty adviser’s office for their semester introductory meeting—and Aaberg was running late.

“As someone who’s particular about her time, I was a little annoyed,” laughs Barney.

The two went on to get to know each other better through their Intro to International Politics class, however, and that eventually led to a study group. Now, nearly four years later, they’ve been each other’s biggest support system through every aspect of their Lafayette education.

Ellie Aaberg ’21 and Olivia Barney ’21 at a Lafayette football game.

“I think it’s interesting to see how we can support each other. She’s a huge part of APO (Alpha Phi Omega service fraternity), and I’ve always tried to attend those events and support her,” says Barney. “I’m on the track team, and Ellie comes to many of my track meets. So the things that we’re not in together, we’ve tried to be there for each other.”

The two are jointly part of the Fellowship of Christian Athletes, which was founded during their first year, and have participated together in the ONE campaign, a grassroots advocacy organization of which Aaberg is the Lafayette chapter founder and president. But outside of that, the two are very much their own separate individuals and have never cohabitated on or off campus.

That all changes next month when the two move into an apartment together in Washington, D.C., to pursue their individual career paths. The new adventure will be next on a list of many preceding it, as they’ve spent some holidays together and have traveled across the country so that Aaberg could bring her car back to campus from her home in Oregon. 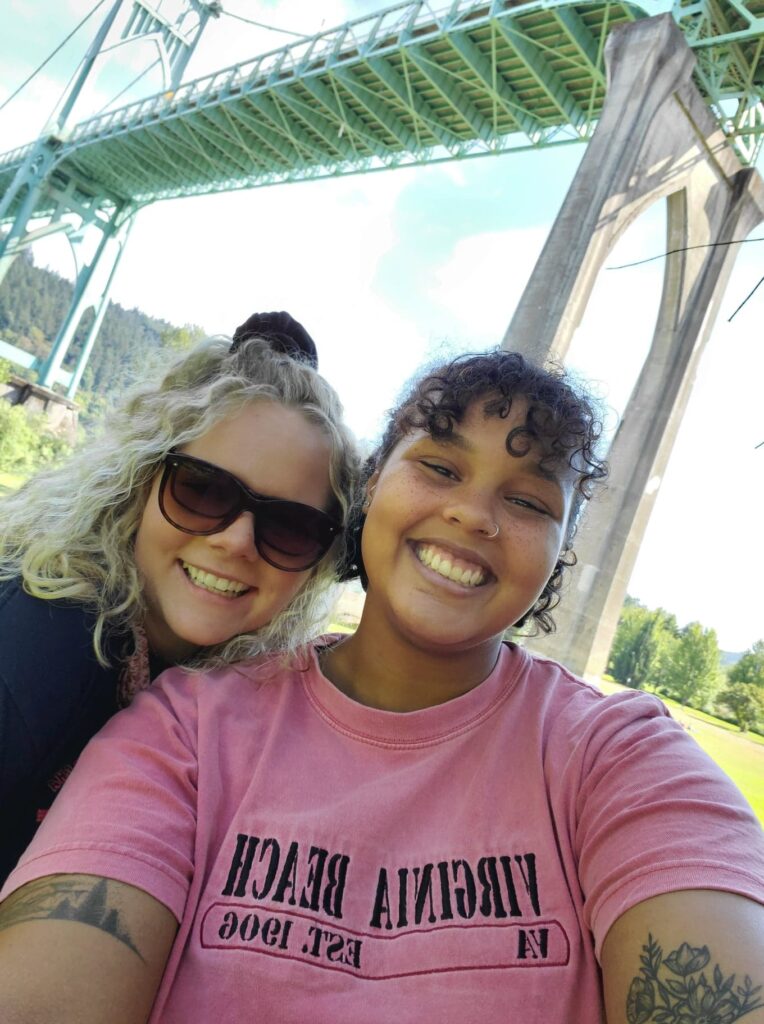 Ellie Aaberg ’21 and Olivia Barney ’21 during their travels.

“We stopped at Yellowstone, had a picnic, and then went swimming in a lake there. We were able to stop in Chicago. We ate out of the car every single day,” shares Aaberg.

“And we were able to stop at Mount Rushmore, and at Deadwood, South Dakota,” notes Barney. “That was summer of 2020, so we had to be really cautious. It was really interesting to see the different dynamics of the country related to COVID, and how people were behaving in each place.”

The two have experienced plenty of laughs along the way—from accidentally checking into an Airbnb on the wrong day, to Barney’s boyfriend and Aaberg acting out a video that Barney needed to do for a Spanish assignment—and are grateful to Lafayette for providing an atmosphere that has supported making new friends and nurturing those friendships.

“I’m going to miss being around people. There’s something really fun about walking from classes and seeing people you know, and going to the library or getting lunch with people because you’re both out and around campus for classes or activities,” says Aaberg. “I just like that no matter where you go, you can cross paths with someone you can connect with.”

“I’m a really structure-based person, and I think Lafayette offered me the opportunity to pack my schedule with as many things as possible that I’m really going to miss,” says Barney. “Hopefully we made our mark on this campus and on people on this campus.”