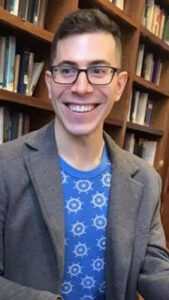 Heterosexual or homosexual. These are the two categories within which many contemporary Western societies place individuals with respect to sexual orientation, explained Matthew Andler, Lafayette’s Louise M. Olmsted Fellow for Ethics, during their recent lecture “Sexuality in Social Context.” In their commemorative wrap-up for the spring semester, Andler dedicated this year’s final campus address on behalf of the Olmstead Initiative and Department of Philosophy to exploring more inclusive practices that are reflective of today’s infinitely diverse population.

Even if the dominant scheme were to be improved by expanding to include the categories of bisexuality and asexuality, Andler explained, this still-inadequate method of categorization would fail to ascribe orientation to many queer individuals. And yet, entirely rejecting the concept of categorizing individuals with respect to their sexuality would also be a disservice, Andler argued, as it would prevent many LGBTQIA+ individuals from accessing supportive medical, governmental, and social resources. So, what would be the best way to categorize individuals with respect to their sexual orientation?

First, Andler explained, it’s important to differentiate between sex and gender. In simple terms, “sex” refers to male, female, or intersex physical anatomy, and “gender” refers to how an individual identifies themselves socially. Gender includes a variety of social identities, such as cisgender women and men (those who identify with the sex they were assigned at birth), transgender women and men (those with gender identities distinct from the genders they were assigned at birth), and genderqueer or nonbinary individuals (those who identify as neither woman nor man).

Andler proposed that, in order to be more inclusive of this wide spectrum of individuals as well as the people who are attracted to them, the socially dominant sexual orientation categorization scheme should be restructured into what they called a “queer categorization scheme.”

“This element of authority is precisely what provides space for transgender, genderqueer, and intersex individuals in the queer categorization scheme,” said Andler, “and no other philosophical account of orientation includes such an element of authority.” Because Andler’s proposal includes categories such as homosexual and bisexual, they argue that it is also instrumental to social programs that promote LGBTQIA+ health and well-being, such as public health initiatives and support groups involved in the treatment and prevention of HIV/AIDS.

Andler also explained that a flexible and inclusive categorization scheme is in the interest of LGBTQIA+ social movements. They noted, for example, that “asexual, bisexual, and homosexual individuals can promote LGBTQIA+ solidarity by collectively recognizing a shared oppression on the basis of non-heterosexuality. The queer categorization scheme,” Andler argues, “is conducive to recognizing such a shared oppression—and such a recognition plays a foundational role in sustaining queer spaces as well as energizing activist work in pursuit of gender and sexuality justice.”

A quote by cultural anthropologist, activist, and sex and gender politics theorist Gayle Rubin is what Andler used to close out their discussion: “Our categories are important. We cannot organize a social life, a political movement, or our individual identities and desires without them.”

Andler has published a number of papers at the intersection of ethics and social ontology, including work on gender identity, sexual orientation, and philosophical methodology. They are currently writing a series of papers exploring the structure and normative significance of masculinity.