Fifteen years later, the pages are being brought to life as Apple TV+ is midway through filming the small-screen limited series collaboration between producers Steven Spielberg and Tom Hanks. Production is taking place at Dalton Barracks near Abingdon, Oxfordshire, England, and also at Chalfont St Giles, Buckinghamshire.

Over the course of 10 episodes, the series will tell the legendary story of the American Eighth Air Force, a bomber unit put together shortly after Pearl Harbor and sent to bases in eastern England. The force had one supreme aim: to bring the German war economy to a stop through high-altitude strategic bombing. 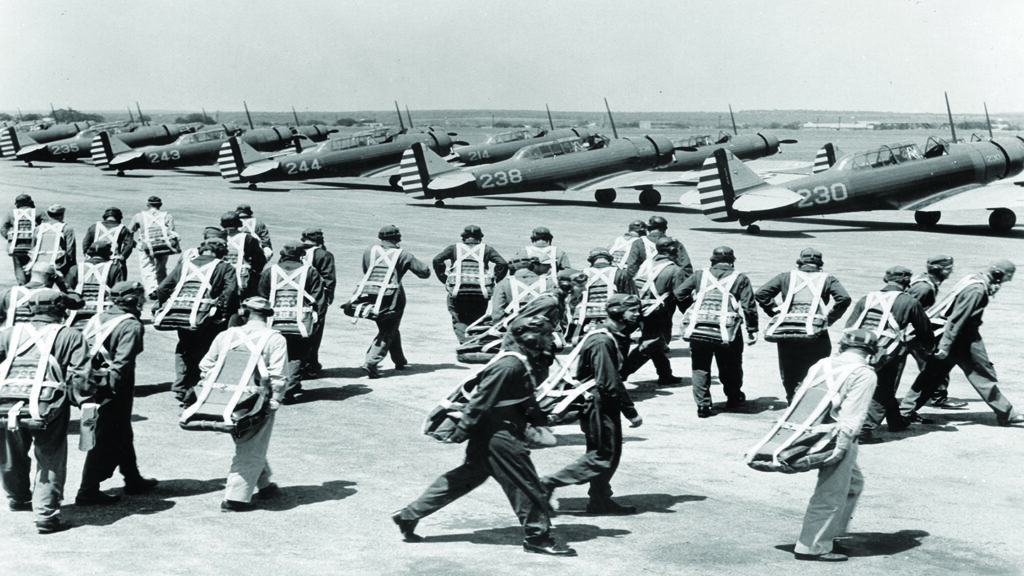 CBB9D8 Trainee pilots rush to their aircraft prior to a flight. Courtesy of Military Images/Alamy Stock.

To hear Miller tell it, the series will bring viewers right into the interior of the famed B-17—the plane known during WWII as the “flying fortress.”

“We’re filming a lot inside the plane, because a good part of the story is about men under fire, and how they hold up emotionally and physically. The plane is called a ‘flying fortress,’ because it’s a heavily armed war machine but once you get inside it you quickly realize you’re in a tight, thin-skinned aluminum tube—almost like a submarine—that’s highly vulnerable,” explains Miller. “Some of the episodes in the film take place entirely inside the plane during furious air battles. Others deal with life on base in rural England, survival inside German prison camps, airmen on leave in heavily bombed London, and Germans under the bombs in factories and cities inside the Reich.”

Miller notes that the dramatic, character-based series follows his book closely and that everything in the film actually happened, and every character is based on a real-life airman. “It’s blunt and highly realistic, and deals with war in a hard, pitiless manner. The bombers not only hit military installations, but kill thousands of civilians when the bombs stray from their targets in tightly packed cities. But the young bomber boys suffer horribly as well. They were flying what amounted to suicide missions. The American bomber force based in England lost more men than the entire Marine Corps lost in the savagely contested Pacific theater.

“Bombing was a blunt and bloody instrument, but it did eventually destroy the German war economy, cripple Hitler’s armed forces, and destroy his vaunted Air Force, allowing the Allied invasion force to land in Normandy on D-Day. The cost was heavy for both sides. Roughly 600,000 German civilians and a lot of innocent French and Belgian civilians were killed from the air. Bombing certainly didn’t win the war, but without it the war could not have been won, and a moral maniac would have stayed in power a lot longer and continued his genocidal war on people he considered unfit to live. Our film deals directly with these moral issues.

“The film will conclude with a forced march, in the middle of winter, of over 30,000 captured Allied airmen from prison camps in Eastern Europe to camps in Western Germany, out of the way of Soviet invaders heading for Berlin. The prisoners marched through the very cities they had bombed, and slept, on occasion, in Hitler’s death camps. The scenes depicting the marches were filmed during a Slovakian winter, but otherwise, the filming is being done entirely in England.”

With an estimated budget of over $250 million, Masters of the Air will be perhaps the most expensive TV series ever made. The film does not have a scheduled release date, but is anticipated for streaming in late 2022.