Prof. Dave Mante turned to his interests in broadcasting and video to make virtual learning more dynamic and interactive Twitter

With an interest in broadcasting and video since childhood, Mante, assistant professor of civil and environmental engineering, delivered remote class material last semester using a high-energy news anchor style format, engaging students as if they’d been tapped as subject area experts for a newscast.

“When I was teaching fully remotely during spring 2020, an acquaintance asked me ‘do you really think students are getting their money’s worth?’ It really hit me to the core,” he says. “I began thinking about ways where I could more effectively deliver classes to my students. I turned to one of my interests and developed what I called my media plan.”

Inspired and self-motivated, Mante dove into the world of livestreaming combined with virtual reality.

“When I was young, I was interested in video stuff. I had a video studio growing up in the basement and messed around with green screens back then,” he says. “I always had this passion. And this was a cool opportunity to combine it with something for Lafayette students.”

His planning took shape in a twofold approach.

“One was how to make remote classes something special by leveraging a dynamic atmosphere to keep students interacting and keep them accountable,” Mante says.

The other was how to take advantage of virtual reality technology to bring the lab work experience a little closer and make it as tactile as possible.

With support from Information Technology Services, the Communications Division, and the Civil and Environmental Engineering Department, Mante acquired affordable 3D cameras and other equipment to flesh out his news desk.

One challenge was how to overlay live feeds and talk to students while avoiding the appearance of wearing a headset—all without a producer behind the camera. For about $100, he bought news-anchor style earpieces and microphones and started outfitting his studio as he began troubleshooting and developing fluency with lighting, cameras, buttons, keyboards, and controllers. It’s a high-pressure solo act that requires instant coordination and fluid wrist and finger movements while presenting complex course material.

“I have one hand on a controller up here. And I have a remote computer keyboard down here and a computer and keyboard associated with that over here,” says Mante, whose office has been transformed into a brightly lit newsroom.

“I have a switcher with hidden buttons down below and then up top. I have everything,” he says. “I had a couple dry runs with colleagues at other schools. And then I was off to the races for first day of classes.” 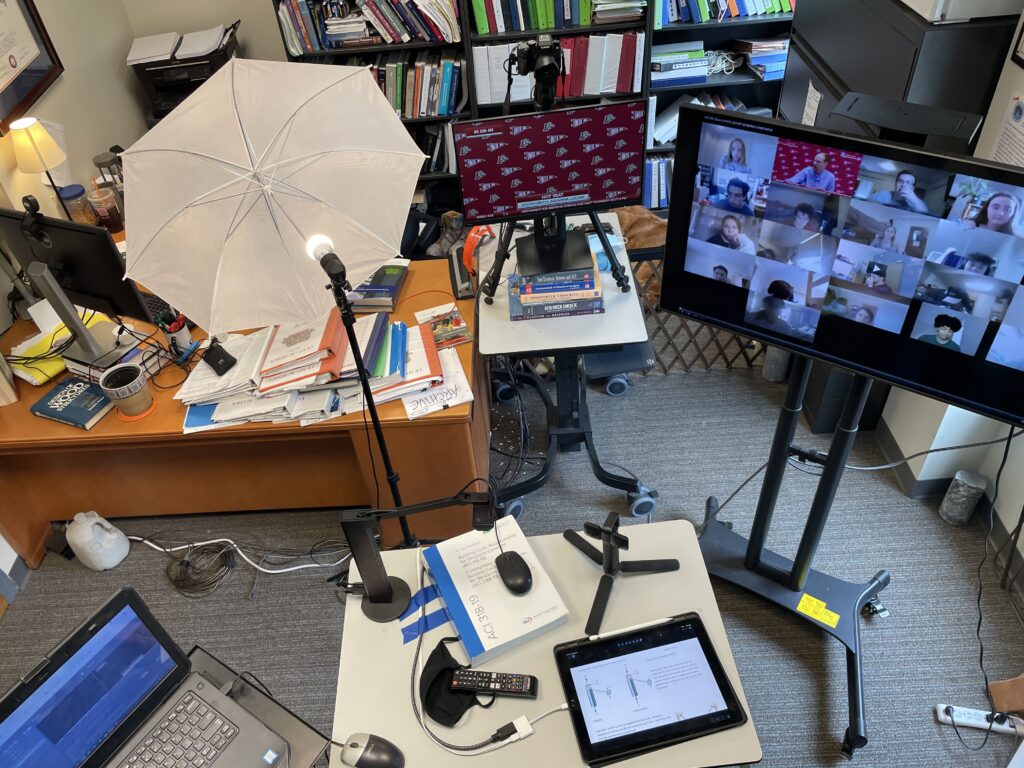 Prof. David Mante transformed his office into a studio

Headlines carrying reminders about assignments and deadlines scroll by on a red news ticker at bottom of screen. See the class in action.

Mante’s delivery is fast-paced and visceral and keeps students on their toes. Hitting a mute button or checking texts will not fly in this setup. There’s simply no place to hide.

For his reinforced concrete course last semester, he was able to generate about three hours of virtual lab experience. Google 3D glasses allowed students to step into the dusty, whirring world of concrete mixing. The only thing missing was the sweet, musty smell of curing concrete.

“It had cool features such as an informative newsreel at the bottom of the Zoom meeting that showed important dates and upcoming deadlines for assignments,” he adds. “He just had an amazing setup and interface to present the class that made it interactive and enjoyable for the students to learn.” 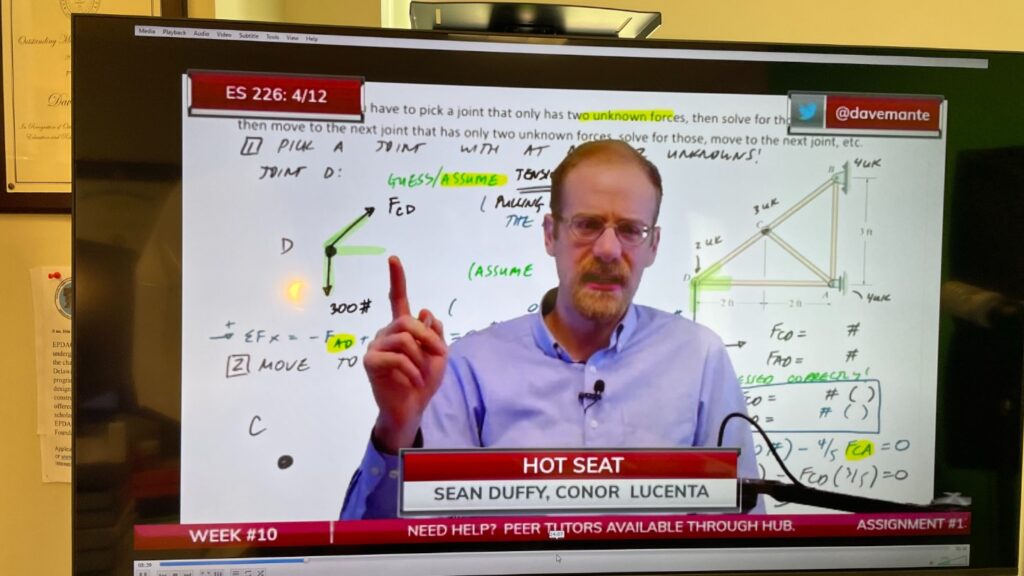 Zoey Hofmann ’22 (civil and environmental engineering and international studies) appreciated how Mante did everything in his creative repertoire to make virtual learning the best it could be.

“Out of all of my courses, concrete definitely was one of the few that felt somewhat close to normal,” she says. “I don’t think anything really can compare to the in-person experience in the lab, but the 3D videos Prof. Mante made showed us some of the things that we would have been doing if we had been in the lab this semester.”

It was fun to still see the lab and helpful in understanding the material learned in class, Hofmann says.

“The 3D videos took all the conceptual information we were discussing and showed us the way it is used and applied in the real world,” she says. “This connection was essential in getting a real understanding of the course material.”

One of the challenges with remote teaching is to make sure students are engaged and paying attention.

An advocate of cold calling in class, Mante came up with a “hot seat” segment on his newscast, where students names automatically appear on as a banner overlay—randomly switching every five minutes. When on the “hot seat,” students have to be ready to jump in when called upon to share critical information about an assignment, test, or deadline or share a piece of pertinent data related to the course material.

“You have to have your audio unmuted, there can’t be a delay in responding, and you can’t be getting a snack. You have to be there and ready to answer the questions when I ask them,” Mante says.

“You could almost call it role playing,” he adds. “Students on the hot seat have the responsibility to represent the class. It was a really neat way to keep everyone engaged and ensure questions asked in the chat log would be redirected to the instructor in real time.”

Mante valued the support he received from campus colleagues, including feedback from students in anonymous surveys. “There were definitely lessons learned all the way through the semester,” Mante says.

Even as instruction moves back into classroom and labs, the system Mante developed still has value. For example, if a class has to be canceled, instructional material can be prerecorded or livestreamed.

“You can now have either a synchronous or asynchronous class,” he says. “With a full TV studio, you have the opportunity to deliver class remotely if you need to. It’s been an enjoyable project with many implications for the future.”

More about this Major

Civil engineers are stewards of our natural resources and—using sustainable and ethical practices—design, construct, maintain, and improve the facilities, services, and systems that support modern society