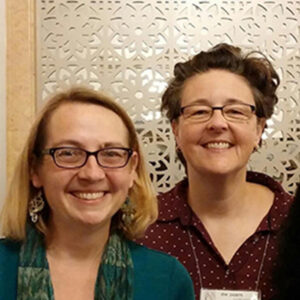 Jenn Rossmann, Baird Professor of Mechanical Engineering, and Mary Armstrong, Charles A. Dana Professor of Women’s, Gender, and Sexuality Studies and English, collaborated on a STEM studies paper that received multiple awards for excellence at the 2021 American Society for Engineering Conference (ASEE).

The multiple recognitions are a powerful endorsement of Rossmann and Armstrong’s interest in using academic research to further advance equity and inclusion in STEM disciplines, where there are still significant gaps in gender and racial representation. Their work falls within the mission of the College’s Daniel and Heidi Hanson ’91 Center for Inclusive STEM Education, of which Rossmann is co-director. 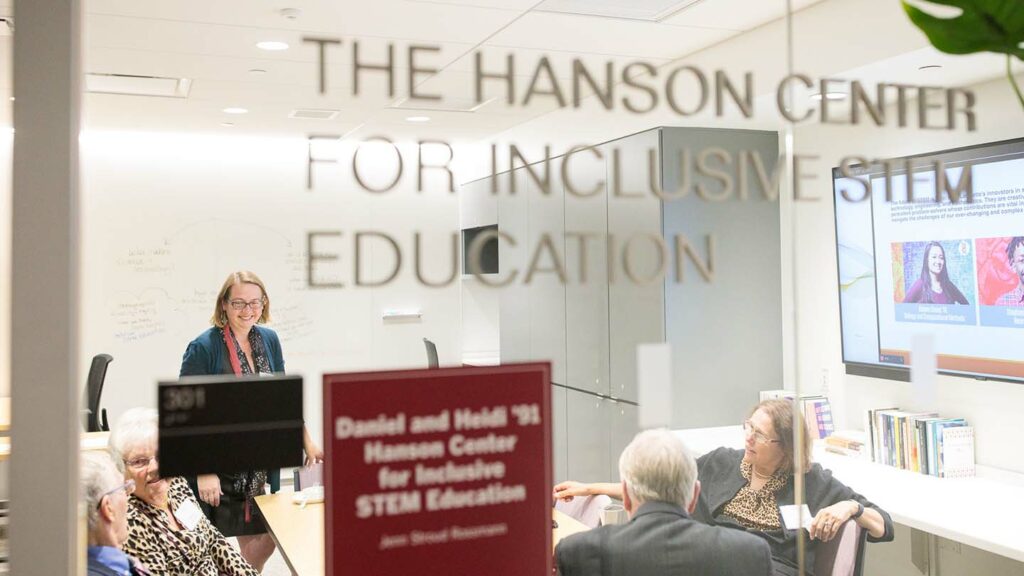 Jenn Rossmann, professor of mechanical engineering, in Hanson Center for Inclusive STEM Education at the opening of Rockwell Integrated Sciences Center in 2019.

Championing an inclusive campus culture and helping underrepresented students and faculty feel supported and empowered in classrooms and labs represent just a portion of their interests. Armstrong and Rossmann also are committed to advancing the interdisciplinary study of STEM as a social phenomenon. By viewing STEM histories and practices through multiple academic lenses, they strive to better understand how systemic inequalities have been embedded in STEM, and how such inequalities can be both exposed and addressed.

As part of this work, Rossmann and Armstrong hypothesized that underrepresented engineering students could benefit from the content taught in women and gender studies (WGS), a field that provides students with the knowledge, tools, and a vocabulary to understand intertwined and asymmetrical systems of identity, power, and privilege.

Rossmann and Armstrong’s ASEE paper focused on better understanding this trend. They collected data from engineering students who elected to take WGS 250: Gender and STEM, a course created and taught by Armstrong. The goal was to identify if that course enhanced engineering students’ (particularly underrepresented students’) sense of confidence and belonging within the engineering community, which has a deep history of being centered in white masculinity.

“Engineering students are really enculturated in this myth that engineering is an objective and neutral body of knowledge, and that it’s ok not to worry about the impacts that knowledge may have on a society, and that it’s not a concern that so often engineering teams lack diversity,” says Rossmann. “I think when they take Gender and STEM they realize, oh, no, it’s in fact hugely problematic that, for example, crash-test dummies only come in one size, the average male. That has impacts. For female engineering students, in particular, sharing this knowledge is really empowering. It enhances their engineering education and can become a valuable part of their own engineering identity.”

Indeed, student participants reported that the WGS course increased their awareness of systemic biases and processes, and enhanced their senses of both confidence and agency. Students indicated that the course strengthened their sense of belonging in engineering and empowered them to support peers experiencing marginalization. Several recommended the course be required for all engineering students.

Armstrong designed Gender and STEM to be interdisciplinary and to engage students in the study of what science and engineering do, not only who participates in these fields.

“It’s a very calculated course. In the beginning, we don’t focus on issues associated with being a woman in STEM,” Armstrong says. “Instead, we read about the languages, cultures, and histories of biology, neuroscience, physics, and technology. We peel back the curtain of neutrality and talk about how science and engineering have always had a gender, a race, a sexuality.

“A lot of times, the biggest mistakes made in science are because of assumptions and blind spots around race and gender. The course is a critical exploration of  how diversity intersects with the quality of science—and not just who is doing it, but  the thing itself. That’s eye-opening  for students: they often think, ‘Well, STEM is always correct, how do I fix me?’” WGS 250 pushes against that.

This particular collaboration is a glimpse of what’s to come. Rossmann and Armstrong have a larger, more comprehensive paper currently under review. Their current work delves further into the data they have collected and aims to more deeply explore the productive impact WGS classes might have on STEM inclusivity and on the experiences of underrepresented STEM students.