Thorpe, who died 20 years ago in Tower 2 of the World Trade Center, helped establish a soup kitchen in downtown Easton and a Haitian outreach program during his time at Lafayette Twitter

To his friends and family, Eric “Rick” Thorpe ’89 will always be remembered for his athleticism, his gregarious personality and infectious sense of humor, and, above all, his selfless, giving nature. 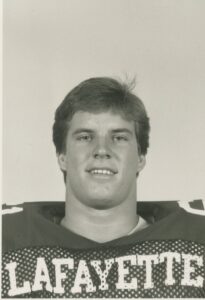 It was perhaps his quieter side that was most endearing, a part of him that drove a desire to help others. That yearning to give back fully matured at Lafayette where Thorpe stepped up to help establish a soup kitchen in downtown Easton and a Haitian outreach program.

After Lafayette, he established a successful financial career in Manhattan and joined Big Brothers and other philanthropic programs in New York City. Never shy about making conversation with strangers, Thorpe always took the time to stop and talk with the homeless, always volunteering a mood-lifting smile.

For Thorpe’s family, the passing decades have done little to heal the loss of Rick, who died 20 years ago in Tower 2 of the World Trade Center where he worked as a vice president at Keefe, Bruyette & Woods Inc.

But Ray Thorpe, Rick’s father, takes solace that his son’s memory and selfless spirit of helping others live on through a nonprofit organization to help children cope with grief and personal loss as well as a Lafayette College community service endowment created by Eric Thorpe’s classmates.

“He was a giving person,” says Ray Thorpe. “He was just self-motivated in everything he did. The guy had a big heart.”

Clearly a family trait, the spirit of giving back drove the elder Thorpe, despite his own grief, with help from his son’s friends, to establish Rick’s Place in 2007. The organization helps grieving children, families, and caregivers in western Massachusetts, where Eric grew up, find comfort and resilience and grow stronger while dealing with the loss of a loved one.

Thinking often about Rick’s daughter and his granddaughter, Alexis, who was just 15 months old in September 2001, Thorpe says he was inspired to initiate Rick’s Place, which this year is helping 20 families and 31 youths manage their grief and loss through on-site and virtual programming. Hundreds have been served since Rick’s Place was founded.

“And so, in thinking about my own granddaughter, the idea came about of how to create a grieving program for children,” Ray Thorpe says. “That was the genesis of Rick’s Place. I know it’s something Rick would be proud of and support.

“Kids show up. They’ve lost a brother, or a mom or dad, or an aunt or an uncle, and they’re all quite sad,” he adds. “Well, now they go into a room, and there are 10 kids sitting there, and they’re all sad. But it gives them all an opportunity to be safe and guarded in their conversations or their feelings. And they express themselves.” 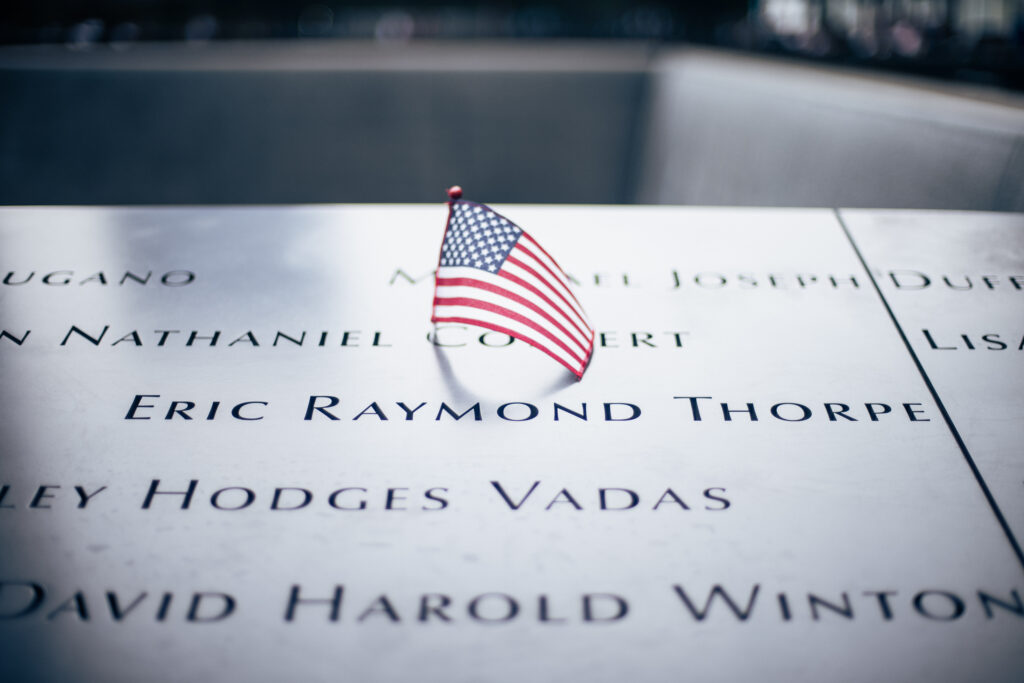 Thorpe says the services of Rick’s Place have expanded over the years to bring programs to children and families who can’t travel and provide professional educational programs for teachers, to raise their awareness of what grieving children experience.

The organization is a reflection of Rick Thorpe, who came to Lafayette to study business and economics, and participate in sports. He played football, served as a captain of the varsity lacrosse team, and enjoyed making friends, establishing enduring relationships, and quietly performing charitable work off campus and out of the limelight.

“The telling thing is the fact that, because of Rick’s involvement in many activities at Lafayette, it brought out his personality and developed his skills and interests, particularly in nonathletic areas,” Ray Thorpe says. “Socializing with friends and connecting and empathizing with people of all stations in life, that was important to him.”

Nurtured at Lafayette, Eric Thorpe’s desire to help others manifested itself in the unshakable bond he developed with the Rev. Tom Hagan, former Catholic chaplain at Lafayette, according to his father and friends. Hagan founded the humanitarian organization Hands Together in 1986 after a group of Lafayette students, including Thorpe, traveled to Haiti to help the poor there.

“Rick, whenever he encountered the very poor or homeless men and women, he always had a horizontal relationship with them. He never looked down on them but really considered each of them as if they were his lifelong friend,” says Hagan, who first worked with Thorpe on establishing a soup kitchen at Third Street Alliance for Women & Children in Easton.

“Rick would spend a good deal of his time preparing the hot meal for Saturday,” Hagan recalls.

Thorpe should be honored and most remembered for being one of the original founders of Hands Together, which serves the very poor of Haiti, he adds. It serves the poorest of the poor in the poorest areas of Haiti, supporting 14 free schools (Haiti has no free public education) and feeding as many as 30,000 people a day.

“What Rick was most passionate about was trying to secure fresh water for the people,” Hagan says. “Back when Rick was a student, no one would have ever imagined that today his dream has become a wonderful reality, with over 750,000 drinking fresh water every day.”

Lara Culley Mullen ’89 and other classmates knew their friend, who could quickly fill a room with laughter and devote that same kind of energy to assist those in need, deserved a memorial befitting of a life well lived.

“And we talked about the things that were important to Rick— Haiti, the soup kitchen—and came up with the idea of setting up this community outreach fund,” she says. “We just started calling people who cared about Rick and what he did here, and they started giving money.”

Appropriately, the memorial fund supports the meal service at Third Street Alliance for Women & Children, where Thorpe first started his volunteer work with Hagan; it also provides scholarships to students who are interested in leadership training for alternative spring breaks, a standing program at Lafayette that addresses poverty and hunger. Since the fund was established, more than $170,000 has been contributed in Thorpe’s memory.

“Here you have this state championship football player who is very smart, confident, outgoing, and everything seemed so easy for him. But yet, in his upbringing, something was instilled in him to give back,’ says Tom Gillan ’89, who helped establish the memorial fund and remained close friends with Thorpe after college.

“On a Sunday morning, when we were all sleeping after a long night, he would get up and go downtown and serve food to the homeless,” he says. “That would have been the furthest thing from our minds being 18- and 19-year-olds. At that age, most kids would never think of extending themselves to others like that.

“And, you know, when everybody went to Fort Lauderdale, or wherever they were going for spring break, Rick went down to Haiti with Father Tom (Hagan),” says Gillan, who still remembers his first encounter with his friend at a first-year party.

“He was loud, handsome, a big strapping dude, a talented athlete,” he says. “Everybody circled around him, all the girls wanted to talk to him, and all the guys wanted to get near him and laugh with him. No one could believe he was a freshman. We all asked, ‘Who is that guy?’ He just commanded the whole room.”

“Whether it was at a party, in a class, or just a walk across the Quad, his personality was larger than life,” Mullen says. “He was just fun to be around. He was loud—that gets mentioned a lot—but it was funny loud. And it was, you know, that personality that I think connected him to Father Tom.”

Hagan, who remains close with the Thorpe family, says Thorpe’s daughter often asks him to tell her about her father.

“He was a very funny person. For instance, he asked me one day if he could borrow my black clerical collar and jacket. I had no idea why he needed it. I thought maybe for some costume party,” he says. “It turned out it was his dress for a formal reunion of his prep school. He dressed as a priest, and he would travel to New York City in my clerical garb. He spent the entire weekend dressed as a priest. Needless to say, he had hundreds of hilarious stories of people thinking he was a young Catholic priest.

“Rick had this wonderful dry sense of humor,” Hagan adds. “He certainly made me laugh. But underneath that, he was extremely sensitive to the needs of others. I still miss him.”

On Sept. 11, Gillan plans to be with his closest Lafayette friends in Manhattan, likely outdoors somewhere, and toast his friend.

“He’d be there, slapping backs and talking about Rick’s Place and how there’s a great need to help kids who have lost a parent,” he says, taking a pause to collect his thoughts. “He’d be talking up the need to do other community outreach. Rick would probably say, jokingly, ‘Why didn’t we do any of this sooner?’ ”

Mullen shared a similar thought about what Thorpe would express now.

“I know that he would be flattered by Rick’s Place and the outreach at Lafayette,” she says. “But at the same time, it would be more like, ‘Hey, yeah, that’s all great. But let’s go do something else, something more.’”

Ray Thorpe says he’s gratified by the energy and devotion of his son’s friends from Lafayette and beyond in establishing the memorial fund and Rick’s Place.

“It’s confirmation of who Rick was, coming from his friends,” he says. “It’s a positive thing, a lasting memory and part of his legacy.”