Here’s the assignment: Take anything from popular culture and reimagine it as musical theater. Then write a treatment for your show and pitch it to the class.

Such is the origin for Ian Owens ’11’s debut musical, Tall Green Plumber, which opens the second week of September at Wilkes-Barre’s Little Theater.

The assignment came in Mary Jo Lodge’s Introduction to Musical Theater course. Owens’ love of theater began in high school. As a chemical engineering major at Lafayette, he took every free elective he could on stage as well as being a member of the Marquis Players. 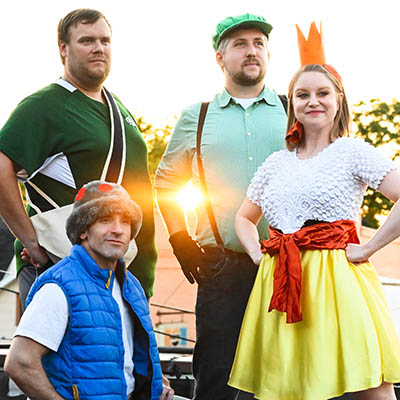 When first given the assignment, Owens worked on a musical version of Rudy, the inspiring story of a Notre Dame football player. Days before the assignment was due, inspiration struck. He wanted to make a musical based on a video game.

Tall Green Plumber was born, based on the Nintendo smash Super Mario Bros.

He wrote a new treatment and practiced his pitch on his theater-loving sister and close friend Mike Wawrzynek. They loved it.

Owens and Wawrzynek soon wrote a song for it.

Then they couldn’t let it go.

Wawrzynek, who majored in theater at Elizabethtown College, used the treatment for his senior capstone project.

For it, the pair created a whole first act—book, lyrics, and music.

Of course, their peers thought it was a joke, but later shook their heads in amazement when the lights came up. It not only worked, it was brilliant.

The story follows standard video game tropes with a bad guy stealing a princess and unlikely heroes working to rescue her. Owens and Wawrzynek bend those tropes with twists and surprises.

They composed 21 original songs for the production.

It became their COVID-19 project after the theater in Wilkes-Barre approached them a year ago and commissioned the musical for its 99th season. Owens, who lives in South Philadelphia and works at Linde, using that ChemE degree, dedicated all of his downtime to the show.

His wife, Megan, loves what he is doing and is supportive of all it demands.

Currently, the show is in final rehearsals, so Owens has moved back home to his parent’s house in Hazleton. He works remotely during the day and at night is helping the show get on its feet.

The director, cast, and crew have been phenomenal at helping make adjustments and bringing it to life.

“The set is up, the costumes done, the props in place, we just need to run final tech before we welcome an audience,” says Owens.

“It has been 10 years of work, probably six rewrites of the script, and hours of notation and orchestration,” he says.

Owens and Wawrzynek feel confident they have created something that will appeal to gamers and theater lovers, bringing both out for a nostalgic romp in a theatrical space.

The show runs for two weeks.

“It just takes one person to see it or get their hands on it for us to bring this to more people or bigger venues,” Owens says.

In video game speak, a magic mushroom appears that transforms a character into something bigger and unstoppable.

Photo credits: Angel Berlane Mulcahy with On My Cue Photography