Chip Nataro, Marshall R. Metzgar Professor and head of chemistry, was awarded the 2022 American Chemical Society (ACS) Award for Research at an Undergraduate Institution. The award was announced in September’s Chemical & Engineering News, though Nataro will travel to San Diego, California, in March 2022 to accept the honor and present an award address in person.

The ACS Award for Research at an Undergraduate Institution was established in 1986, and honors a chemistry faculty member whose research in an undergraduate setting has achieved wide recognition and contributed significantly to chemistry and to the professional development of undergraduate students. Research Corp., which sponsors the award, also will provide a $5,000 grant to Lafayette that will be used to fund additional research students working in Nataro’s laboratory. 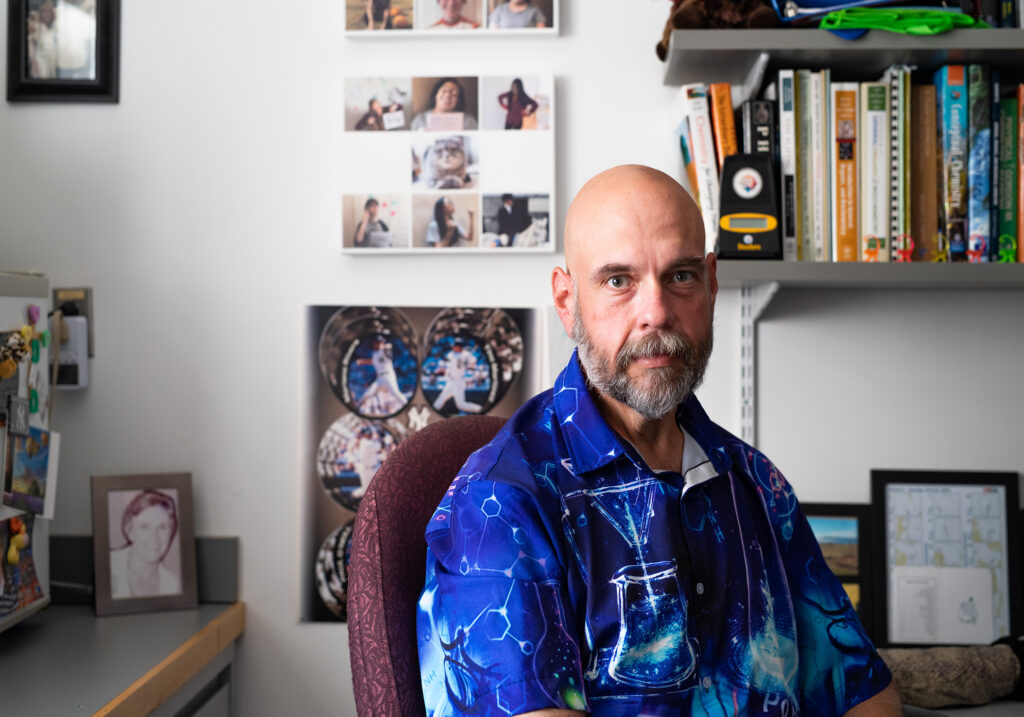 With Nataro’s selection, Lafayette joins University of Richmond, Franklin & Marshall College, Furman University, and Harvey Mudd College as the only chemistry programs to have more than one faculty member receive the award. (Lafayette’s Prof. Joseph Sherma was named in 1995.)

“My research is all in the hands of my students. They’re the ones who carry it forward, take us in new directions, and find new things. Ultimately, my goal for the research is to create new compounds and to test whether they are effective in a variety of different applications. The students continue to find answers but also keep raising more questions—which allows us to keep doing what we’re doing,” says Nataro, who was completely surprised by the award selection. “It’s like going into the kitchen without a recipe to work with. The fun part is, when a student makes something new, I get to tell them, ‘Be careful with that vial you’ve collected. It’s a substance that’s never been made before.’ All of my research students have had a hand in this award, and they all deserve equal amounts of credit for what we’ve been able to accomplish.”

Having students back in the classroom full time is a thrill for Nataro, who sees their time in his lab as a step toward the next stage of their careers.

“We do good science here. I just love finding answers to questions while also creating new questions, trying to answer them, explaining what we’re discovering, and sometimes scratching our heads at what we discover. It’s nice to realize that other people have realized the extent of the work we’ve put in,” he says. “The award is a very nice honor. My colleagues and collaborators have also been important contributors in many different ways. Funding from ACS and NSF (National Science Foundation) has also been critical to our success.”

Learn More About This Major

Students explore the nature of the physical world, the problems facing a technological society, and the philosophy, methods, and limitations of science.