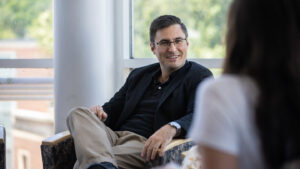 Since joining Lafayette’s faculty in 2011, Hines has accumulated over $1.2 million in research funding to further his study of the complex interaction between proteins—research that could eventually lead to effective treatments for diseases like Parkinson’s and Alzheimer’s.

During his NIH grant cycles, he and his students have uncovered important findings about the fundamental molecular processes that underlie these disorders. They have actively shared their findings with the wider scientific community, authoring 14  journal articles on the subject with more papers underway.

In the lab, they study yeast proteins. Proteins, which are linear strings of amino acids, usually fold spontaneously without issue into their final structure. But sometimes they twist into a disordered form and clump together, which prevents them from functioning properly. This is called aggregating, and it can cause brain damage.

There is a special group of proteins called “chaperones” that can fragment aggregates. Hines has been studying the interaction between chaperones and a specific group of misfolded proteins, known as prions, in yeast since 2007, when he was a postdoctoral researcher at University of Wisconsin. The grant support has enabled him to continue this work at Lafayette, where he and his student researchers have made important new discoveries about the function of these chaperones.

“In particular, we are very interested in a group of chaperones called J proteins. We’ve identified that specific J proteins are particularly good at interacting with and eliminating the aggregates. This current grant is going to fund some additional work in this area,” Hines says. “The hope is that someday, once we understand the pathology of these diseases, we might be able to have effective treatments.”

Learn more about this major

Students explore the nature of the physical world, the problems facing a technological society, and the philosophy, methods, and limitations of science.