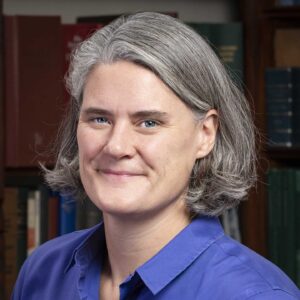 Kira Lawrence, John H. Markle Professor of Geology and department head, collaborated with an international team of scientists to develop a tool that will help paleoclimate scientists fill in gaps in the geologic record and make new discoveries about Earth’s climate in the past.

Reconstructing past climate conditions enables scientists to better understand how Earth will react to increasing levels of carbon dioxide in the atmosphere.

Lawrence’s research team was invited to share their findings with a global community in EOS, a prestigious science news magazine published by the American Geophysical Union. Their article, “Navigating Miocene Ocean Temperatures for Insights into the Future,” was published Oct. 5.

Lawrence is a paleoclimatologist whose work has mostly focused on the Pliocene epoch (5.3 to 2.6 million years ago), a period that is of particular interest due to its status as the most recent interval of sustained warmth in Earth’s history. There is less data about the period that preceded it, the Miocene epoch, which was warmer yet than the Pliocene and, given the ongoing climb of atmospheric carbon dioxide level, represents a potential analog for the near-term future.

Working with a team of colleagues at the Bolin Centre for Climate Research at Stockholm University and Cardiff University in the United Kingdom for more than a year, Lawrence created the Miocene Temperature Portal, a tool that collates key information about Miocene sea surface temperature records. The portal enables researchers to rapidly locate and evaluate data, which then helps them conduct research. This, in turn, helps the broader paleoclimate community by adding missing pieces to the geological record in the form of new data and new studies that leverage existing datasets.

“This is a community effort to provide an important resource that will enable scientists to develop a global picture of the Earth’s history during this specific interval of time,” Lawrence says. “Understanding how Earth’s climate system worked during  past warm times is important to understanding climate change today and to preparing for the future.”

The team determined that developing a portal would be a valuable way to serve the broader paleoclimate community. Paleoclimate scientists can add new data as it’s published, so the tool will remain relevant and increasingly useful over time.