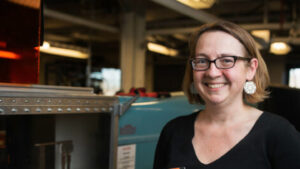 An upcoming talk by Profs. Jenn Rossmann and Benjamin Cohen may have you thinking more deeply before checking texts and social media next time you’re parked at a clanging railroad crossing, waiting for a train to pass.

They will discuss their co-authored paper, “The Internet Is Railroads,” at 4 p.m. Oct. 22, offering a look at how the transcontinental railroad corridor, now the host of data hubs and fiber optic cable, shaped the modern internet and is an example of structural racism. The lecture will be presented virtually via Zoom (learn more).

“The transcontinental railroad provided a framework for the modern internet,” says Rossmann, professor of mechanical engineering. “In fact, the telecommunications industry has many echoes of the railroad system. Internet data centers are often in locations that used to be train depots.”

Rossmann and Cohen also will talk about how an overemphasis on “disruptive” and “novel” tech neglects deep history whose artifacts are still present.

“Bringing that history to light reveals patterns of exploitation and exclusion that we can still see in modern apps like facial recognition,” notes Rossmann. She and Cohen describe racial biases and inequity deeply embedded in transportation and communication systems.

The lecture, part of the Olmsted Series on Race and Racial Justice, is sponsored by the Department of Philosophy, Engineering Studies Program, Hanson Center for Inclusive STEM Education, and Lafayette Forum on Technology and the Liberal Arts.