Members of Steel Battalion focus on leadership, decision-making, and doing "the right thing even when no one is watching" Twitter

In 1826 when the College’s charter was adopted, military science was one of the subjects to be taught. From 1917 to 1919 normal operations at the College ceased as World War I prompted the creation of Camp Lafayette, a training ground for recruits and draftees in all branches of the military.

ROTC, established at the College in 1919 following an Allied victory, was mandatory for all freshmen and sophomores from 1951 to 1966.

By the 1990s, the number of ROTC members had shrunk, and the unit was closed. Since then, all cadets serve as part of the Steel Battalion, hosted by Lehigh University and joined by students from DeSales, Moravian, Muhlenberg, Penn State Berks, and Kutztown. 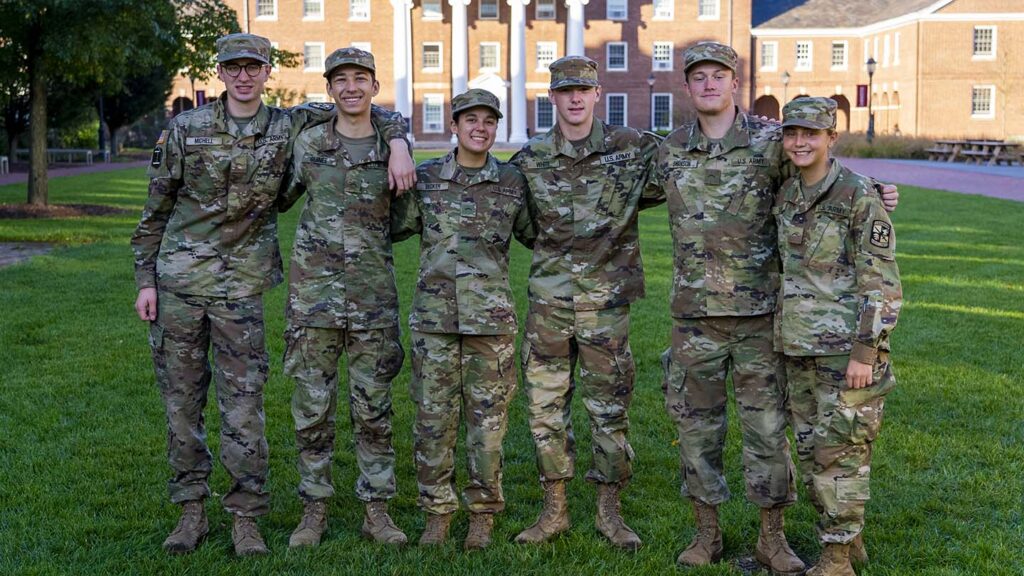 After Lafayette, each cadet has an eight-year commitment but may serve longer.

“One of the strengths of our battalion is the range of cultures, backgrounds, and educational interests,” says Jackson. “With 26 new cadets in our company of 109 from across all of the colleges and universities, there is not one type of cadet.”

“We focus on leadership, decision-making, and mentorship with a motto of ‘For the Cadets, By the Cadets,’” he says. “We seek to emphasize the skills they need and the integrity that should drive their actions—to do the right thing even when no one is watching.”

Meet the first-year cadets you will see in fatigues (Army combat uniform) on campus this semester. 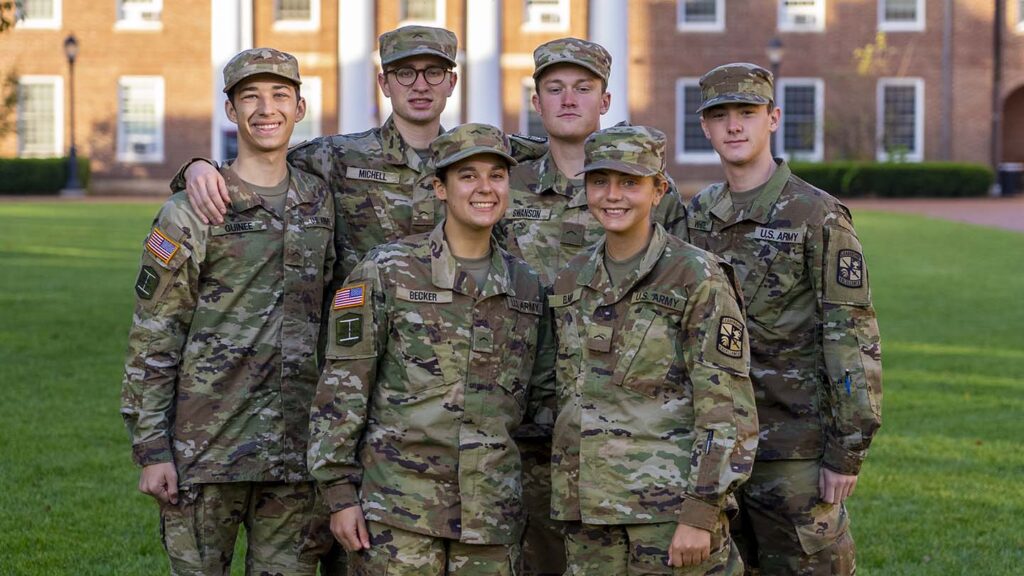 Samantha “Sam” Becker ’25 | Huntingdon Valley, Pa.
Potential major: Biochemistry
“I wanted a smaller school that had good academics, a swim team, and ROTC. Lafayette provided the best balance of all three while still prioritizing academics. I do not come from a large military family like some cadets, but I knew I wanted to serve one day. The leadership development, structure, camaraderie, and high standards drew me to ROTC. One day I will be leading and in charge of enlisted soldiers, so I hope I can learn as much as possible during my time in ROTC to be a well-respected and competent leader for them. The greatest opportunity for me is getting to meet so many incredible people with similar goals to myself and the chance to be mentored by current military members. The greatest strength has to be the people and camaraderie of this organization. Every person I have met so far have been incredibly supportive and genuinely nice people. The Steel Battalion is so successful because of this camaraderie and sense of family among the cadets and cadre.”

Joseph White ’25 | Bryn Mawr, Pa.
Potential major: Computer science
“I chose Lafayette because of its excellent academic reputation. My three older brothers attended the College and enlightened me on how unique their experiences were, which also encouraged me to enroll. Ever since I was a kid, I always wanted to be in the military and fly planes, so now that I have the opportunity, I want to take advantage of it. I like being a leader and participating in community service, so being a part of an organization that promotes that is important to me.”

Emma Elmen ’25 | St. James, N.Y.
Potential major: Government and law.
“I chose Lafayette because of its community. I love the small class sizes and how everything is super personal. It has always been my dream to serve and give back to my country. My dad, uncle, and cousin were all in the Army ROTC, so my family also inspired me. They have always supported my goals and helped me along the path to accomplishing them. ROTC can help me learn how to be a great leader both in and out of the Army. The greatest strength of the Steel Battalion is the support that everyone gives each other. I always feel like there is someone to go to if I need help or if I have questions on anything.”

Aiden Michell ’25 | Jenkintown, Pa.
Potential major: Chemical engineering
“Lafayette has a great engineering and ROTC program and an amazing campus. My aunt and uncle both were in ROTC. I always planned to serve my country, and ROTC ended up being a good compromise between service and education. I hope to go active duty but am not sure what branch yet, possibly engineers or infantry. The greatest strength of the Steel Battalion is our esprit de corps.”

Jim Guinee ’25 | Howell, N.J.
Potential major: Government and law
“Lafayette students and alumni all have great passion for the school, which is tied to Lafayette’s primary focus on both rigorous academics and a tight-knit community. My grandfather was in the Air Force and would always share his stories from the military. This led me to do a lot of research over the past six years, and the military became a profession where I saw myself truly thriving. I hope to use lessons from my major, from the core curriculum, and from all my experiences at Lafayette to be a more effective leader for soldiers. Our training opportunities in ROTC are world class for preparing us to become leaders of character. I’m really excited for advanced camp (going into senior year), and other summer military schools. In addition, the Army has an outstanding internship program with nearly all sectors of the government, and I hope to take as much utilization of the Army’s programs as possible. The Steel Battalion is the most dedicated and bonded team of cadets nationwide. We will train for every possible scenario so that we are prepared for whatever comes our way.”

Lucas Swanson ’25 | Stroudsburg, Pa.
Potential major: History
“I chose Lafayette because it was both close enough to home that I was familiar with the area and far enough away that I was able to make my own choices and lead my life freely. The strength of the academics and the opportunity to play club baseball also were deciding factors. I was inspired to join ROTC because it was the perfect combination of Army training and college life. I wanted to train to be in the military while also maintaining a college experience. Two things that are drilled into us quickly are discipline and responsibility, and I believe those traits will serve me well as life lessons and in my college career. The amount of knowledge I need to absorb and turn into habit is a bit daunting. The greatest strength of the Steel Battalion is that we have leaders in our cadre who truly want to shape us into the best soldiers we can be, and an excited, motivated group of cadets who look out for each other and are very close.”

Military science cadets have dedicated themselves to serve