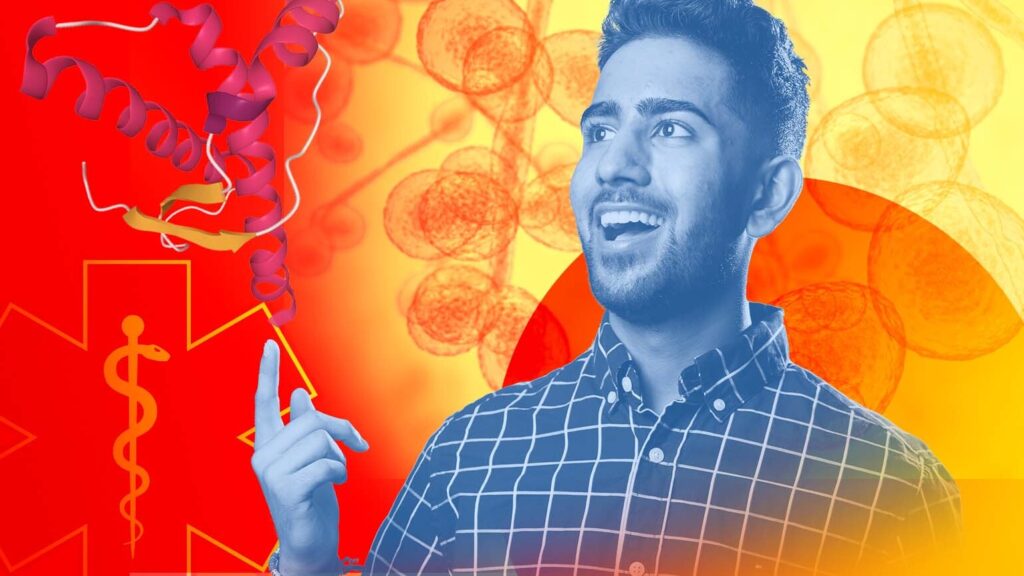 As a first-generation college student planning to pursue an M.D.-Ph.D. after graduation, Harshil Bhavsar ’23 dreams of not only treating patients with neurodegenerative diseases like Alzheimer’s and Parkinson’s, but also working to find cures through impactful scientific research.

And he’s already making headway with his goals: This past summer, Bhavsar participated in Weill-Cornell’s Gateways to the Laboratory Summer Program, during which he studied potential ways to diagnose Alzheimer’s in patients early on based on their metabolic and brain structure differences.

“I looked at MRI scans of different patients and studied how the volume of a region [in the brain] known as the mammillary bodies in the hypothalamus changes as the disease worsens,” Bhavsar says. “There are also other issues, like hormonal imbalances, that can occur from hypothalamic dysfunction. So, looking at other aspects of Alzheimer’s that may not be so common could help us better understand and identify it.”

Since the fall 2020 semester, Bhavsar also has been conducting research alongside Justin Hines, associate professor of chemistry, studying infectious proteins called “prions” in yeast—the properties of which, due to their similarity to protein formations in neurodegenerative diseases, could potentially help shed light on better treatments for conditions like Alzheimer’s.

“Harshil is an incredibly driven student with a strong work ethic,” Hines says. “He donates his time to numerous causes and is dedicated to bettering himself with the goal of improving the health and education of others.”

Bhavsar’s time outside of the research lab is devoted to his two other passions: teaching and patient care. The Marquis Scholar is a certified EMT with the Easton Emergency Squad, has mentored first-generation juniors and seniors at Easton Area High School as the program coordinator through Lafayette’s Landis Center for Community Engagement, and has worked as a substitute teacher at his high school during last year’s winter break. Most recently, he was awarded the Eugene P. Chase Phi Beta Kappa Prize for demonstrating scholarship during his first two years at Lafayette.