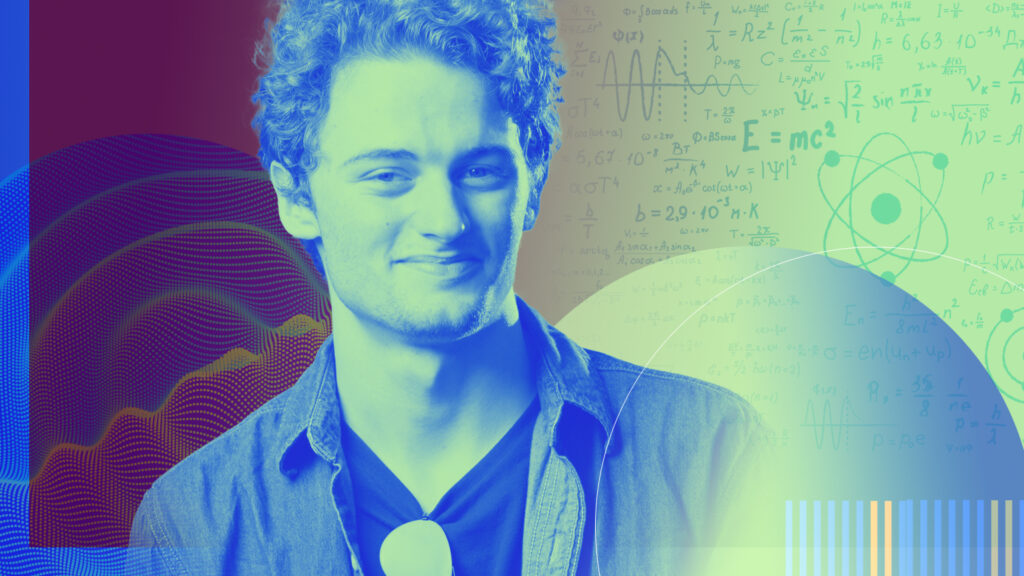 Evan Braasch ’22, physics major, has pursued physics education despite not having a structured “physics education” program at Lafayette. He plans to teach, but is also interested in social and political issues.

Evan Braasch ’22 says that in the three-plus years he’s been at Lafayette, he’s changed as a person—thanks, in part, to being able to piece together the education he wants.

That process has involved experience, clarity, and a bit of thinking outside the box.

Despite Lafayette’s lack of a structured physics education program, Braasch and his peers Amelia Reilly ’22 and Carlito Maca ’22 have all taken the initiative and found opportunities to pursue their passions for both physics and teaching. Initially, Braasch arrived at Lafayette intending to study mechanical engineering, but later got his feet wet with physics and engineering studies (a more interdisciplinary form of the engineering program) and decided to make the switch. His collective experiences over the past several years have inspired him to a goal of one day becoming a high school physics teacher.

Those experiences also have created a lot of self-awareness. On top of his physics and engineering curriculum, he began taking courses in education and educational psychology, which taught him that while much of society may believe that they can stop learning at some point, education—particularly where science and research are involved—is a never-ending process.

“The whole point of science is that we don’t know everything,” says Braasch. “I never want to stop learning, but at the end of the day my goal is to develop enough of an understanding of the world to make something out of it, to do something with that information.”

Braasch also worked with Maca to create a podcast about science education, and spends time working as a supplemental instructor in the Physics Department. Tutoring, he says, is an interesting process for him because he, too, often feels like he doesn’t have everything figured out. The opportunity to work with others who may feel a little lost is a way for him to ease both his own stressors and someone else’s.

“I want to help people learn how to integrate by parts, for example, but I also want them to feel OK about not knowing how to do it right away,” Braasch explains. “It can be really hard for people when they get a bad grade on a test or when they’re just struggling in a course. For a lot of people here it’s the first time they’ve really struggled academically. But when they do ultimately solve a difficult problem, that’s an empowering feeling.” Braasch started peer-to-peer tutoring his first-year spring, and has been working to help other students ever since.

“One thing that I have always admired about Evan is his quiet enthusiasm for understanding. He isn’t the loudest person in the room, but he isn’t afraid to ask questions and really dig into something when my argument isn’t quite clear. Having him as a student has helped me refine the way I talk about physics,” says Zoe Boekelheide, associate professor of physics. “He has a really unassuming presence, but he isn’t afraid to advocate for his intellectual interests. Last year, the Physics Department brought in an outside speaker who is an expert in physics education. (Trevor Ian Smith from Rowan University spoke at a very well-attended virtual colloquium Oct. 19, 2020.) I give Evan a lot of the credit for advocating (in the most polite way possible) to make this event happen.”

Braasch says his plans for the foreseeable future include becoming a high school physics teacher, though he also envisions himself eventually attending graduate school to study education policy. During his time at Lafayette, he has become much more interested in social and political issues, and has developed a keen awareness of how all humans are part of political systems.

“There’s no escaping that. There’s no staying ‘neutral’ or staying out of things. Everything is shaped by the biases of people,” he acknowledges. “I used to consider myself an apolitical person, but during my time here, that’s been flipped on its head. Instead of trying to avoid difficult conversations, I now see how important it is to tackle them head on. And I do appreciate how easy Lafayette has made it for me to consider more than just equations and figure that out.”