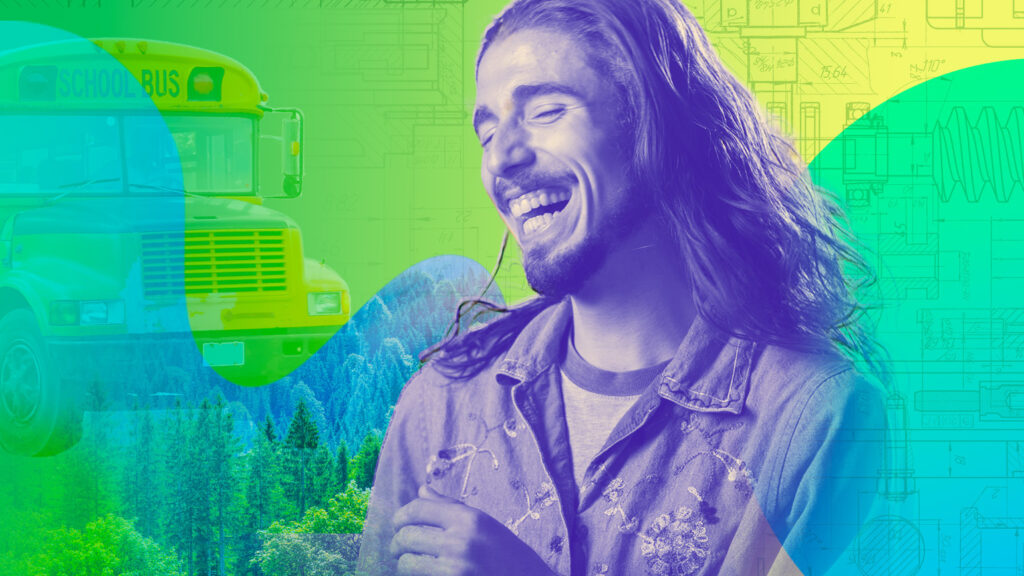 Remy Oktay ’24 has already accomplished two major life goals he set for himself – take a gap year before entering college and convert a used vehicle into a livable space.

Oktay, majoring in engineering studies and environmental studies, went all in on his second goal, converting a retired upstate New York school district school bus into a tiny house on wheels. He installed solar panels on its roof to power appliances and electronics in a bold display of resourcefulness, sustainability, and imagination.

He took his gap year when COVID-19 hit and poured his energies into the bus project.

“It was summertime, and it was becoming apparent that school was going to be online. I said to my parents, ‘I don’t want to do online classes,’” Oktay recalls. “I said to myself, why not work on the bus project and stay safe from COVID? It was a good use of my time, a far out idea that I’ve always wanted to do and make happen.”

So where do you find a school bus?

Oktay bought his bus last fall from New York Bus Sales, a bus dealership in Chittenango, N.Y., which sells traded-in school buses that are in excellent condition and are, on average, 10 years old. Even his older sister, Chloe, joined the fun and renovated her own school bus.

Installing the commercial-grade solar array on the roof provided the real challenge.

“They’re really big, about 8 feet by 4 feet wide. And they’re meant to be mounted on flat surfaces, not a curved bus roof,” Oktay says. “It’s a very serious issue in terms of geometry, because you have to get two flat planes to intersect with the curved roof in a way that is structurally sound and can withstand the lifting force generated by traveling down the highway.”

Eventually, he found the right hinges and mounting rails, and machined a series of aluminum brackets and bolted them together.

Delicia Nahman, director of sustainability, has been impressed by Oktay’s work.

“Remy is a shining example of what it means to be a Pard. His creativity, critical thinking skills, and passion to address the prescient challenge of climate change is why I have hope in the future,” she says. “Remy’s insightful reflections and desire to enact change by using his degree to help solve the climate crisis is inspirational.”

“It was an experiential learning process,” says Oktay, adding that he and his sister like to joke that they both bought their first vehicle and house at the same time. “It taught us how changing designs work and how that process flows. But it’s also about owning something, paying for it yourself, and really feeling invested in it.”