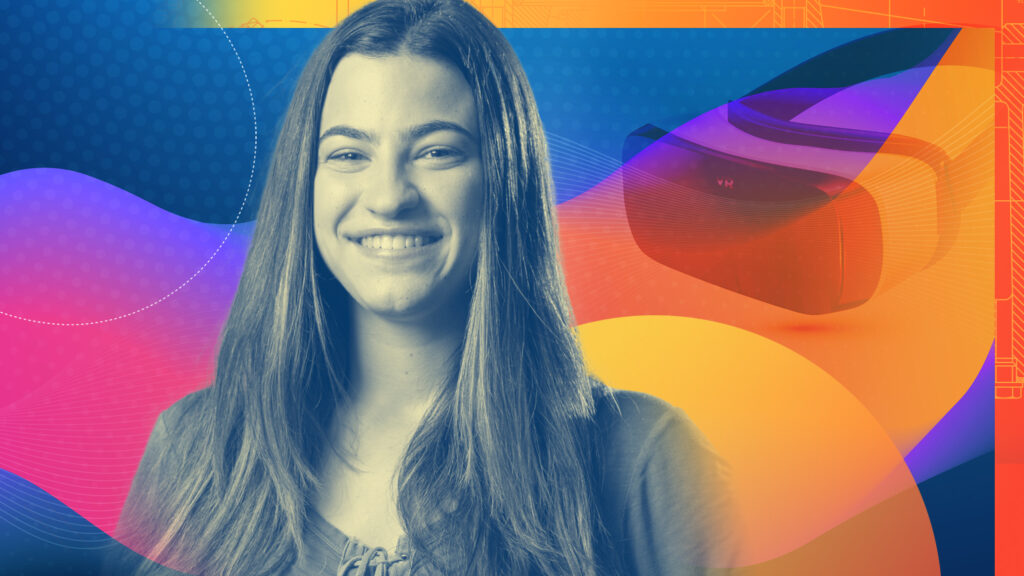 Recent studies suggest that Americans exercised less during the height of the pandemic, but a research project by Alexa Gould ’23 and Prof. Christian López may help get sedentary people moving again.

Gould and López have been working on an innovative way to promote physical activity by developing a virtual reality exergame. Wearing a VR headset, viewers physically respond to obstacles coming toward them, and with the use of depth-sensor technology, they can control an avatar in the virtual environment.

An evolving project, it began during López’s Ph.D. research and involved another Lafayette student who made it VR. Gould has worked this semester to add more obstacles and other elements.

“Obesity has become a big health problem in the U.S.; that’s what motivated this project. It’s designed to promote physical activity to get people moving,” says Gould, who took Introduction to Engineering with López her first year and started working with him on the VR project this semester as a part of the Clare Boothe Luce scholarship program. She is considering a career with a construction management firm to combine her interests in mechanical engineering and architecture.

“It’s just such a great thing to be able to have technology like this, which can benefit our health,” she adds. “Visualizing yourself in this VR game environment helps with motivation. It’s also cool to see how we can apply code to the actual game to make things move.”

The simulation also may have potential to provide physical therapy and help people recovering from medical conditions like stroke.

“Virtual reality headsets are often seen as video games. But there’s much more potential. There’s some hope here to help people get their mobility back,” Gould says. “The game does not require intense physical activity, but in this virtual environment the obstacles have you ducking down and moving side to side. So it could help as a physical therapy tool. It’s been exciting to make improvements to the game and expand its potential.”

Throughout the project, López, assistant professor of computer science with an affiliation in mechanical engineering, says Gould “has shown great perseverance and problem-solving and self-learning skills, since she has learned a new program and familiarized herself with a whole set of codes and programs by herself with minimal guidance.”