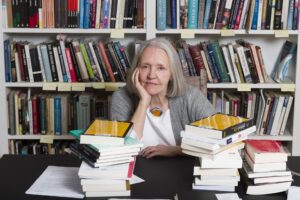 Saskia Sassen—prominent author, editor, and Robert S. Lynd Professor of Sociology and co-chair of the Committee on Global Thought at Columbia University—will deliver a virtual guest lecture to the Lafayette community Nov. 18 at 7 p.m.

The event, which is titled “Global Cities, 30 Years On,” is presented by the Class of ’61 International Speakers Series. The International Affairs Program is resuming this series, which took a brief hiatus in 2020 due to the COVID-19 pandemic.

Here are four reasons why this is an event you shouldn’t miss:

Sassen is the world-renowned expert who popularized the term ‘global city.’

A sociologist revered in fields across the social sciences, Sassen has defined debates about the role of cities in a globalized world for 30 years. This year, she is celebrating the 30th anniversary of the publication of her book The Global City: New York, London, Tokyo, a groundbreaking investigation of the connections that take place between cities as a result of globalization.

Sassen has authored or edited more than 10 books and dozens of articles on cities, migration, globalization, and many other topics. She holds a Ph.D. from University of Notre Dame and has been awarded over a dozen honorary doctorate degrees, alongside numerous prestigious recognitions for exemplary contributions to social science.

“This is an opportunity to hear from, and interact with, someone who is at the top of the field on this,” says Caleb Gallemore, assistant professor of international affairs. “She has a very strong interdisciplinary understanding of the pressures that face large cities and the people who live in them in the contemporary environment.”

You’ll get an insider’s look at the past, present, and future of cities around the world.

A retrospective on the idea of global cities since Sassen first analyzed them 30 years ago, this lecture will not only focus on how the dynamics of the world’s most heavily populated urban areas have evolved, made a lasting impact, and intertwined with one another in an increasingly globalized world over the last few decades, but also give a glimpse at what cities might look like in a post-COVID world.

“Sassen thinks really hard and creatively about one of the biggest social transformations that has taken place in the past couple hundred years,” says Gallemore. “After the Industrial Revolution, probably the biggest thing taking place in terms of changing the way humans live is urbanization. A lot of times in social science and other disciplines, we—for methodological reasons or otherwise—act like humans are more or less evenly distributed across countries, and that isn’t true. There are a lot of things that change about our way of life as a result of urbanization; and this process, as far as we know, is just going to be continuing in the future.”

Cities are critical to the global economy.

“Cities are way more important than they’re often given credit for,” Gallemore continues. “Starting in 2008, over 50% of the population of the planet lives in cities. That’s something that is unprecedented in human history, and it’s a massive transformation in the way people live, the way economies are organized, and the way politics play out.”

Gallemore explains that, in the social sciences, data is often collected in terms of states or countries, but a closer look should be taken at the cities within them.

“For the people who live in these cities, the things their municipal governments are doing probably have as big an effect on their day-to-day lives as the things that the national government does. And cities are connected in ways that are different from the ways countries are connected,” Gallemore says. “Cities are like living creatures. They have nice restaurants or whatever, but we often don’t think about all the forces that go into making a city what it is. I hope that people come away from this lecture thinking about and realizing that cities are really complex, intricate, and interesting things that we shouldn’t take for granted.”

Sassen’s lecture is presented in conjunction with Lafayette’s Global Cities Initiative, which was launched spring 2021 by Lafayette’s Global Education and Research Advisory Council. The two-year multidisciplinary program focuses classroom and scholarly investigations on global cities, and it aims to create, connect, and publicize teaching and scholarship under the sub-themes of pandemics, power, production, and peripheries.

Be sure to also check out “Hiroshige’s ‘Tōkaidō Road’ Series: Works from the Allentown Museum of Art,” a public exhibition and lecture delivered by Ingrid Furniss, associate professor of art history and acting head of Asian Studies Program, Nov. 17, as part of the Global Cities Initiative.