A teal ice cream cart sits outside Skillman Library. A lightbox sits on top of the cart, and a camera is mounted above it.

A man approaches in a matching teal shirt and shorts. He pulls a sheet of drawing paper from a pad and asks viewers to draw a single line: the border between the U.S. and Mexico. 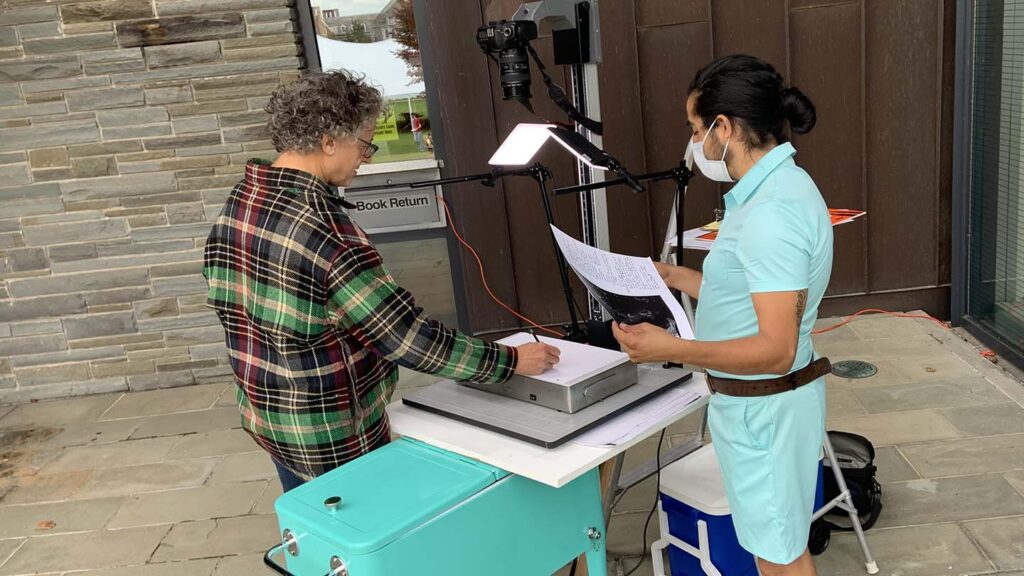 Most people, as they hold the pencil, seem to be searching the recesses of their minds for an image of the map. While the border has been a much debated topic in popular culture over the last few years, the actual twists and turns of this dividing line are far less concrete than the abstractions around it.

As the participants ready their pencils, the man ascends a ladder, hits record on the camera, and then descends in order to read passages from the work of Gloria Anzaldúa, a Chicana scholar who has called the border “una herida abierta,” an open wound.

When finished, Rojas opens the ice cream cart and rewards participants with a homemade frozen treat, a tepache popsicle.

Trying to make that border more tangible is Emilio Rojas, an artist who works in film, photography, poetry, sculpture, installation, and live performance.

“He is a prolific creator who uses a variety of materials, media, and methods,” says Rico Reyes, director of galleries and curator of collections at Lafayette.

The College presented the first survey of his work, which explores the intersection of borderlands, memories, and politics. Called tracing a wound through my body, the pieces were on display in the Richard A. and Rissa W. Grossman Gallery at the Williams Visual Arts Building, Williams Center for the Arts, and other locations across the Lafayette campus. 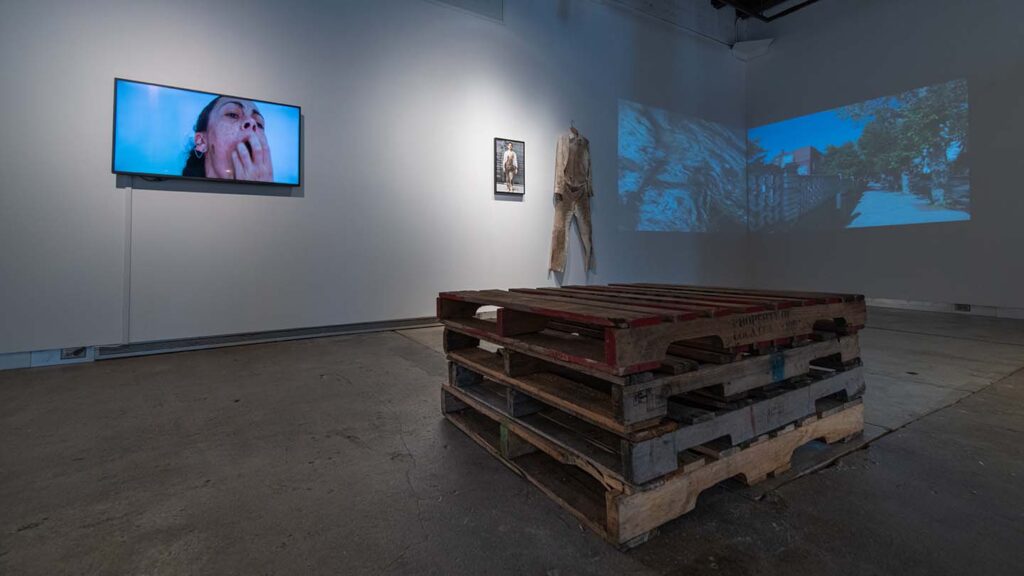 Like his activation of his border drawing work at Skillman Library, Rojas activated other parts of his exhibits, offered lectures, and took his work into the Easton community.

On a Friday night in Easton’s West Ward, as the Red Rovers football team could be heard in the distance along with the high school marching band, Rojas collaborated with a local tattoo artist.

Rather than ink, Rojas worked in blood, as Victor Nieto from Famous Tattoo Works opened an inkless scar of the U.S.-Mexico border on Rojas’ back. 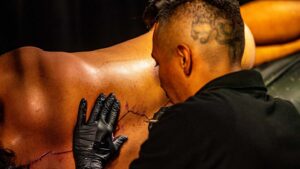 Victor Nieto from Famous Tattoo Works opened an inkless scar of the U.S.-Mexico border on Rojas’ back.

“It is important that his work be seen because he is an artist who produces current, provocative work of the highest caliber across a range of media and practices,” says Nestor Gil, associate professor of art. “To be wholly present for this work is an act of considerable risk because to be so present is to expose oneself to profound feeling, which is dangerous business.”

“His focused investigation on the history, politics, culture of the border region is an endless font of artistic inquiry,” says Reyes. “From an artistic perspective, especially for a young artist still on campus, it’s a great engagement with someone who is making work and exploring his creative limits.” 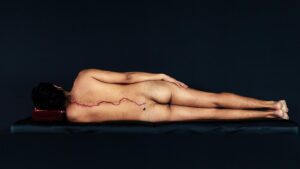 A blood line of the US-Mexico border was tattooed into Rojas’ back.

This is where Anastasiia Shakhurina ’22 enters. She began working with Rojas in May as a Creative and Performing Arts (CaPA) fellow, assisting with pieces and installations. “It was amazing to be behind the scenes with him,” she says. “It helped me care more deeply about my own art as I heard him talk about the details, process, and benefits to viewers.”

This attention to detail was seen in his lecture where, again, Rojas used his body as an instrument to understand traumas. During his lecture, on a table before him sat two onions, eight cherry tomatoes, a bag of ground achiote, and a glass of brown water. His lecture discussed themes like desire, wounds, healing, and exclusion, and combined original poetry, images on screen, and consumption, like eating a whole raw onion.

“Emilio is a deeply sensitive thinker whose work in any medium resonates as poetry to me,” says Gil.

To see Rojas’ works and really experience the breadth of his artistic practice, visit https://galleries.lafayette.edu/ for more information.