In November, Leanna Deegan ’22 became the first Lafayette women’s volleyball player in program history to capture the Patriot League Player of the Year honors. An area native who once balanced three sports at Easton Area High School, Deegan made her decision to singularly focus on volleyball late in the game—but over four years, that focus paid off.

“Leanna has defined what it means to truly lead by example,” says Ryan Adams, women’s volleyball head coach. “Her success and accolades are a true testament of the hard work she puts into everything she does. Leanna values learning, growing, and getting better, and the accompaniments are a byproduct of trusting that process. She will definitely walk away from this program knowing that she’s left the Lafayette College volleyball program better than she found it.”

Here, we get to know the civil engineering major and learn how team camaraderie and the friendships she developed on campus helped to shape her Lafayette experience. 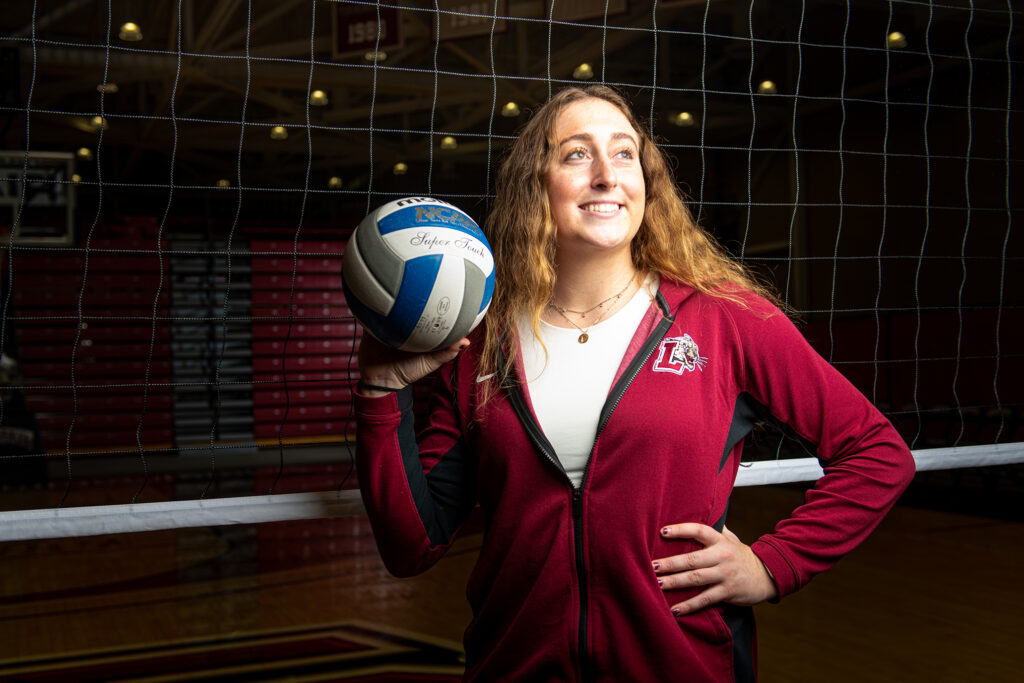 Women’s volleyball senior outside hitter; first ever in team history to be named the Patriot League Player of the Year for 2021; finished her senior season with 472 kills on 1,165 total attacks and was the NCAA Division 1 national leader in kills per set with 5.76; she also had 180 digs, 24 blocks, and 17 service aces, and finished her Lafayette career with 1,221 kills; named to the Patriot League Academic Honor Roll.

Member of Engineers Without Borders (EWB), volunteers with projects on campus and in the greater Easton community; peer mentor for civil engineering students in sophomore and junior years.

ENDING UP IN A MAJOR THAT SUITS HER

“Lafayette is known for being a great engineering school. When I first started here, I thought I wanted to go into electrical and computer engineering, because I was interested in the computer science aspect of it. I discovered that program wasn’t for me, so after a year, I changed my major to civil engineering. I discovered that I like building physical things and not just building computer code. In civil engineering, there’s a physical product that’s the outcome of the work you put in. I also enjoy the focus on the environment and sustainability.”

“It’s become easier for me to balance my athletics and academics because of the way our volleyball schedule is structured. Between my first year and now, I’ve definitely learned a lot about time management. It used to be that I spent most of my time in Acopian, where I would be for hours on end at night. Now, if I’m not out of Acopian by 10 p.m., that means it was a stressful day.”

“It’s been a crazy ride, especially with the group of seniors we had this year. We came in freshman year together, and I think we went 0 and 16 in the Patriot League and didn’t win one single game. Even starting this season, we were ranked second to last. We kind of had a little chip on our shoulder, like we had something to prove. But it’s been super fun. With the awards and stuff, I wouldn’t have gotten those without my team. All of them have been super supportive, and all the seniors are really proud of what we accomplished throughout the years. We hope that our legacy will improve the program for future years.”

“All of my professors have been really supportive throughout my time here. A lot of them have always emailed me or reached out when they saw things published [about volleyball]. I’m going to miss that connection, as well as the people and the friends I’ve made across campus. Not only did I get close with my team, but I made a lot of friends in civil engineering. Everyone shaped my experience in some way and helped me grow as a person.”

WHAT THE FUTURE HOLDS

“Because of the impact that the pandemic had on last year’s volleyball season, all seniors get an extra year of eligibility. So, if I choose to, I can take a fifth year and go play somewhere else. I’m at the point where I’m deciding between that and working toward my master’s degree. At some point in the future, after I’ve finished my schooling, I’d like to go into construction or project management.”

Driven in the Classroom and on the Court