Throughout her 27-year career with ESPN, Beth Mowins ’89 has helped break the glass ceiling for female broadcasters and women working to break into the field. She was the first woman to call a national NFL broadcast on the network in 2017. Now, following in the footsteps of her colleague Doris Burke (who was the first woman to work as an in-game NBA analyst during the ’17-’18 season), Mowins has become the first woman to call play-by-play for a regular season game on ESPN. She was in the booth for the Dec. 3 game between the Philadelphia 76ers and Atlanta Hawks.

Here, Mowins, who once captained Lafayette’s women’s basketball team, sits down with us for a catch-up Q&A and shares her thoughts on the thrill she still gets in the booth, what she still wants to accomplish in her career, and the connection she still feels to her Lafayette family. 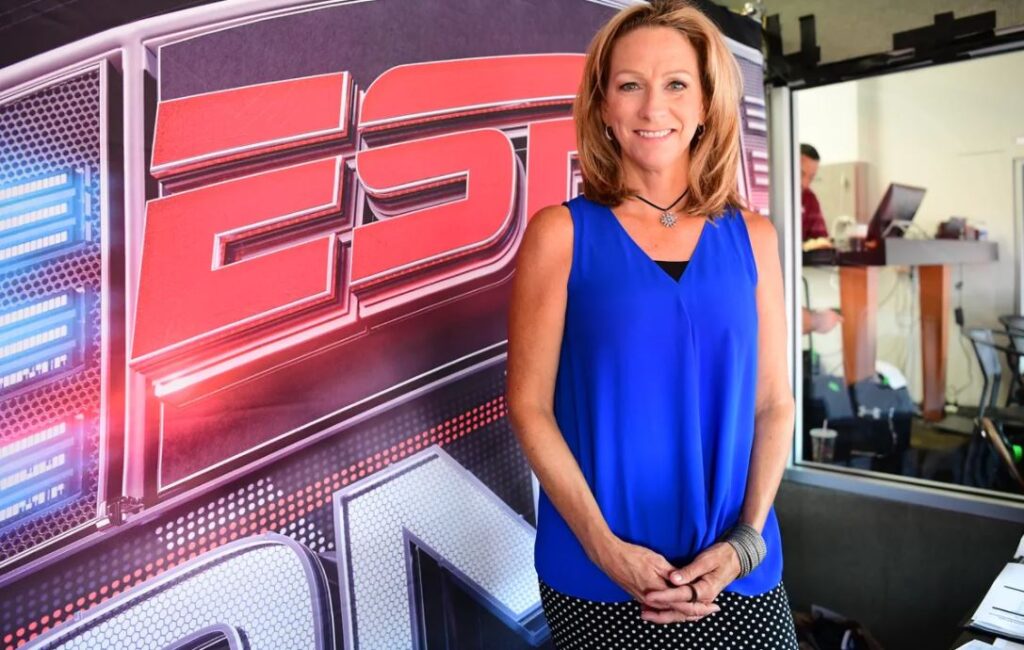 Q: Thinking about all you’ve accomplished in your career, it still has to be a thrill to get to be the first woman to call an NBA game on ESPN. How do you feel about opening up the door for the next woman to be able to do that?

A: Over the years, I have really come to appreciate not only the opportunity to do something that I love to do so much, but knowing how much it does impact other women. Whether it’s in this industry or not, any little kid out there with a dream should know that you can chase it and put in the work, and hopefully good things will happen. It’s great to have the opportunity to call games like that, but then also afterward to see the impact that you’ve had and how positive it is for a lot of people. It can be a pretty cool side effect and residual of all of this, for sure.

A: My dad was a high school basketball coach, my mom was a huge sports fan, and I had three brothers. My whole world kind of revolved around sports as a kid, and that’s actually one of the reasons why I was drawn to the play-by-play role. Analysts tend to stick to whatever sport they played or coached, where they were the star of that sport. But the nice thing about the play-by- play role is we get to jump around to all kinds of different sports. I love the versatility of the job and the hard work that goes into preparing for a football game one week and then a basketball game the next week. It’s a lot of fun to take a deeper dive into whatever sport you’re covering and to get a good feel for what’s happening—not only with the two teams in this instance, which were Philly and Atlanta—but also around the conference and then around the league. Plus, sitting courtside in the arena is just fabulous.

Q: Do you still get any nervous energy before a game starts?

A: There’s definitely an adrenaline rush. It’s almost similar to what it was like when I was playing. You definitely get excited about feeling the energy of the arena and the fans, and enjoying and appreciating the enthusiasm and passion that the players have for the game. So you kind of take all of that in and hopefully find the words to describe it, and to paint the picture of what that atmosphere is like for the people watching at home.

Q: Do you have a favorite broadcasting moment in your career or one that really stands out?

A: I’ve been lucky over the years to have a lot of fabulous moments. I kind of focus on what has been the most recent, so certainly that NBA game and to be able to work with a legendary broadcaster like Jeff Van Gundy, and Cassidy Hubbarth and our whole crew. That was a pretty neat moment. I grew up being a big fan of Dr. J (Julius Erving) and Mo (Maurice) Cheeks and the Sixers when I was younger. So that was a real nice high-energy and fun moment, for sure.

Q: Do you get to keep in touch with any of the Lafayette family, and do you hear from everyone who is excited every time they get to see you call a game on TV?

A: I actually am still really good friends with a handful of women who were my teammates when I was playing basketball at Lafayette. We have an ongoing text chain that we work on all the time, and I just got together with a bunch of them last year. My girlfriends from Lafayette came out for a game in Denver when I did a Monday Night Football game, and we hung out for a couple of days. They’re a great support to me, so that was really fun. They knew me way back when, so they’ve always done a good job of keeping me grounded and remembering the good old days at Lafayette.

Q: Do you have any other dreams for your career for games or special events that you haven’t gotten to call yet?

A: There’s always other things out there. I was really lucky this year. This past summer, I got a chance to call Olympic softball. That was something that I was able to check off my wish list, and that was a lot of fun. I grew up a big Yankees fan, and it would be great to call a game at Yankee Stadium or some of the iconic places around the country, like calling a football game at Notre Dame. I’ve been lucky to be a part of the Raiders family and the Chicago Cubs family. To be able to call games at Wrigley Field has been a blast. But you know, there’s always something else.

Meet the Patriot League's Player of the Year