From being a Girl Scout to becoming an EMT at age 17, Segalini has dedicated her life to helping others and credits Prof. Lisa Gabel for guiding her to a future in health care Twitter

It’s been said that big things come in small packages, and perhaps few know this better than Nicole Segalini ’21.

At only 23, the petite young woman has already packed more into her short life than most will experience if they make it to their golden years. As a teenage EMT, she delivered a baby on the floor of her patient’s home—earning her national news recognition. A few years ago, in the middle of her Lafayette education, her love of medical textbooks helped her self-diagnose her own pancreatic tumor. She’s co-authored two original scientific reports focusing on hospitalization during pancreatitis and surgical culture and musculoskeletal injury, and assisted with a published review article on primary palliative care for surgeons. More recently, she was honored with the President’s Volunteer Service Award (and nominated for the President’s Lifetime Achievement Award) for accumulating hundreds of hours of community service. 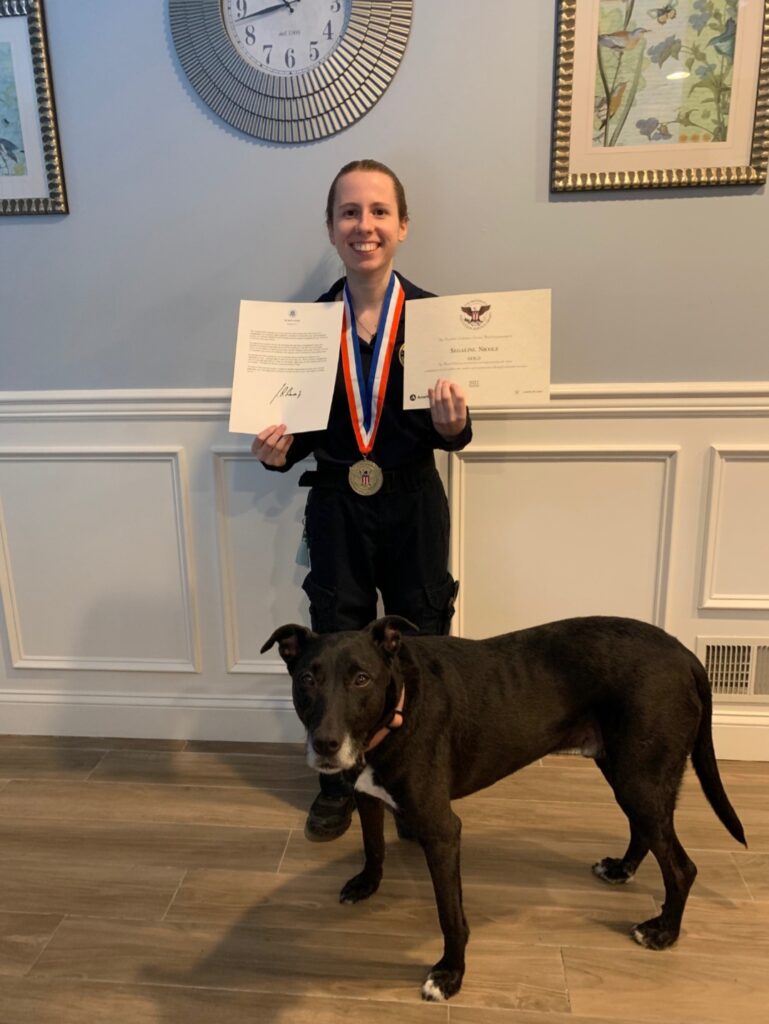 Nicole Segalini ’21 (along with her dog, Buddy) poses with the President’s Volunteer Service Award.

In reality, that number actually averages in the thousands. There is, however, nothing average about Segalini.

The 2021 Hoff Award winner, who completed a surgical student fellowship for Morristown Medical Center, also has acted as a surgical research assistant for both Tufts Medical Center and Tulane School of Medicine. She is currently participating in the medical and regulatory fellowship program at Advyzom, a leading consulting company for the pharmaceutical and health care industries.

Amazingly, Segalini’s many accomplishments are far from the topic she enjoys focusing on most. Rather, her enthusiasm bubbles over when discussing the person she says “means more to her life than almost anyone else.” That person is Lisa Gabel, professor and chair of Lafayette’s neuroscience program, and someone who became a lifelong mentor for Segalini on the day they first met.

“I met Dr. Gabel on my second day at Lafayette, and right away I knew that we were going to be friends. From that point forward, whenever I needed advice about anything, even if it was personal, she was the person I went to,” says Segalini, who worked as Gabel’s research assistant. “I always tell people that Lafayette is a great school, but my tuition was worth it just to learn with her. She’s an amazing asset, and, jokingly, I always say that I would sell the rest of my pancreas to learn in her class one more time.”

In fact, one of the first calls Segalini made when she landed in the emergency room during her sophomore year was to Gabel. With doctors assuming her abdominal pain was related to appendicitis, Segalini performed her own abdominal exam and felt what turned out to be a “softball-sized” mass under her ribcage. Worried about making it back to Lafayette when classes resumed after winter break, she consulted with her surgical oncologist to make her recovery period as brief as possible—getting her back to campus with few days missed, and further cementing Gabel’s unwavering support.

“Nicole is the most positive, energetic, enthusiastic person I’ve ever met,” says Gabel. “She just lights up any room she enters.”

That positive energy led to Segalini shadowing the surgeon who removed her tumor (Dr. Zubin Bamboat), which, in turn, has led to her eyes being opened to how she can help other young college and high school students. It’s a topic she hopes to write about while she works to determine her own future in medical school.

“I’ve only gotten through four years of college, but if I can lift someone up and get them to a point where they’re ready to start college in a few months or within a year, I want to be the person who inspires them to go to a professor and ask how they can work with them on research,” she says. “I want to give them the confidence they need to ask for those experiences.”

From being a young Girl Scout to becoming an EMT at age 17, Segalini has literally dedicated her life to the service of others. Raised in a family where her parents constantly reinforced the notion that they were in a position to help, she takes talk of awards and recognition in stride, and knows she is just one of many, many people who have held the health care industry together during a tumultuous two years of COVID-19.

“The award recognition was nice, but not expected,” she says. “Every health care system and pre-hospital system has been so stressed. There was such a huge increase in calls, and as volunteers, we don’t get paid. What’s been most rewarding for me has been the small things, like when a pediatric patient draws you a picture. I keep all of them. Things like that really mean a lot and reinforce why I was drawn to this field.”

“I’m super grateful to her for teaching me so much. My involvement with her lab will open a lot of doors”