Prof. Lisa Gabel and research students have developed a method to detect dyslexia before a child learns to read Twitter 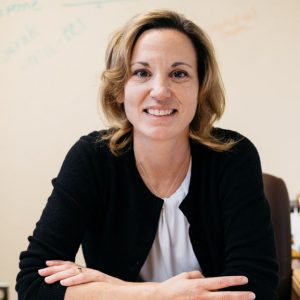 Dyslexia, a common learning disability that affects processing of written language despite adequate intelligence and emotional background, may cause affected children to experience long-term social and emotional problems that influence future aspects of their lives.

Six years ago, Lisa Gabel, professor of neuroscience and department chair, developed a two-year longitudinal study for students in her research program to understand the link between reading ability, maze-solving performance, and genetics in order to better understand the way children with reading impairments learn, and how that connects to genetic risk factors for dyslexia. The study focused on children from kindergarten to second grade.

The manuscript that Gabel and her co-authors—including Karla Cariño ’21—wrote as a result of that study has been accepted for publication in Developmental Neuroscience. Erin Murray ’19 and Kelsey Voss ’19 also co-authored the manuscript, and there are 11 other alums of the program whose work is acknowledged.

The study was funded by the National Institutes of Health (NIH) and the Pesky (Alan Pesky ‘T56, emeritus trustee) Foundation.

Why focus on dyslexia? Early intervention is essential in closing the reading achievement gap, so accurate and efficient early detection efforts are critical. Though past research has suggested that poor reading skills can be identified in first grade, the rate of false negatives in testing can be as high as 50%. As a result, many children who need early intervention don’t receive it.

“Early reading measures aren’t great at identifying kids with dyslexia, because when you go into kindergarten, you’re at various stages depending on what experiences you’ve had prior to kindergarten,” says Gabel. “We measure reading ability again in second grade when current reading measures are better able to identify those kids as either reading at their age and grade level or not. Comparison of performance on the maze task in kindergarten and second grade, and comparing that to reading ability, demonstrates that our maze task is able to detect future reading impairment before the child learns to read.”

Students have been involved every step of the way, Gabel says, including both neuroscience students and computer science students working together to develop the maze. Cariño was one whose heavy involvement included organizing all of the data, which included reading measures spanning multiple grades, districts, and years. Students who worked with Gabel year after year also helped her train students new to the study.

“Karla always works so hard, and she really went above and beyond. I would give her stacks of data to enter on the reading measures, and she would be done and on to the next batch in. I just kept giving her work because she was really insatiable in that way,” says Gabel. “She’s been in the lab for a few years, and she was really excited about English as a second language (ESL) projects, and how this tool may be used to predict reading ability in ESL students since the task does not require knowledge of a specific language.”

Cariño also recently met an American Sign Language interpreter who helped her realize how valuable the tool could be for those who are hearing impaired. This discussion actually led to her changing her final paper to focus more on how this task could be utilized for that particular population.

“I think my research with her really came full circle,” says Cariño. “I ended up doing research on my own as a result, on anxiety and dyslexia, early life stress on learning and memory, and now currently researching the relationship between a hearing disability and reading disorders. Something really cool about Prof. Gabel’s work is that with the mazes, you’re not using letters or words. It’s just the mazes, and that could be really beneficial for people who are deaf or hard of hearing.”

With the first study complete and in publication, Gabel plans on writing a renewal for the NIH grant, and continues to wait for news about a patent for the maze—a process that began when she submitted the patent application five years ago.

“Currently, it can take months to receive testing for a potential learning disability in schools, due to the training necessary to conduct and analyze the results of traditional reading measures. We’ve created an online version of the task with the hope, in the future, of allowing anyone with a computer, and Wi-Fi access, the ability to complete the maze task,” says Gabel.  “We’re hoping to give them results in real time, which would suggest whether the user should seek additional support for potential reading impairment. This could help streamline the process in schools, which could lead to earlier interventions, and better outcomes for children.”