On April 18, Trustee Emeritus Alan Pesky ’56 will be making his first visit to Lafayette College as a published author.

From noon to 1 p.m. in the Marlo Room at Farinon College Center, the campus community is invited to a fireside chat where Pesky will discuss his recently published memoir, More to Life than More: A Memoir of Misunderstanding, Loss, and Learning (Skyhorse Publishing), which chronicles his relationship with his son, Lee Pesky ’87, who had learning disabilities as a child and died unexpectedly of brain cancer at age 30.

The conversation will be moderated by Lisa Gabel, professor, William C. ’67 and Pamela Rappolt Scholar in Neuroscience and department chair, whose research in the early detection of dyslexia has been supported by Alan and Wendy Pesky, who founded the Lee Pesky Learning Center in 1997 in memory of their son.

Dedicated to understanding and helping those with learning disabilities, the nonprofit center in Boise, Idaho, works with families and schools to overcome obstacles to learning and has helped more than 100,000 children. The organization is nationally known for its efforts in diagnosis, remediation, research, and teacher training. 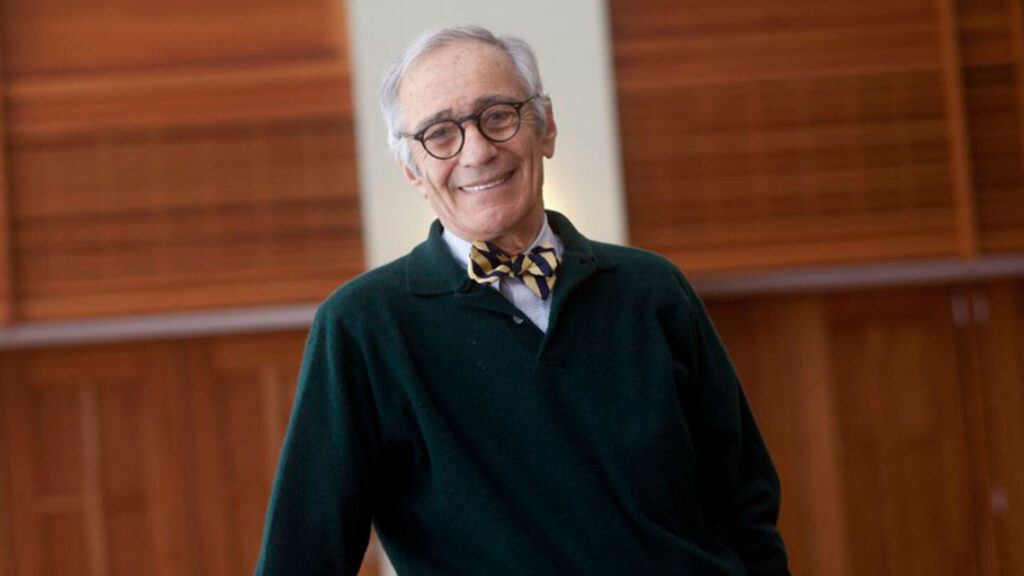 On April 18, Trustee Emeritus Alan Pesky ’56 will discuss his recently published memoir during his visit to Lafayette.

From his home in Ketchum, Idaho, Pesky, who had a successful career in advertising and publishing, took time recently to talk about his upcoming visit.

“This is my first book, and it covers a very sensitive issue with the loss of a child and misunderstanding learning disabilities,” he says. “It goes back into the entire history of my life. I’m 88 years old now, so there’s a lot going on.”

The idea for a book came about when a friend who was head of MacMillan Publishing approached and encouraged Pesky to write about his exciting business career, loss of his son, and the establishment of Lee Pesky Learning Center.

“I don’t want to write a book. I am too old to write a book,” Pesky recalls saying. “It kept coming up. And I finally said that I can’t find the time. I could write an essay or an op-ed piece, but to sit down and write a couple hundred pages, it just isn’t there.”

A ghostwriter was recommended by his friend at MacMillan, but Pesky didn’t feel comfortable opening up his life to him.

“I spoke with a few more possible collaborators, but didn’t connect with any of them,” he recalls. “Sometime later, the executive director of the Community Library in Sun Valley, who knew I was looking for someone to write with, suggested a local writer, Claudia Aulum.

“Claudia had never written a book before. But she’s very bright, went to the School of Foreign Service at Georgetown, and had a very interesting career,” Pesky says. “And, after doing a lot of different things, she decided she wanted to become a writer. We sat down and talked. We had about three or four meetings when things started to click, and I looked at her and said, ‘You know, I think I could write with you.’”

Pesky gave her a list of about 30 to 40 people: family members, friends, a Lafayette alumnus, and business colleagues to contact in order to get an unbiased look into his background

“I told them, you’re going to get a phone call about my memoir; please open up and talk with her,” he says, “After spending about three months doing that, she and I started to work together.

“We started putting stuff down on the page. And she did a brilliant job,” Pesky says. “When you read it, you’ll see it’s not a straight line. The chapters go in and out. You will see something about my business career in chapter five. But then you won’t see it again until chapter eight. The reaction from those who have read the book could not be more positive, far beyond anything I ever anticipated.”

Kirkus Reviews, a leading book critic, describes the book as “an articulate, unflinchingly honest, and touching account brimming with joy, heartbreak, and love.”

“That just blew me away,” Pesky says. “I’ve received more than 200 letters or emails from people who have said, ‘You know, I read your book and it really affected me.’ People tell me how it touched them emotionally, in terms of their relationship with a son or daughter.”

“You’re going out there to achieve your primary goal in life, which is to make a lot of money and climb the corporate ladder,” he says. “And you forget about the fact that you’ve got a family, a wife, children, and community where you live. Twenty years from now you’re going to sit back and those relationships are going to be the most important thing in your life, not the fact that you climbed the ladder and made a lot of money, but along the way lost your family. Just remember — there is no success in business that can compensate for failure at home.”

Born in the Bronx, Pesky attended and captained the basketball team at Jamaica High School in Queens, at the time the largest public high school in the United States with about 7,000 students. A neighbor of his was aware of Lafayette and started talking to Pesky about it. “It sounded like a great place, and I got in,” he remembers, adding that college guidance wasn’t discussed in his blue-collar home.

“ I’m very proud of my early background,” says Pesky, who after graduating from Lafayette, served two years as an infantry officer, and then earned an MBA from Tuck School of Business at Dartmouth College. “My parents gave me a very sound grounding in integrity and honesty, and encouraged me to work hard.”

Those ethics instilled in him served him well at Lafayette, which has been part of his life for more than 70 years. His son Gregory ’90, like his brother Lee ’87, graduated from Lafayette.

“You can get close to Lafayette without feeling like you’re just one of thousands of students,” he says. “I have great appreciation for what it did for me, and how it’s treated me in the years since I graduated. It’s a warm, supportive institution and encourages you to pursue opportunities. I took advantage of that.”

The work, mission, and success of Lee Pesky Learning Center has been an important part of Pesky’s life.

Gabel, who has three children with dyslexia, was moved when Pesky sent her a copy of his book.

“I sat there on my vacation, and I couldn’t put it down,” she says. “I would laugh out loud, and I cried.”

First introduced to Pesky by Adam Stauffer, associate vice president for development, Gabel began discussing ways to take her research in neurodevelopmental disorders from the lab to humans.

“I must have told Alan a thousand times that theory and practice don’t always work,” she says. “At that point I only had an idea, a hypothesis, and I didn’t want him to invest his money into this project thinking that I could guarantee the desired outcome.”

But Pesky was on board from the start, supporting the research project, which later received funding from the Humboldt Foundation in Germany and the National Institutes of Health in the United States.

“Alan not only supports with his money, but also his time,” says Gabel, noting that after they met, he connected her with staff at the Lee Pesky Learning Center to help her to expand her network and access to schools.

“I’ve been studying dyslexia for years and looking at it from the lens of a researcher to a parent, and reading some of the things that he wrote in this memoir, it’s really touching and it’s very vulnerable,” she says. “He puts himself out there and talks about not only the things that he did, but also about ways in which he needed to improve, and his struggles as a parent with a child with a learning disability.”

Gabel says she can’t think of any discipline on campus that wouldn’t be attached to some aspect of Pesky’s life.

“The fact that Alan wrote a memoir might appeal to aspiring writers. And then there’s the entrepreneurship aspect, where he started an advertising company and a publishing business,” she says. “Then he came up with the idea of the learning center out of the tragedy of losing his son at an early age and wanting to do something to help people with learning disabilities.

“Alan has seemingly done it all. He’s just amazing to me,” Gabel adds. “Any student, whether you’re an engineer, an English major, or a budding entrepreneur, perhaps have a background in economics or examining this information from my perspective — neuroscience, psychology, and biology, there’s going to be something for everybody.”